The dragons of the City of London

Since the early 17th century a pair of dragons has supported the crest of the City of London in its coat of arms; and in the latter part of the 19th century orna­mental boundary markers were erected at points of entry into the City, each surmounted by a dragon clutching the heraldic shield.

The dragons’ intro­duc­tion seems to have derived from the legend of St George – whose cross has been a City emblem since at least the early 14th century – and may have been specif­i­cally linked to a popular miscon­cep­tion that a fan-like object bearing the cross on an earlier crest was a dragon’s wing.

The City dragon is often incor­rectly called a griffin, or gryphon, even in some official liter­a­ture. It is not clear how the confusion arose but the misnomer has become so entrenched that some author­i­ties consider it to have earned a degree of legit­i­macy. This espe­cially applies to the statue at Temple Bar, where West­min­ster’s Strand becomes the City’s Fleet Street. The term ‘east of the Griffin’ was once commonly employed to mean ‘east of Temple Bar’, i.e. in the City of London:

“If something unex­pected did not happen, it meant another visit to a little office he knew too well in the City, the master of which, more than civil if you met him on a race­course, … was quite a different person and much less easy to deal with east of the Griffin.”

Alfred Watson: Race­course and Covert Side (1883) 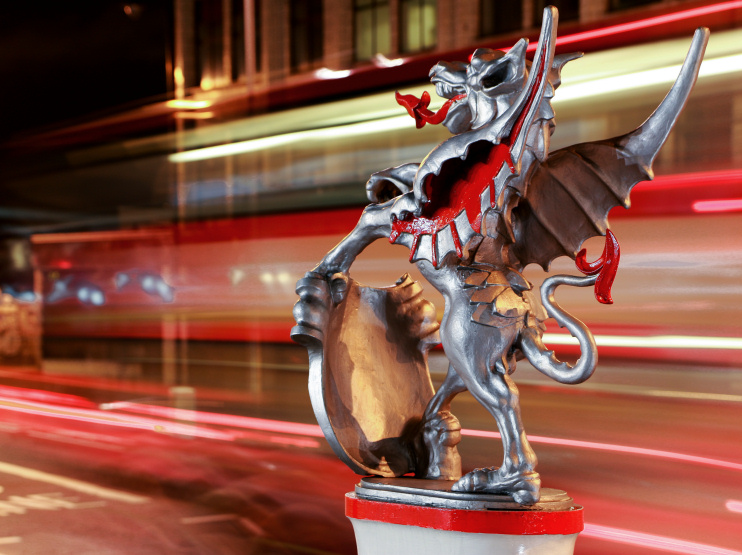 * The picture entitled City Guardian, above, is cropped and slightly modified from an original photograph, copyright Barney Moss, at Flickr, made available under the Attribution 2.0 Generic licence. Any subsequent reuse is freely permitted under the terms of that licence.