The former home of London’s newspaper industry; its name is still used as a generic term for the national press 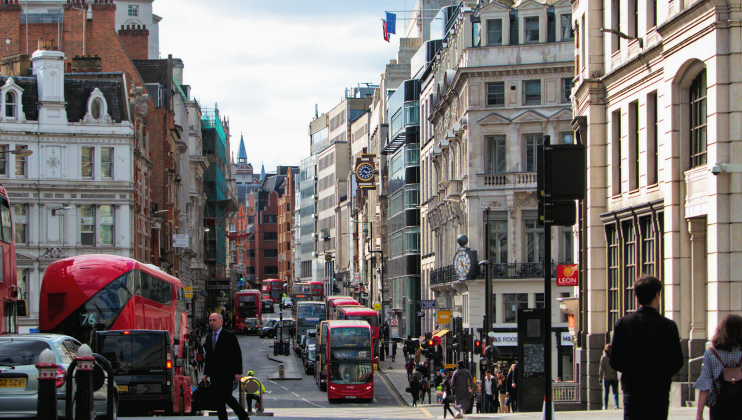 The street orig­i­nally emerged from the western edge of the City of London, crossed the River Fleet via a small island at present-day Ludgate Circus and led to West­min­ster via the Strand. The river was later covered over after it became an open sewer.

Fleet Street’s asso­ci­a­tion with printing began in 1500 with the pioneer Wynkyn de Worde, who produced nearly 800 books from his offices near Shoe Lane. The printing industry flour­ished here over the next 200 years but it was not until the beginning of 18th century that the first daily news­pa­pers were published.

Fleet Street at this time was a fran­ti­cally busy part of the connecting route between the twin centres of London. It has been called ‘a double street’ because there was as much going on in its alleys and passage­ways as on Fleet Street itself. Protruding sign­boards were mounted above every doorway; one of these fell down in 1718 and killed four people, including the king’s jeweller.

Dr Samuel Johnson lived in Gough Square from 1748 until 1759, and it was here that he compiled the first compre­hen­sive English dictio­nary. Now restored to its original condition, the house has panelled rooms, a pine staircase, and a collec­tion of period furniture, prints and portraits. Outside there’s a statue of the lexicographer’s cat, Hodge. Johnson and Boswell whiled away many an hour in the Cheshire Cheese, a Fleet Street inn that has changed little to this day.

By the early 19th century Fleet Street’s news­pa­pers had achieved massive circu­la­tions among both the working and middle classes. Publi­ca­tions ranged from scandal sheets like John Bull, through William Cobbett’s polemical Political Register to The Times, which increased its size to eight pages in 1827. The Daily Telegraph arrived late on the scene in 1855 but soon outsold The Times. The Evening Standard evolved out of its daily coun­ter­part in 1860.

The press drove out most of Fleet Street’s other busi­nesses, espe­cially after regional news­pa­pers like the Yorkshire Post and Manchester Guardian began to open London offices here.

In the first half of the 20th century the number of national news­pa­pers halved from its peak of around two dozen, while several of the survivors built imposing printing works, of which the finest is the art deco Daily Express building of 1932 (pictured), clad in black glass, with a cinema-style foyer.

All the major news­pa­pers relocated their offices and printing works during the 1980s. News agency Reuters remained until 2003. Now the street mixes manage­ment consul­tants and invest­ment special­ists with shops and takeaways at street level to serve office workers.

Sweeney Todd, the Demon Barber of Fleet Street, first achieved celebrity as the central character of The String of Pearls, an anonymously authored serial published in 1846/7 in the People’s Periodical and Family Library. This was immediately adapted into a play by George Dibdin Pitt. Much later it became a Stephen Sondheim musical and a Tim Burton film. Despite claims to the contrary, the story has no basis in fact.

* The picture entitled Fleet Street Afternoon at the top of this page is adapted from an original photograph, copyright Henry Zbyszynski, at Flickr, made available under the Attribution 2.0 Generic Licence. Any subsequent reuse is hereby freely permitted under the terms of that licence.