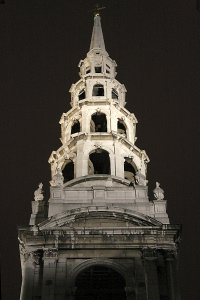 It is possible that a Roman building on this site was a place of Christian worship. A church was first built here in the 6th century and dedicated to St Bridgit or St Bride of Kildare. It was rebuilt in the 12th century and again in the 15th.

Following its destruc­tion in the Great Fire of London, the church was rebuilt yet again (1672–4), this time by Christo­pher Wren, who in 1701–3 added a steeple that made this his tallest City church. Its shape does not merely resemble a very sharply pointed wedding cake, it is said to have inspired its invention.

St Bride’s was bombed to a shell on the night of the ‘Second Fire of London’ during the Blitz – but the steeple survived.

The church, which has been dubbed ‘the cathedral of Fleet Street’ – and nowadays calls itself ‘the spiritual home of the media’ – was restored with the financial support of the newspaper industry and reded­i­cated in 1957. New side aisles made of English and European oak were installed in 2004, offering better views for large congre­ga­tions while preserving the church’s character.

Memorial services are often held here for media industry people. The Jour­nal­ists’ Altar in the north-east corner carries prayers for reporters who are missing or who have lost their lives in current conflicts.

In 2013 work began on restoring St Bride’s iconic spire, which is suffering badly from erosion and staining, and from the rusting of Wren’s original iron cramps, which is breaking stone faces apart. Further donations are needed for the work to be completed – but when Hidden London last checked St Bride’s website (February 2019) there had been no update on the progress of the appeal since 2015.

The church is usually open to the public throughout the day from Sunday to Friday. Guided tours are available.