A former Roman road and now the City of London’s highest rising street, with office towers clustered around its southern half 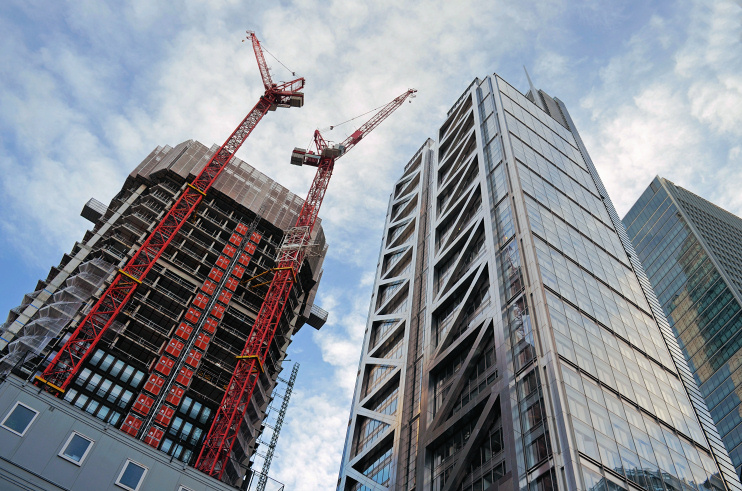 Bish­ops­gate runs north from Gracechurch Street to Norton Folgate. The gate in the city wall was called ‘Porta Episcopi’ in Domesday Book, and this was angli­cised as Bish­ops­gate by the 12th century. It is said that the name refers to Saint Erkenwald, who was Bishop of London for eleven years in the late seventh century.

Houses began to appear on both sides of the gate in the 13th century and by the 16th century the whole road was lined with buildings, including the merchants’ resi­dences of Crosby Place and Gresham House and the churches of St Botolph, St Helen and St Ethelburga.

Like many of the gates in the City wall, Bish­ops­gate was demol­ished in 1761. Contin­uous rebuilding has left nothing of the medieval street except for the core fabric of the surviving churches.

Shored­itch station opened in 1840 to serve as the London terminus of the Eastern Counties Railway. It was renamed Bish­ops­gate in 1847 and was replaced by Liverpool Street station in 1874, after which the old terminus was converted to a goods station. Shored­itch High Street station now occupies its site (which is beyond the top of the map below).

The most pleasing remnants of the Victorian era are Dirty Dick’s pub (which is not as dirty as it used to be) and the edifying Bish­ops­gate Institute, both near Petticoat Lane. Crosby Place’s great hall survived until 1908, when, threat­ened by the prospect of demo­li­tion, it was taken down and rebuilt on Cheyne Walk in Chelsea.

Since the 1960s the construc­tion of a succes­sion of office blocks and towers has made Bish­ops­gate one of the City’s most unashamedly commer­cial thoroughfares.

At its northern end the Broadgate complex borders the street’s west side. The NatWest Tower was completed on the site of the former Gresham House in 1981, when it was Britain’s tallest building. A bird’s eye view reveals the tower to be designed in the shape of the National West­min­ster Bank’s symbol: three inter­secting chevrons forming a chopped-cornered triangle. The bank moved out in the early 1990s and the building has been renamed Tower 42.

In 1993 a massive IRA truck bomb killed a freelance photog­ra­pher and caused £350 million worth of damage when it exploded outside 99 Bish­ops­gate. This marked the culmi­na­tion of a terrorist campaign against City targets, prompting the Corpo­ra­tion of London to create the so-called ‘ring of steel’ that reduced access to the central part of the City and placed police check­points on the remaining routes.

East of Bish­ops­gate the building formally called 30 St Mary Axe was completed in 2004 on the site of the Baltic Exchange, which had been the victim of another IRA bomb. This bulbous tower is commonly known as ‘the Gherkin’.

In 2011 Bish­ops­gate acquired the City of London’s latest tallest building, Heron Tower (110 Bish­ops­gate). Its roof height was soon exceeded by that of the Cheeseg­rater, but Heron Tower’s 28-metre spire permitted it to maintain an air of supe­ri­ority. The tower is shown in the photo at the top of this article, with the under-construc­tion One Bish­ops­gate Plaza to its left.

Since it topped out in May 2019, a 62-storey tiered tower at 22 Bish­ops­gate has been the City’s undis­puted tallest building and second only to the Shard in London as a whole. ‘Twentytwo’ (as it was earlier called, though ‘22’ now seems to be preferred) was completed in 2020 and is shown in the photo below, which was taken on 20 October 2020. 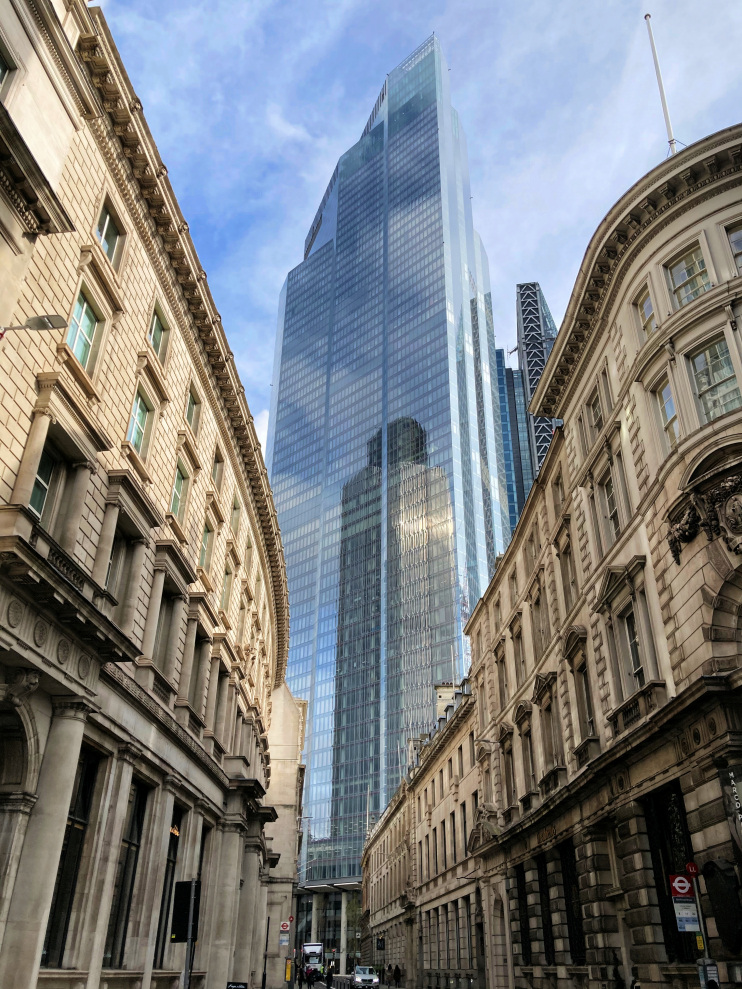 A tax record for 1596 notes that William Shakespeare was lodging in the parish of St Helen’s, Bishopsgate. There is no confirmation that this was the Bard himself – but it probably was. In 2019 theatre historian Geoffrey Marsh claimed to have pinpointed the exact location: a house overlooking St Helen’s churchyard. Shakespeare was familiar with Crosby Place and used it as the setting for Gloucester’s plotting in Richard III.