The cathedral of the diocese of London and Britain’s best-loved building, crowning Ludgate Hill 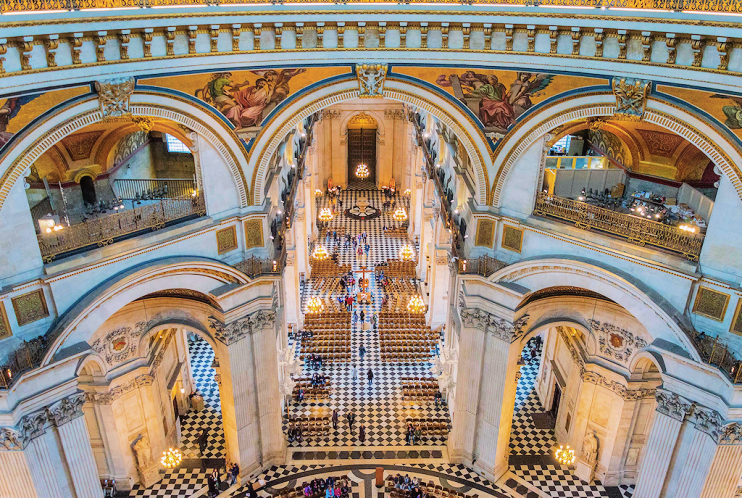 There may have a Roman temple here, perhaps dedicated to Diana, and the first St Paul’s Cathedral was founded in 604, probably by Mellitus, Bishop of London, at the request of King Ethelbert of Kent. It was rebuilt in 962 following Viking raids.

In 1087 ‘old’ St Paul’s was begun in grand Norman style – and its comple­tion took over 200 years. Throughout the Middle Ages and beyond, the cathedral’s costs were met by tithes levied on tenants of its extensive land­hold­ings. The ways in which the cathedral’s preben­daries managed the estate, resisting or encour­aging devel­op­ment, influ­enced the growth of several of modern London’s suburbs.

In 1509 Dean Colet estab­lished St Paul’s school in the church­yard. Colet’s generous endowment helped make it the largest school in England, with 153 scholars – a biblical reference to the ‘mirac­u­lous draught of fishes’ (John 21:11) – who were all taught in one large room, sometimes divided by curtains. The school is now located in the Castelnau area of Barnes, while the cathe­dral’s choir school is still based in the shadow of St Paul’s.

Old St Paul’s (often known simply as Paul’s) burned down in the Great Fire of 1666, after which Sir Christo­pher Wren was commis­sioned to produce a design for a new cathedral, which was completed in 1710. The cathedral is built of Portland stone and surmounted by a dome inspired by St Peter’s Basilica in Rome, with an acousti­cally conduc­tive Whis­pering Gallery that runs around its interior circumference. 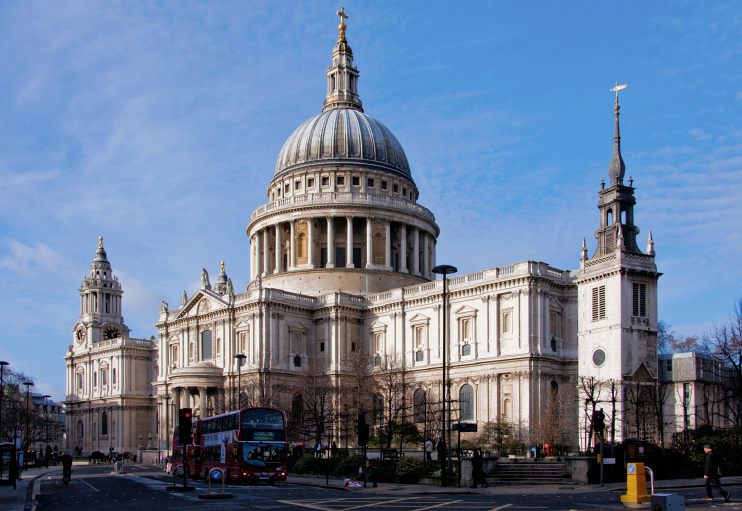 “It is true, St Peter’s [Basilica, Rome], besides its beauty in ornament and imagery, is beyond St Paul’s in its dimensions, is every way larger; but it is the only church in the world that is so; and it was a merry hyperbole of Sir Christopher Wren’s, who, when some gentlemen in discourse compared the two churches, and in compliment to him, pretended to prefer St Paul’s, and when they came to speak of the dimensions, suggested that St Paul’s was the biggest: I tell you, says Sir Christopher, you might set it in St Peter’s, and look for it a good while, before you could find it.”

Daniel Defoe, Tour Through the Whole Island of Great Britain (1725)

St Paul’s famously survived bombing raids during the Blitz, thanks to good fortune and the valiant efforts of fire­fighters. Herbert Mason’s photo­graph of the smoke-wreathed cathedral, taken on the night of 29/30 December 1940, is widely regarded as the most evocative image of London during the war.

The cathedral is used for great national occasions, such as thanks­giv­ings for victory and monarchs’ jubilee services. The state funeral of Sir Winston Churchill took place here in 1965 and Prince Charles married Lady Diana Spencer at St Paul’s in 1981.

Many distin­guished Britons are buried in St Paul’s capacious crypt (believed to be the longest in Europe), most notably national heroes Nelson and Wellington. It is also the last resting place of the cathedral’s architect, above whose tomb is the inscrip­tion (composed by his son) Lector, si monu­mentum requiris, circum­spice (‘Reader, if you seek his monument, look around you’).

The cathedral is toured by 1.5 million visitors every year, while many more simply jump off their sight­seeing coaches, pose for a photo­graph and move on. 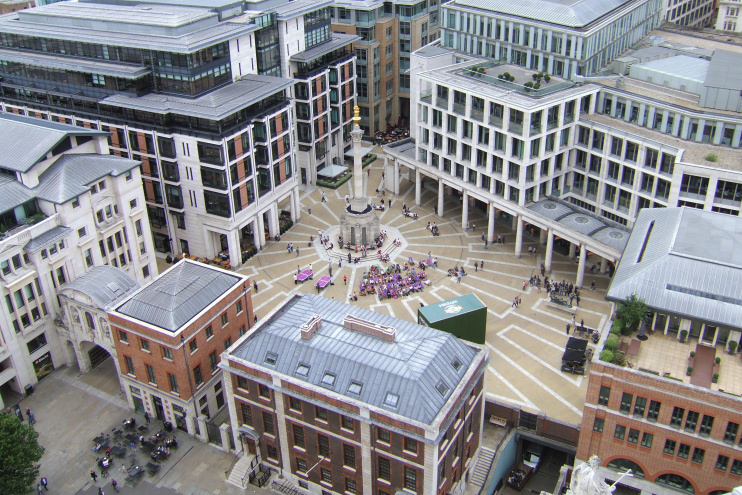 Shown in the photo above, the neigh­bouring Pater­noster Square devel­op­ment of offices and shops was a 1960s blight on the cathedral’s beauty, but in 1993 plans were approved for a replace­ment project of clas­si­cally designed buildings, which gained the endorse­ment of the Prince of Wales. The recession in the property market delayed imple­men­ta­tion but work was completed in 2003. The following year the London Stock Exchange relocated to new head­quar­ters at 10 Pater­noster Square, and Temple Bar was re-erected near the cathedral’s north-west tower. This Portland stone arch had served as a gateway to the City of London for two centuries but was removed to a Hert­ford­shire park when its narrow­ness began to cause traffic congestion.

Modern Freemasonry began on 24 June 1717, when four London fellowships met at the Goose and Gridiron alehouse in the churchyard of St Paul’s Cathedral and founded the world’s first Grand Lodge.

all round St Paul’s, not forget­ting the trunkmaker’s daughter A book­sellers’ catch­phrase, used in the late 18th and early 19th centuries when referring to unsaleable books. The St Paul’s area was at that time well known for its bookshops and the ‘trunk­maker’ was a nickname for the repos­i­tory of unwanted literature.

Amen Corner A site at the western end of Pater­noster Row where the clergy of St Paul’s Cathedral finished the Pater­noster (the Lord’s Prayer) on Corpus Christi Day as they went in proces­sion to the cathedral. They began the prayer in Pater­noster Row and continued it to the end of the street, and they said Amen at the corner of the Row. On turning down Ave Maria Lane they began chanting the Hail Mary, then, crossing Ludgate they entered Creed lane chanting the Credo. Amen Corner was destroyed in an air raid on 28 December 1940.

as old as Paul’s (steeple) or St Paul’s The reference was to the earlier incar­na­tion of St Paul’s Cathedral, which dated from the late 11th century and burned down in the Great Fire of London.

Dance of St Paul’s A painting on the wall of a cloister that lay within the precinct of the old St Paul’s Cathedral. It was paid for by John Carpenter, town clerk of London, and depicted a ‘Dance of Death’, an alle­gor­ical repre­sen­ta­tion of Death leading people to the grave in order of social prece­dence, accom­pa­nied by trans­la­tions of French verses by John Lydgate. The cloister was pulled down by Edward Seymour, 1st Duke of Somerset in the reign of Edward VI and the materials employed in the erection of his own palace in the Strand. The painting was lost and, contrary to an oft-repeated rumour, there is no copy in the Lambeth Palace library.

Pardon church­yard A medieval church­yard that lay within the precinct of St Paul’s and contained a chapel and a cloister painted with the Dance of Death (see above). It continued to be known as Pardon church­yard after its conver­sion to a garden following the destruc­tion of the cloister in 1549. It was built over c.1650.

Pater­noster Row A street in the City of London, north of St Paul’s Cathedral. It was probably so named from the rosary or pater­noster makers who lived and worked here from the Middle Ages. There is mention as early as 1374 of a Richard Russell, a ‘pater­nos­terer’, who dwelt there, and archives tell of ‘one Robert Nikke, a pater­noster maker and citizen’, in the reign of Henry IV. Another sugges­tion is that it was so called because funeral proces­sions on their way to St Paul’s Cathedral began their Pater noster (chanting of the Lord’s Prayer) at the beginning of the row. By the end of the 16th century it was also the home of book­sellers and publishers, and it remained a centre of the publishing business for over 300 years, until it was devas­tated in an air raid on 28 December 1940. About 6 million books were destroyed.

Pauline In a London context, the word usually refers to an alumnus of St Paul’s school. A Paulina is an alumna of St Paul’s girls’ school.

Paul’s man A braggart; a captain out of service, with a long rapier; so called because the walk down the centre of the old St Paul’s was at one time the haunt of such char­ac­ters, who were also known as Paul’s walkers. Ben Jonson called Captain Bobadil a Paul’s man in the dramatis personae of Every Man in His Humour (1598).

Paul’s or St Paul’s Cross A pulpit in the open air situated on the north side of old St Paul’s Cathedral, in which, from 1259 to 1643, eminent divines preached in the presence of the lord mayor of London and aldermen every Sunday. Heretics were forced to recant here and Protes­tant books were burned. It was demol­ished in 1643 by order of Parlia­ment. A memorial, erected in 1910, is surmounted by a gilded statue of St Paul holding a cross.

Pol’s Stump An alter­na­tive name for the original Paul’s cross (see above). Some have suggested that ‘Pol’ was not a corrup­tion of Paul but of Apollo or the Nordic sun god Balder, or some blend of the latter two, and that the stone stump was a place of pagan worship before early Chris­tians mounted a cross upon it.