Every informed source agrees that the bas-relief mounted on a wall in Panyer Alley is a cherished heirloom of the City of London. But there the concord ceases. The scale and scope of the disputes regarding the prove­nance and chronology of this simple stone tablet bear witness to the fog of uncer­tainty enshrouding much of London’s history before the better-docu­mented 18th century.

First, why is Panyer Alley so called? Writing in the late 16th century, John Stow claimed that it took its name from a sign depicting a baker’s boy sitting on his bread basket. Was this the same effigy that exists today or an earlier version of it? Either way, others have been sure that the alley was named after The Panyer, an inn that stood around the corner in Pater­noster Row. Its last incar­na­tion is said to have burned down in the Great Fire of London in 1666.

Was the present-day Panyer Boy created as a sign for that tavern? Perhaps, if the sculpture pre-dates the inscrip­tion beneath it. Was it intended as “an emblem of plenty”, as some have proposed? Was this the site of an early medieval corn market or did the stone commem­o­rate the boys who once sold bread from baskets in this alley? John Stow thought the boy recalled the presence of a bread market in nearby St Martin’s le Grand.

What does the stone depict? Most author­i­ties have been in no doubt that the boy is sitting on a bread pannier but others have supposed it to be a fruit basket or a woolsack, while one commen­tator felt that it “resembles more a coil of rope.” Some experts have proposed that the illus­trated infant is a young Bacchus, the god of wine and asso­ci­ated fun, and the suggested link with The Panyer may bear this out. What is he doing with his outstretched hands? The stone is now so eroded that it’s impos­sible to tell. Old engrav­ings show more detail but still don’t resolve the matter. One expla­na­tion so took the popular fancy that for a while the stone was known locally as “the Pick-my-toe”. More serious observers have claimed that the boy is either taking a loaf from the basket or pressing a bunch of grapes between his hands and one foot. Is he in the process of eating that “very ques­tion­able bunch of grapes”, as the noted London academic John Camden Hotten mooted?

Has the stone ever been mounted at the highest point in the City, as its inscrip­tion avers? Most experts think not, but it’s hard to be sure because centuries of construc­tion, demo­li­tion and recon­struc­tion in the City have progres­sively raised the height of many roadways. Without mechan­ical assis­tance it was easier in the past simply to build on top of crushed rubble rather than remove it. Discov­eries of Roman remains indicate that ground levels in many parts of the City were once at least ten feet lower than they are today, and more than twenty feet in some places.

Measure­ments taken in the 19th century demon­strated that Panyer Alley at that time fell one foot short of being the City’s highest point. The true accolade went to the site of the Standard, in Cornhill, to which London’s first ‘arti­fi­cial forcer’ brought water from the Thames in 1582, and the point from which distances from London used to be measured. But nearby St Peter upon Cornhill may formerly have occupied London’s summit, which would explain why this ancient church stands where it does.*

Whether or not the ground beneath the Panyer Boy has moved, the stone certainly has: it has been remounted – not in the same spot – each time its host building has been replaced over the centuries. For many years it sat at ground level, let into a wall between two houses. When one of those houses was pulled down in November 1892 and rebuilt a few months later, news­pa­pers reported that “a rich American” had tried to bribe one of the workmen to let him have the Panyer Boy. The workman alerted the author­i­ties and a police guard was placed on the stone until it was firmly re-embedded. 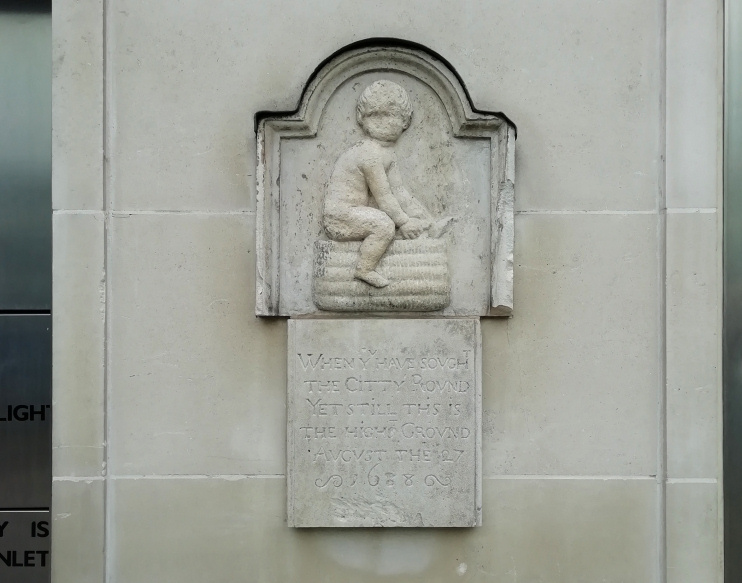 * Nowadays, the highest point in the City of London is the junction of Chancery Lane and High Holborn, right on the City’s border with the London Borough of Camden. This point is 22 metres (just over 72 feet) above sea level. This is so much higher than Cornhill’s 17.7 metres (58 feet) that Hidden London suspects it has been the highest point for a long time but wasn’t included in earlier rankings because a) it lay well outside the City walls and b) it was merely a point on a slope that rises still higher to its north-west (outside the City) – rather than a prestigious little summit.