The three devils of St Peter

The Cornhill Devils, 54 and 55 Cornhill, City of London

The square mile of the City of London has distinct hills and valleys, although their slopes are gentle and the natural topog­raphy is nowadays over­shadowed by man-made struc­tures. To the earliest settlers here, the undu­la­tions of the landscape would have stood out far more clearly than they do today and the uppermost spots were routinely chosen as sites for places of worship.

The City’s highest natural eleva­tions are the crests of Cornhill and Ludgate Hill. St Peter’s church was built upon the former and St Paul’s Cathedral atop the latter – on the site of an earlier church, which was probably preceded by a Roman temple dedicated to Diana.

The first incar­na­tion of St Peter upon Cornhill is said to have been the earliest place of Christian worship in Britain. Many author­i­ties dismiss this as a myth and it’s almost certain that the story that King Lucius founded St Peter’s in AD179 (other sources say 187) is bogus, as is the claim that it remained the chief Christian church of the kingdom until the estab­lish­ment of Canter­bury Cathedral more than 400 years later.

Never­the­less, there’s plenty of evidence that St Peter’s has a very long history, although the present structure dates from its recon­struc­tion by Sir Christo­pher Wren following the Great Fire of London.

Despite its impor­tance, St Peter’s is now almost hidden from view at street level by the office blocks that have gradually enveloped it – a sequence of events that no doubt dismayed succes­sive rectors.

Late in the 19th century, so the story goes, one vicar achieved a small victory over the devel­opers when he examined the plans for a new neigh­bouring building and found that it would intrude frac­tion­ally onto the church’s property. The architect was forced at great cost to redraw the plans and, by way of revenge, he added three fiendish terra­cotta figures, two large and one small, glaring down from the upper reaches of his new building. One of the grotesques is said to have been modelled on the offending vicar, although if this is true he must have been a very ugly man indeed. 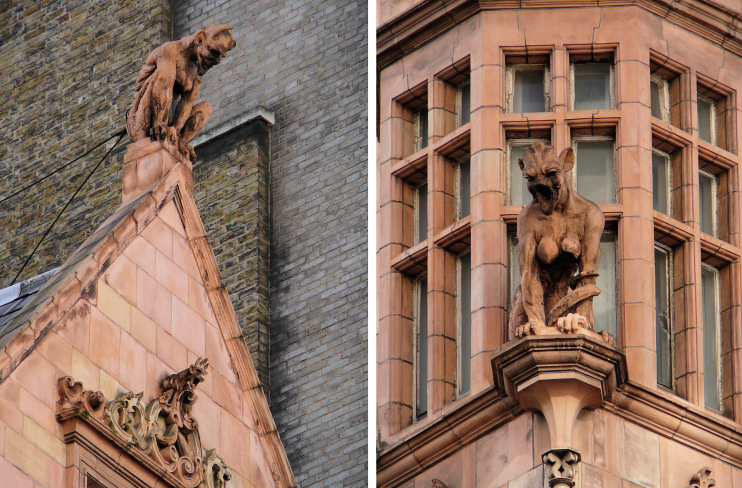