A shining example of gluttony

The Great Fire of London broke out in the early hours of Sunday, 2 September 1666 at the bakehouse of Robert Farryner (or Farriner) in Pudding Lane, Thames Street. Aided by high winds, it spread from the Tower of London to Temple Bar and from the Thames to Smith­field. St Paul’s Cathedral and 87 other churches were destroyed, as were 13,200 houses.

In five days the fire consumed 373 acres within the City walls and 63 acres without – yet only six deaths were attrib­uted to it, although more may have gone unrecorded. The blaze was halted by blowing up houses at Pye Corner – at least so it is said, although some have suggested that this version of history is a little too conve­nient, with its neat bookends of the fire beginning in Pudding Lane and ceasing at Pye Corner (or Pie Corner, as it was sometimes spelt).

Pye Corner was the name given in those days to the junction of Cock Lane and Giltspur Street and it may have orig­i­nated from an inn sign depicting a magpie.

Giltspur Street was first recorded with this name in the mid-16th century. It seems likely to derive from the earlier presence of spurriers, whose wares were in demand for the medieval jousting tour­na­ments held at Smith­field and Cheapside. Gilt spurs were also buckled to a man’s heels as part of the ceremony of making him a knight.

Cock Lane had a far less reputable history. First recorded around 1200, its name probably signified a lane where fighting cocks were reared and/or sold. In the late Middle Ages Cock Lane was the only place north of the Thames where brothels – or ‘stews’ – were legally sanc­tioned. William Langland’s Vision of Piers Plowman (late 14th century) contains a reference to one “Clarisse of Cokkes lone” [sic]. In Shakespeare’s Henry IV, Part 2, Falstaff is accused of contin­u­ally going to Pye Corner “to buy a saddle” – probably an oblique reference to his patronage of the brothels.

A ‘Pye Corner muse’ was an old term for a writer of doggerel who was inspired by little more than the odours of the cooks’ stalls at that location.

Such was the degree of religious prejudice at the time of the Great Fire that Roman Catholics were widely blamed for having started it as part of some trea­so­nous plot. A Frenchman, Robert Hubert, uncon­vinc­ingly confessed to setting fire to the bakehouse and was hanged at Tyburn. The Monument was built to commem­o­rate the confla­gra­tion and the inscrip­tion on its base repeated the anti-Papist senti­ments. In fact, despite Robert Farryner’s insis­tence to the contrary, the cause was almost certainly acci­dental – but it was many years before the Monu­ment’s offensive alle­ga­tion was erased.

After the Catholic conspiracy theory had been written off, and doubtless influ­enced by the ‘Pudding Lane to Pye Corner’ business, moralists seized on an alter­na­tive culprit for the Great Fire: the ‘extrav­a­gant feasting’ of well-off 17th-century Londoners.

Some time in the early 18th century a wooden effigy of a chubby little boy was carved to ornament Giltspur Street’s Fortune of War tavern, with the following words inscribed across his chest, folded arms and belly: “This boy is in memory put up for the late Fire of London, occa­sioned by the sin of gluttony, 1666” – though by today’s standards he doesn’t look prodi­giously fat. When the tavern was later rebuilt the boy was installed above the door of the new premises. He wasn’t gilded until around the end of the 19th century, by which time the inscrip­tion had become illegible. Before it was golden the statue was simply known as ‘the Naked Boy’, ‘the Fat Boy’ or ‘the Glutton’.

Conve­niently located for Barts Hospital, the Fortune of War gained notoriety in the 1820s as a hangout for body snatchers – who made their living by stealing the dead from freshly dug graves and selling them to anatomists. When some of these repro­bates turned to murder as a more direct means of obtaining their wares, public outrage resulted in the passing of the Anatomy Act of 1832, which increased the legal supply of cadavers.

The tavern was demol­ished in 1910 and the City & Guilds head­quar­ters now occupies the site. The Golden Boy has been mounted in a custom-built arch high up on the build­ing’s angular Cock Lane corner. 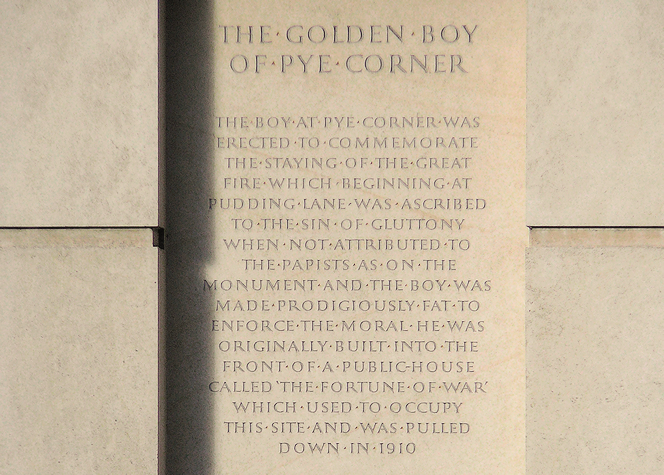