Properly known as West Smithfield, this is the home of London’s main wholesale meat market and of St Bart’s Hospital, located just west of the Barbican 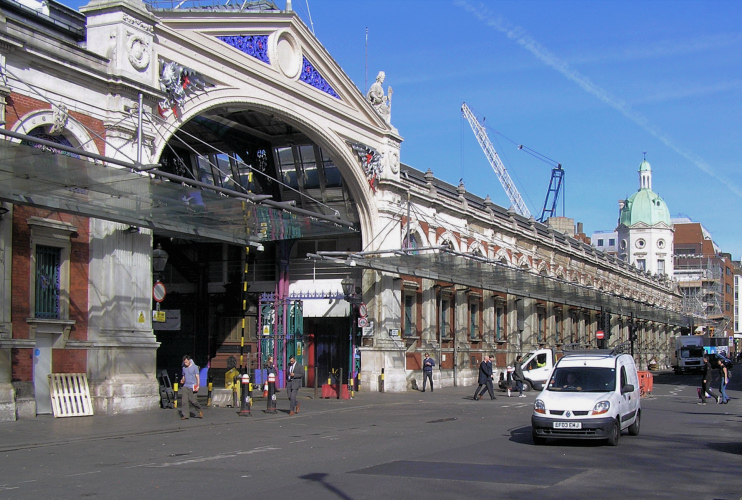 The Romans used this ‘smooth field’ as a cemetery in the third and fourth centuries and it was later the site of public execu­tions, including the burning of witches and martyrs. The priory church of St Bartholomew the Great and an adjoining hospital were estab­lished in 1123 by Rahere, who is sometimes described as a court jester but was “more of a priest than a fool” – as Rudyard Kipling put it. Both insti­tu­tions survive today, though nothing remains of the hospital’s original building and only a little of the church’s.

Bartholomew’s Fair was held annually from 1133. The event, which began on St Bartholomew’s day (24 August) and lasted for several days, was the national market for the sale of cloth. Oxen were sold here from 1305 and the Corpo­ra­tion of London gained the right to collect market tolls from 1400, although it was not until 1638 that a formal charter was granted. Cattle were driven here from as far away as the Isle of Skye in Scotland. Turkeys waddled from Norfolk wearing little cloth shoes on their feet.

The agri­cul­tural revo­lu­tion of the 18th century brought extra­or­di­nary devel­op­ments in animal fattening tech­niques. In 1795 the average carcass sold at Smith­field weighed twice what it had done in 1710.

The scale of oper­a­tions at the livestock market created an increas­ingly hazardous public nuisance but self-inter­ested parties long resisted relo­ca­tion to a more suitable site. Finally, the Smith­field Market Removal Act of 1852 moved the trade in live animals to Copen­hagen Fields. Had the law not inter­vened market forces would have, because the growth of the railways was making it increas­ingly viable to bring in farm-killed meat.

Bartholomew’s Fair was suppressed in 1855 and Smithfield’s street pattern was recon­fig­ured, focused on new central buildings for the market. These have since been refur­bished to bring them up to European Union hygiene standards – all very different from the picture of ‘filth and mire’ conjured up by Dickens in Oliver Twist.

Smith­field is the only signif­i­cant wholesale market that has not relocated outside the City, and meat is delivered by refrig­er­ated trucks that are barely able to negotiate the narrow streets. In 1994 the Court of Appeal ruled that the Corpo­ra­tion owns Smith­field whether or not it is used as a market, and thus the possi­bility remains that the butchers will be displaced so that more prof­itable use can be made of the site.

Subject to suffi­cient funds being raised, the presently disused General Market building (which is less attrac­tive than the Central Markets) and neigh­bouring struc­tures will be rede­vel­oped as the new home for the Museum of London. The museum hopes to reopen at Smith­field by 2021.

The Scottish nationalist William Wallace was executed at Smithfield in 1305, and Wat Tyler, who led the Peasants’ Revolt, was stabbed to death here by the Lord Mayor of London in 1381.

The artist William Hogarth was christened at St Bartholomew’s Church in 1697. Ben Jonson’s most famous work, Bartholomew Fair, was written about the rogues he met at Smithfield.

The poet John Betjeman had a home in Cloth Fair from 1955. He moved out in 1977, when he had finally had enough of the din of Smithfield’s juggernauts.

* The photo of Smithfield Market on this page is adapted from an original photograph, copyright Martin Kerans, at Geograph Britain and Ireland, made available under the Attribution-ShareAlike 2.0 Generic Licence. Any subsequent reuse is freely permitted under the terms of that licence.