Born into the ‘red brick gloom’ of Parlia­ment Hill Mansions in Lissenden Gardens in 1906, John Betjeman was poet laureate from 1972 until his death in 1984.

The young Betjeman went to junior school in Highgate before being sent away to provin­cial boarding schools and then ascending to Oxford Univer­sity, from which he did not graduate. He taught at Heddon Court school, Cock­fos­ters, in 1929–30, after which he became a full-time writer (notably as an archi­tec­tural critic), poet and urban conservationist.

He lived in Smithfield’s Cloth Fair from 1955 until 1977, when, having finally had enough of the din of the meat market’s early-morning jugger­nauts, he retired to Cornwall.

Betjeman wrote prose and poetry on all sorts of subjects that took his fancy, but espe­cially aspects of London – from Harrow-on-the-Hill to the Hackney Empire. He was a co-founder of the Victorian Society and greatly admired the best buildings of that era – and its railways – but his fondness for fine archi­tec­ture was more than just nostalgic. He lauded Tooting Broad­way’s Granada cinema, built in 1931, as “a Spanish-Moorish-Gothic cathedral for the people of Tooting.”

He also cherished rural Middlesex and wistfully chron­i­cled its decline into suburban monotony.

“Gaily into Ruislip Gardens
Runs the red electric train,
With a thousand Ta’s and Pardon’s
Daintily alights Elaine.
Hurries down the concrete station
With a frown of concentration,
Out into the outskirts’ edges
Where a few surviving hedges
Keep alive our lost Elysium – rural Middlesex again.”

Betjeman campaigned again and again to save threat­ened Victorian landmarks, espe­cially during that philis­tine decade that was the 1960s. Lovely little Wilton’s music hall can thank him for helping secure its continued – if still precar­ious – existence. At the other end of the scale of magnitude, palatial St Pancras station could have been lost had it not been for his efforts.

Martin Jennings’s larger-than-lifesize bronze statue of Betjeman was commis­sioned by Futurecity on behalf of London and Conti­nental Railways for the newly restored St Pancras. It was jointly unveiled on 12 November 2007 by Betje­man’s daughter Candida Lycett-Green and poet laureate Andrew Motion. Selected Betjeman verses were inscribed on Cumbrian slate discs and set into the platform around the sculpture.

John Betjeman was a national treasure – erudite, ebullient and endearing. His evocative statue attracts far more admirers and photog­ra­phers than Paul Day’s much larger The Meeting Place, just inside the station’s front entrance, which Hidden London likes more for its retro­fitted frieze (detail shown right) than its oversized focal figures. 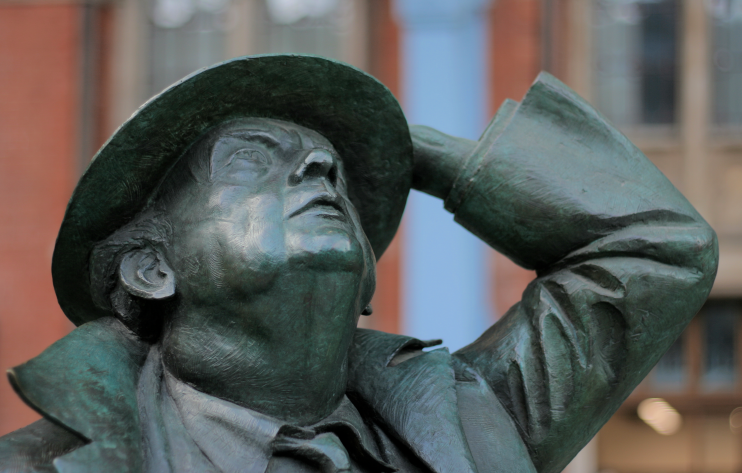