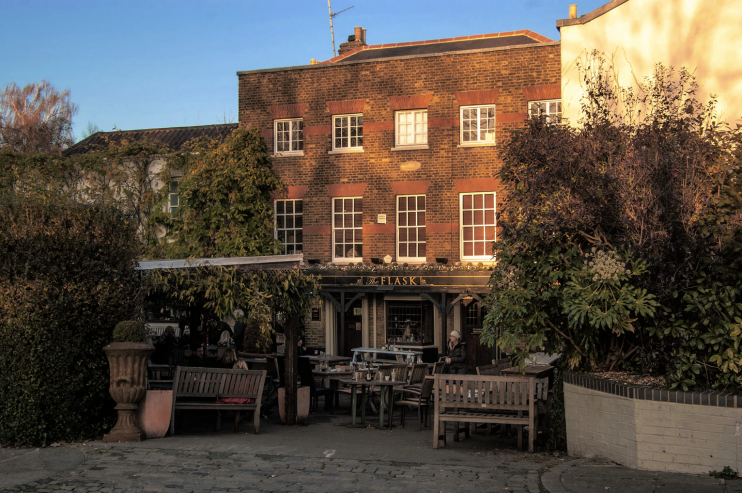 Highgate took root around a village green peppered with ponds and elm trees, at the top of a 426-foot hill on the edge of the Bishop of London’s estate. It was the bishop who erected a tollgate here sometime before 1354, when Highgate’s name was first recorded. Later in the same century Dick Whit­tington is said to have sat upon a milestone on Highgate Hill on his way back to the family home in Glouces­ter­shire. Inspired by the distant sound of Bow Bells, he turned again to find fame and fortune in London. A replica stone marks the alleged spot, surmounted by a 1964 statue of Whittington’s cat.

From the late 16th century a ribbon of houses began to form along Highgate Hill. The settle­ment was split down the middle between the parishes of St Pancras and Hornsey, as it now is between the boroughs of Camden and Haringey. The much-altered Laud­erdale House was a home of Charles II’s mistress Nell Gwynne. Shown in the photo­graph above, taken in December 2016, the Flask public house dates from 1663.

From the late 17th century to the end of the 18th century Highgate filled with smart houses for City folk. Many of the prop­er­ties survive, and so does the demo­graphic profile.

Highgate did not gain its own parish church until 1832, when St Michael’s was built in place of a chapel of ease.

Highgate Cemetery opened in 1839 and is now divided into the western (original) cemetery and the eastern (1854), separated by Swains Lane. With its memorials, mausolea and catacombs, the cemetery is much loved by those of a gothic incli­na­tion. Nowadays you have to pay to visit.

Sir Sydney Waterlow, like Dick Whit­tington a Lord Mayor of London, is commem­o­rated with a statue in the park that he donated in 1889. Waterlow Park is located north-east of Highgate Cemetery.

Shown in the photo­graph below, Witan­hurst, on Highgate West Hill, is said to be the second largest private residence in London, after Buck­ingham Palace. The house’s archi­tec­tural styling has been variously described as William and Mary, Queen Anne or Georgian. It was built in 1913–20 for the soap magnate Sir Arthur Crosfield and the present owner is reported to be the Russian oligarch Andrey Guryev. 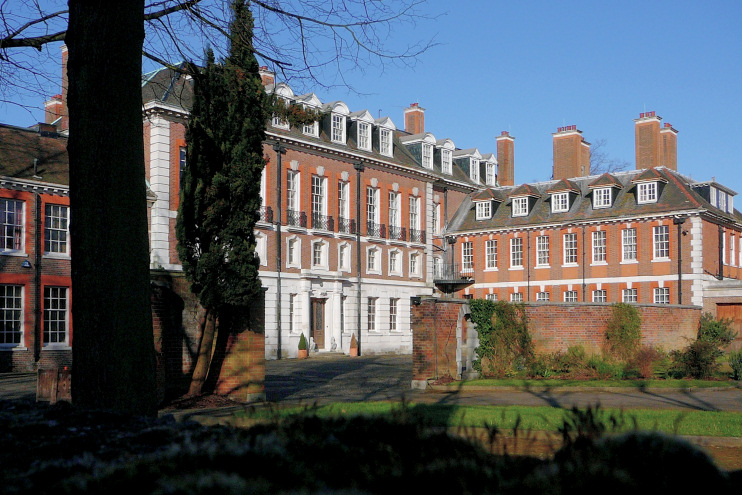 Highgate’s most important 20th-century buildings are Highpoint One and Two (located at the centre of the map below), designed in the 1930s by Berthold Lubetkin for Sigmund Gestetner, the copier king. Gestetner initially intended the modernist project to provide housing for some of his Tottenham Hale workers but he changed his mind and sold them privately. Lubetkin himself took a penthouse apartment in Highpoint Two.

Highgate station opened in 1941, taking the name earlier used by what is now Archway station. This and other improve­ments in transport links contributed to the devel­op­ment of a new district to the north and east of the village that traded on the Highgate name.

To have been ‘sworn in at Highgate’ was late 18th-century slang for being sharp or clever. The term derived from a silly ceremony practised at Highgate pubs.

* The picture of the The Flask public house at the top of this article is adapted from an original photograph, copyright Julian Osley, at Geograph Britain and Ireland, made available under the Attribution-ShareAlike 2.0 Generic Licence. Any subsequent reuse is freely permitted under the terms of that licence. The other photographs are copyright Hidden London.