A collection of commercial and council estates on the east side of Tottenham, presently undergoing radical redevelopment 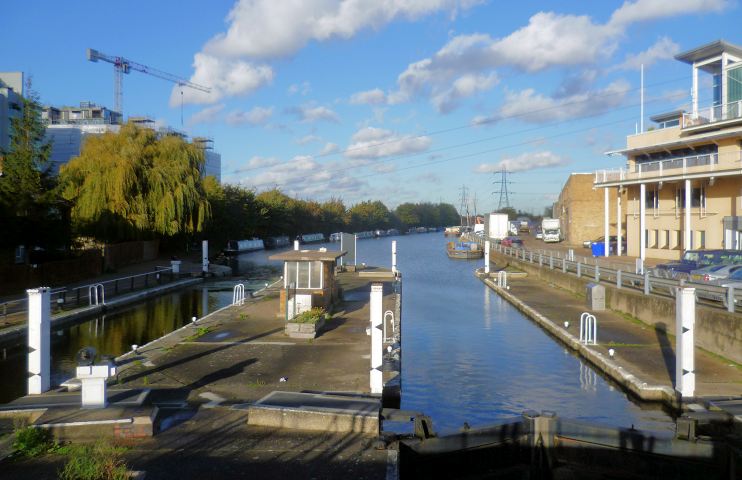 There is evidence of pre-Norman economic activity beside the River Lea and residents of ‘the Hale’ – meaning ‘the nook’ – were recorded from the late 13th century, although the first mention of Tottenham Hale did not come until 1754. By this time the settle­ment was Tottenham’s largest satellite, with several dozen dwellings and – on its eastern edge – the Ferry Boat inn. Following the creation of the Lee Navi­ga­tion a lock was constructed at Tottenham Hale in 1776.

The village had more than 600 inhab­i­tants in 1840, when the Northern and Eastern Railway arrived and Tottenham (now Tottenham Hale) station was built. The Ferry Boat (which had by then been enlarged) capi­talised on the local­i­ty’s new-found acces­si­bility by opening a pleasure garden and fishery, which became a popular desti­na­tion for day trips.

Tottenham Lock was resited at its present location (shown in the photo­graph above*) in 1845. From the early 1860s suburban devel­op­ment began to connect Tottenham Hale with what is now its parent district and its separate existence had been wholly lost by the 1890s. Over the same period, the East London Water­works Company’s reser­voirs submerged the meadows that had lain to the east and placed a topo­graphic barrier between the Hale and Walthamstow. 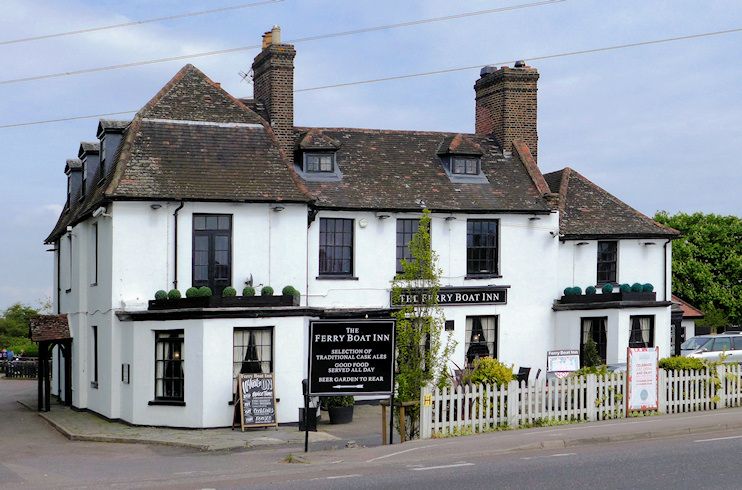 Inci­den­tally, unlike the rest of Tottenham Hale, the Ferry Boat inn stands on the left (east) bank of the River Lea, histor­i­cally the boundary between Middlesex and Essex. Writers always placed the Ferry Boat “in the parish of Waltham­stow” until a few began to waver following the Post Office’s rule-​​bending inclusion of the pub within Tottenham’s N17 postal district. But that was presum­ably just a delivery-​​related conve­nience – and whatever its postcode the Ferry Boat inn is still located in Walthamstow’s parent borough Waltham Forest, not Tottenham’s Haringey. And it lies within the parish of St Andrew, Walthamstow.

Factories were built during the first half of the 20th century, mostly between the railway line and the river, and Tottenham Hale became one of the borough’s primary indus­trial zones. The best-known employer was the Gestetner factory on Broad Lane, which employed 6,000 staff at the peak of its produc­tion of stencil-dupli­cating equipment.

From the late 1950s much of Tottenham Hale was rede­vel­oped with municipal housing, which was generally of a higher archi­tec­tural standard than on other estates in the area, for example at Northum­ber­land Park. The Greater London Council’s Ferry Lane estate of the late 1970s was accom­pa­nied by the opening of a new primary school. Disused factories were subse­quently replaced by shed-style ware­housing and the Ferry Island and Tottenham Hale retail parks.

Although a rela­tively little-known desti­na­tion, Tottenham Hale is one of outer London’s busier stations because it is an inter­change for the line to Stansted airport. The station was upgraded at the turn of the millen­nium but TfL now proposes extensive addi­tional improve­ments, to be completed by winter 2019. 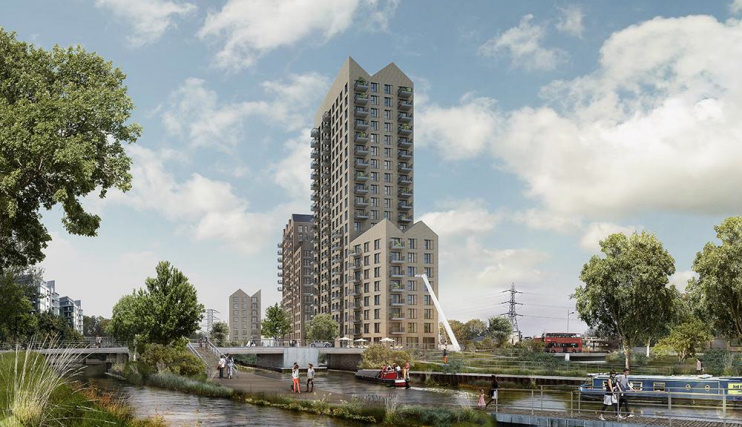 Much recon­struc­tion has taken place in recent years, most visibly at Hale Village, with over 1,100 mixed-tenure resi­den­tial prop­er­ties and 1,200 rooms for students, plus amenities and busi­nesses employing 400 people. The next major scheme will be Hale Wharf, shown in the CGI above, where around 500 new homes will be squeezed into a slender waterside site.

The ward of Tottenham Hale has an ethni­cally diverse popu­la­tion, as the 2011 census data below shows: