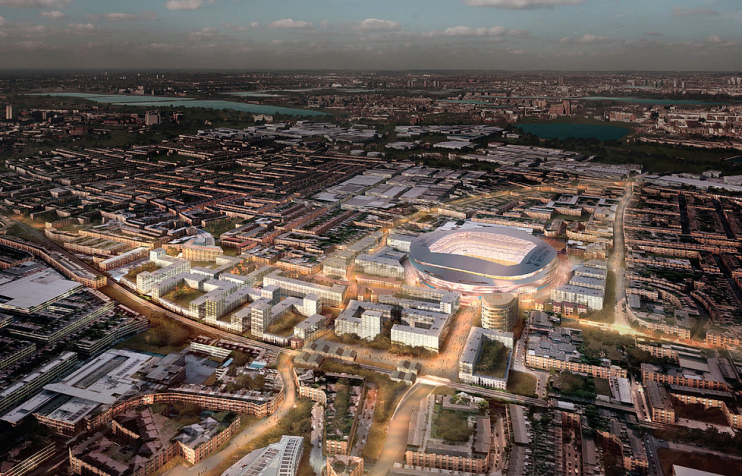 ‘Toteham’ (the farmstead of a man called Totta) was first recorded in Domesday Book, as was a weir at present-day Tottenham Hale.

From the twelfth century Tottenham’s acces­si­bility to London attracted wealthy merchants and religious insti­tu­tions to its wooded slopes, although the main village consisted only of a cluster of dwellings at Tottenham Green. Six inns were recorded on the High Road in the mid-15th century and Tottenham manor house (now Bruce Castle) lay almost a mile to the north of the green.

Henry VIII made a payment to the hermit of Tottenham when he visited the house in 1517. Over the course of the next two centuries mansions, private schools, groups of almshouses and other char­i­table insti­tu­tions were built near the High Road, while extensive woodland survived to the west and the marshy meadows lay undis­turbed to the east.

Only in the late 18th century did devel­op­ment begin to branch away from the High Road along old tracks like White Hart Lane and new roads like Bruce Grove.

Tottenham remained suburban rather than urban until the coming of the railways to the east side of the parish in the 1840s and the west side in the 1850s. Wood Green, formerly an outlying hamlet, grew espe­cially rapidly and had estab­lished itself as a separate middle-class district by the early 1870s. At this time a railway at last cut through central Tottenham, west of the High Road. Spec­u­la­tive devel­opers had already built numerous houses in antic­i­pa­tion of this event and they stepped up their efforts over the following two decades, until Tottenham had spread to meet its neigh­bours in all directions.

In the early 20th century places of enter­tain­ment were built on the High Road, Tottenham Hotspur football club won early trophies and industry came to the marshes. Shown in the photo below, an engine house survives on Tottenham Marshes, with a recently opened café. The last pockets of farmland disap­peared in the 1920s, when municipal house­building began in earnest. 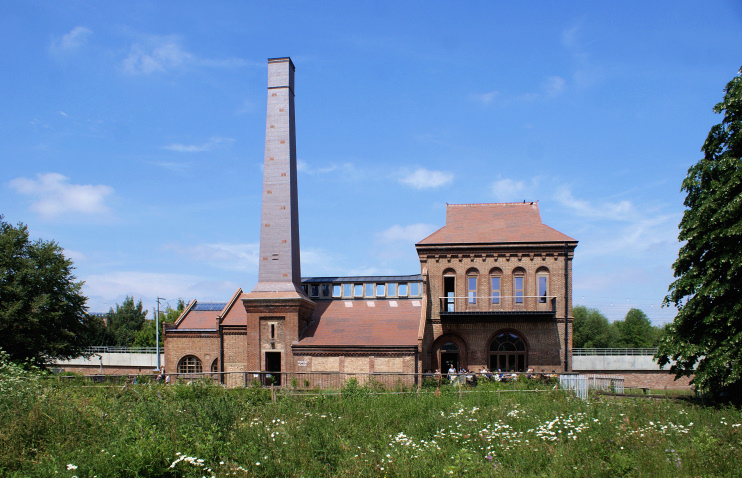 After the Second World War council flats dominated the construc­tion programme, with massive projects in the 1960s – notably at Northum­ber­land Park and Broad­water Farm – and smaller, low-rise estates in the 1970s, for example at Seven Sisters. This was a period of signif­i­cant change in Tottenham’s resi­den­tial profile, with the arrival of immi­grants first from the Caribbean, espe­cially in South Tottenham, and later from Turkey and Africa.

On 4 August 2011 police shot and killed Mark Duggan, a Broad­water Farm resident who was subse­quently alleged – but not proven – to have been involved in drug dealing and gang-related criminal activity. Two days after Duggan’s death, a protest march from Broad­water Farm to Tottenham police station escalated into a night of rioting and arson across much of the area, which was then followed by similar events in other parts of London and beyond. Several buildings in Tottenham were damaged beyond repair and had to be demolished.

A section of the northern part of Tottenham High Road and its vicinity has recently been trans­formed by the Northum­ber­land Devel­op­ment Project: the construc­tion of a new stadium for Tottenham Hotspur FC. Regen­er­a­tion of the surrounding area will continue for some while yet, and may ulti­mately result in the cityscape shown in the aerial CGI at the top of this article.

Tottenham cake   A tray-baked sponge cake with pink icing that is ideally coloured and flavoured with the juice of mulber­ries picked from a tree in Bruce Castle Park. Black­cur­rant or cherry juice may be used if mulberry juice is not available. Tottenham cake was created in the late 19th century by local baker Henry Chalkley and sold at one penny a square. Bulk quan­ti­ties were baked and given to children to celebrate Spurs’ victory in the 1901 FA Cup final replay, when they beat Sheffield United 3–1 to become the only non-league club in history to win the tour­na­ment. Tottenham cake is still served at the White Hart Lane ground on special occasions.

Tottenham Hotspur FC   An eminent profes­sional football club, formed (orig­i­nally as Hotspur FC) from an older cricket club in 1882. Its home ground is White Hart Lane. Most of the club’s founders were old boys of St John’s Pres­by­terian School and Tottenham Grammar School. The ‘Hotspur’ name was inspired by the area’s connec­tion with the dukes of Northum­ber­land: in the 18th century a Tottenham man, Hugh Smithson, married into the Percy family, even­tu­ally becoming 1st Duke; and Henry Percy (1364–1403), son of the 1st Earl of Northum­ber­land (who features in Shakespeare’s Henry IV, Part I, acquired through his impul­sive­ness the nickname ‘Hotspur’. The club is noted for its loyal fan base among north London’s Jewish community.

Tottenham Outrage   On 23 January 1909 two Latvian anar­chists stole wages from a factory on Tottenham High Road. They were chased by police and local tradesmen, and responded by firing pistols wildly in their pursuers’ direction, killing PC William Frederick Tyler and a 10-year-old delivery boy. The robbers hijacked a tram, a horse-drawn milk cart and a greengrocer’s van in their attempt to escape but they were cornered in Hale End, where they shot them­selves dead rather than surrender. A commem­o­ra­tive plaque was unveiled at Tottenham police station in 2009, to mark the centenary of the outrage.

Tottenham pudding   A feed for pigs or poultry, consisting of ster­ilised kitchen waste. It was developed in Tottenham during the Second World War.

Tottenham shall turn French   Most lexi­cog­ra­phers assert that this was an ironic old saying of the ‘pigs might fly’ variety, referring to something that would never happen. However, Francis Grose, in his Provin­cial Glossary (1787), renders the proverb as ‘Tottenham is turned French’, and explains it thus: “After the beginning of the reign of Henry VIII a vast number of French mechanics came over to England, filling not only the outskirts of the town, but also the neigh­bouring villages … This proverb is used in ridicule of persons affecting foreign fashions and manners, in pref­er­ence to those of their own country.”

Tottenham sound   Suppos­edly, London’s answer to Liverpool’s Mersey­beat in the early to mid-1960s. In reality, the ‘Tottenham sound’ emanated from only one signif­i­cant act, the Dave Clark Five, who played their first gig at a Seven Sisters youth club in January 1962 and took their name from their Tottenham-born drummer. Never­the­less, the term achieved media exposure on both sides of the Atlantic.

Tottenham Three   The collec­tive name given to Winston Silcott, Engin Raghip and Mark Braith­waite, who were sentenced to life impris­on­ment in 1987 for ‘having common cause’ with the mob who murdered PC Keith Blakelock during the October 1985 Broad­water Farm riot. Their convic­tions were quashed in 1991 after tests revealed that Silcott’s confes­sion had been tampered with. Braith­waite and Raghip were released, though Silcott remained in jail until 2003 as he was serving a sentence for another murder as well.

The Tour­na­ment of Tottenham   A mock-heroic metrical romance written around 1425. It was probably intended as a satire on the dangers and costs of the jousting events that were popular at the time. A number of clowns are intro­duced, prac­tising warlike games and making vows like knights of high degree. They tilt on carthorses, fight with ploughshares and flails, and wear wooden bowls and saucepan lids for armour. The poem was repub­lished in Percy’s Reliques (1765)

[The Tottenham cake article is not in Brewer’s.]

* The picture of the engine house in Tottenham Marshes is adapted from an original photograph, copyright Robert Lamb, made available under the Attribution-ShareAlike 2.0 Generic Licence. Any subsequent reuse is freely permitted under the terms of that licence.