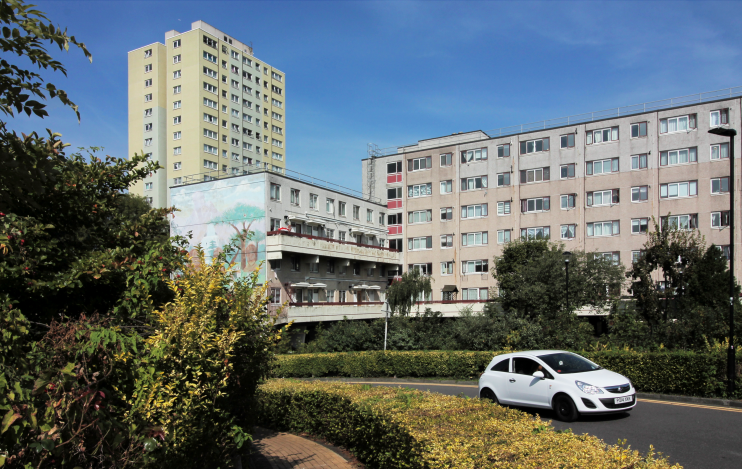 The original Broad­water Farm covered 119 acres of the huge Downhills estate, which Tottenham council bought and began to develop in 1902.

Built between 1967 and 1973, the present Broad­water Farm estate consists primarily of twelve concrete-panelled blocks, most of which have four to six storeys, orig­i­nally with a deck access system of pedes­tri­anised walkways.

By 1976 the design faults, lack of amenities and fear of crime on the estate resulted in more than half of those on the housing waiting list refusing accom­mo­da­tion here and a long queue of transfer requests from existing tenants.

In October 1985, during a police search following the arrest of her son, Cynthia Jarrett collapsed and died at her home near the Broad­water Farm estate. In the ensuing Broad­water Farm riot PC Keith Blakelock was hacked to death. Three men were convicted of the killing but were all even­tu­ally acquitted on appeal. Almost 30 years after the riot another man stood trial at the Old Bailey and was cleared of killing PC Blakelock.

During the ten years from 1993 compre­hen­sive improve­ments were carried out to make Broad­water Farm a more humane place in which to to live.

Disused shops were replaced by smart new homes and overhead walkways were disman­tled. The estate-based manage­ment programme designed to address the social problems in Broad­water Farm has been rela­tively successful, partly through the use of ‘super-care­takers’ and also because the neigh­bour­hood is so well-defined; other projects have attempted to encompass ‘commu­ni­ties’ with which residents do not identify.

However, writing of the scheme in the New Statesman, Paul Barker pessimisti­cally commented that “you need only go there to see that it is a high-wire act. The smallest slip, and things will be back at the bottom.”

On 4th August 2011 Broad­water Farm resident Mark Duggan was shot dead by police in nearby Tottenham Hale. Two days later a protest march from Broad­water Farm into the centre of Tottenham escalated into the most serious rioting seen in London for many years, followed by several nights of disorder, arson and looting all across the capital – and beyond.

In June 2018 Haringey council revealed that 11 blocks on the estate had failed struc­tural tests and two of these – Tangmere House and Northholt – were at risk of cata­strophic collapse. The council estimated it would cost around £28m to strengthen the two buildings so it preferred to demolish them. Remedial safety measures would suffice in the other nine blocks.