‘A metropolitan blend of open spaces, excellent facilities and easy commuting,’ according to a property developer’s blurb, but known to most as the station with the funny name at the northern end of the Piccadilly line 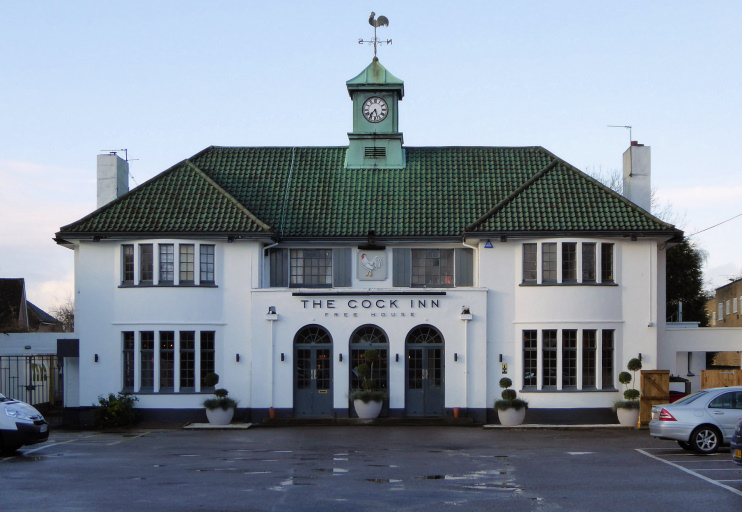 From at least the early 16th century this was an estate granted to the cock (chief) forester of Enfield Chase. Cock­fos­ters developed as a hamlet long before most other parts of Enfield Chase. It lay on the edge of woodland, halfway along the road from Southgate to Potters Bar. A Lincoln’s Inn barrister owned a house called Cock­fos­ters in 1613 and a small group of cottages and houses had formed by 1754.

Following the enclosure of Enfield Chase in 1777, society doctor Richard Jebb leased three adjoining plots of former Chase land and built a house that he named Trent Place, after Trento in the Tyrol, where he had cured the Duke of Gloucester of a serious illness. The house was progres­sively enlarged by succes­sive owners and came to be known as Trent Park. Cock­fos­ters found itself standing near the estate’s main gate and its growth from the end of the 18th century (when the Cock Inn was estab­lished) was in many ways as a service village for Trent Park.

Christ Church (shown in the photo below) and the nearby Trent Church of England school, (orig­i­nally for girls and infants, now Trent CE primary school) were built at the expense of Robert Cooper Lee Bevan of Trent Park in the late 1830s. 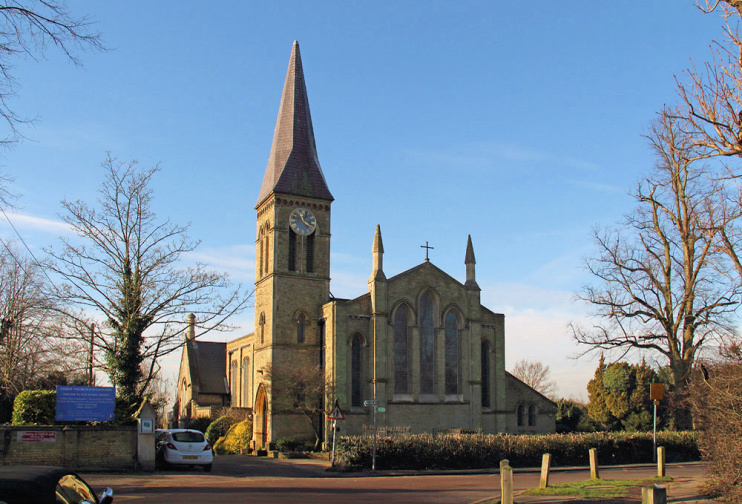 Little then changed in the village for almost a hundred years except that a subscrip­tion-funded boys’ school opened in 1859 and two houses, Ludgrove Hall and Heddon Court, later became boys’ prepara­tory schools.

In 1908 the Trent Park estate was acquired by Sir Edward Sassoon and four years later it was inherited by his son Sir Philip Sassoon, who is custom­arily char­ac­terised as a ‘bon vivant’ and ‘socialite’. Between 1926 and 1931 the mansion (which was by then a mostly Victorian creation) was revamped to give it its present red-brick, Georgian appearance.

After the Piccadilly line arrived in 1933, Heddon Court and Westpole Farm were sold for building and new streets were laid out. A shopping parade was built near the station. Shown in the photo at the top, the rebuilt Cock Inn is “a char­ac­ter­istic 1930s roadhouse by JCF James for Benskins,” according to Pevsner. By 1939 Cock­fos­ters was fully built up south of the station and had spread west to meet New Barnet.

Philip Sassoon died in 1939 and the house was requi­si­tioned for govern­ment use during the Second World War, latterly as a special prisoner-of-war camp for high-ranking German and Italian officers. It was wired with bugging devices to help extract crucial infor­ma­tion from them without their knowledge.

The appear­ance of Cock­fos­ters was signif­i­cantly influ­enced by the war, not by bombing but because the conflict brought house­building to a stand­still. When the process resumed after­wards it was constrained by the new green-belt regu­la­tions, so suburban expansion came to an abrupt halt north of the station. To the west, Barnet council built an estate of 419 homes – and commer­cial builders filled most of the remaining gaps during the 1950s. More recently some compact blocks of balconied apart­ments have been squeezed in.

Trent Park was until 2012 a Middlesex Univer­sity campus. After the univer­si­ty’s departure, Enfield council expressed a pref­er­ence for the site to remain in educa­tional use – with the retention and enhance­ment of the historic buildings and land­scaped parkland.

In 2013 the campus was bought for around £30 million by a privately owned Malaysian univer­sity. This venture did not work out well and two years later the house and 56 acres of grounds were sold to the Berkeley Group, which has done what’s usually done nowadays with sites like this: restored the mansion and added a little village of (reason­ably tasteful) new-build houses and low-rise apartment blocks in the grounds. A couple of historic outbuild­ings have been retained and converted to flats. While the mansion’s upper floors have been divided into apart­ments, it is hoped that most of the ground floor and basement will be converted into a museum and educa­tional hub “telling the hidden stories of Trent Park.”

As well as the mansion, Trent Park has nature trails, bike paths, lakes, woodland and glades, a golf course, eques­trian centre and wildlife sanctuary. Car parking spaces are limited so on a sunny day it might be a safer bet to come by tube.

The slideshow below features a devel­op­er’s CGI of the restored mansion and photographs of Trent Park taken in August 2022, including views of the George Grey, Earl of Harold, memorial obelisk and the pineapple atop the Jemima (Emma) Crewe memorial column. Both memorials (and the Duke’s Pyramid, near the car park) were installed here in 1934 by Sir Phillip Sassoon, who obtained them from Wrest Park in Bedfordshire. 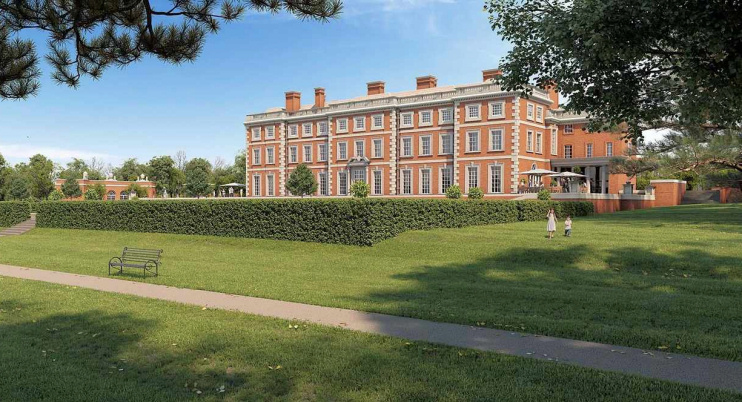 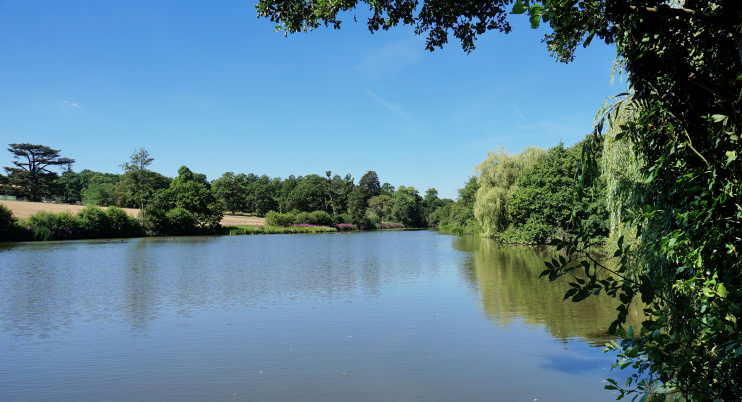 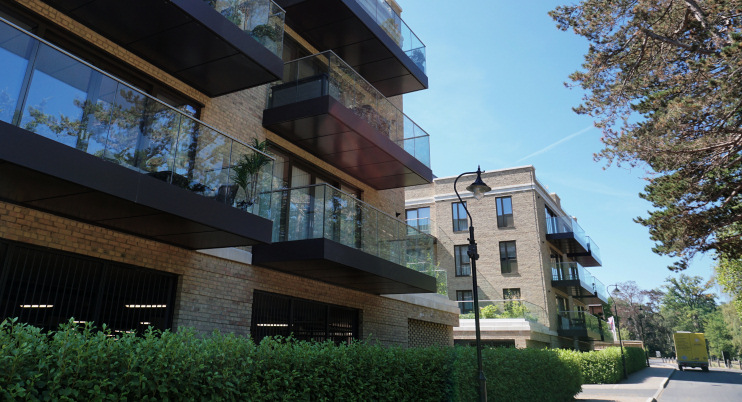 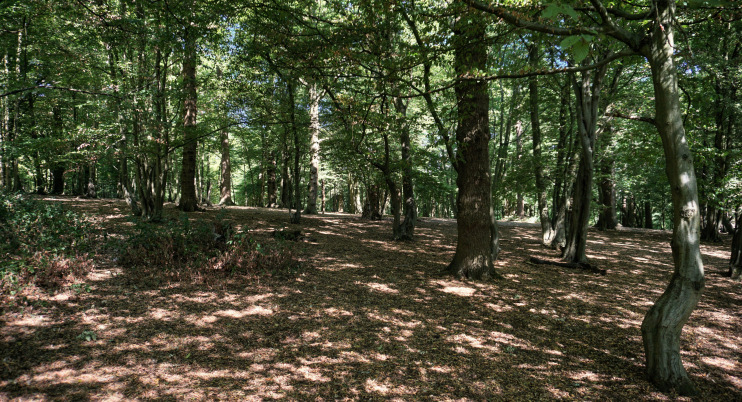 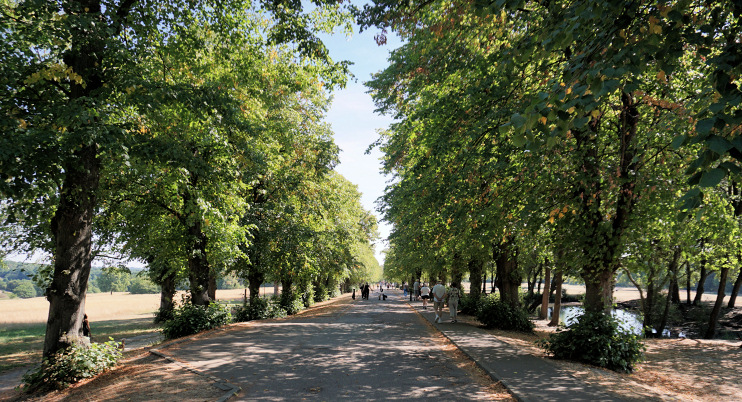 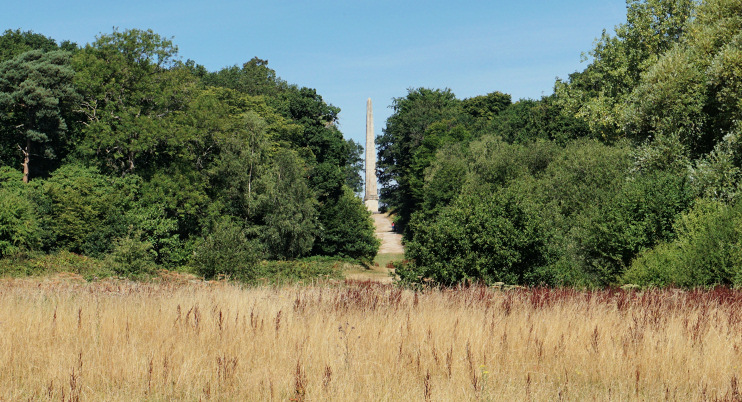 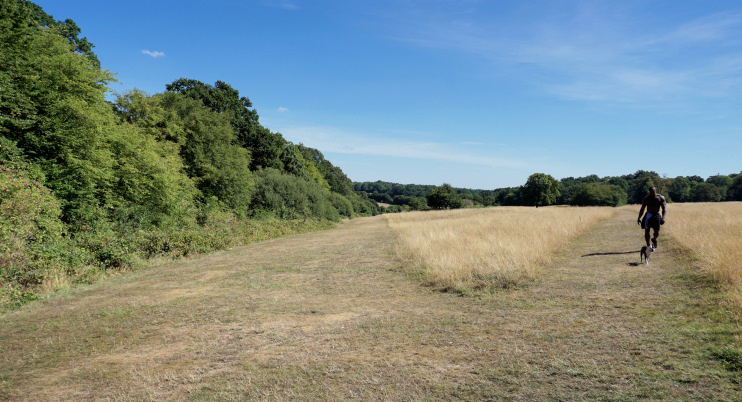 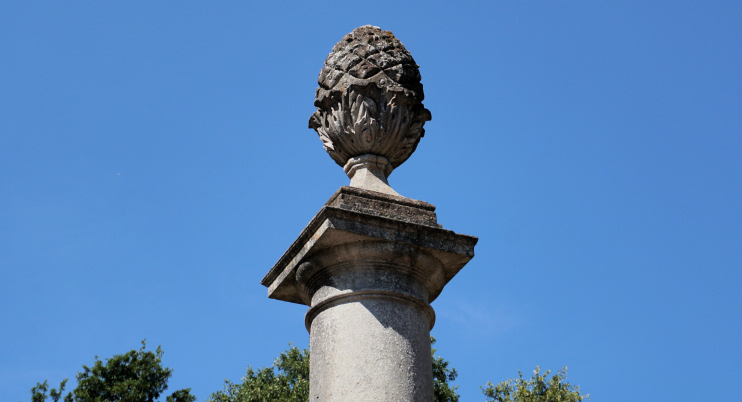 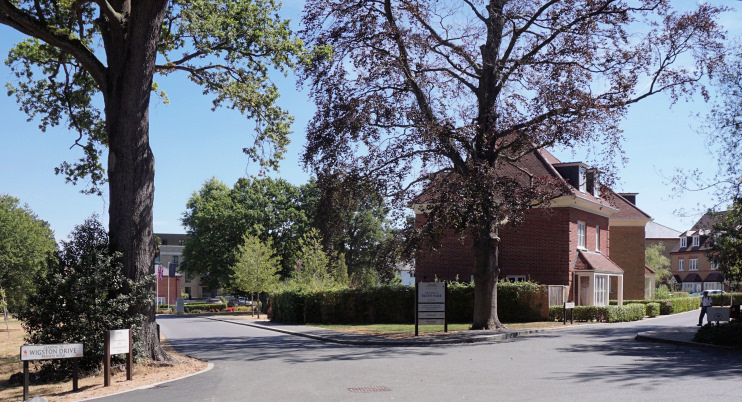 Osbert Sitwell, the poet and short story writer, was educated at Ludgrove school, which he loathed. The school moved to Berkshire in 1937.

John Betjeman, poet laureate from 1972 until his death in 1984, taught at Heddon Court school from April 1929 to July 1930. He later recalled this period in his poem ‘Cricket Master’.

* The picture of the Cock Inn, Cockfosters at the top of this page is modified from an original photograph, copyright Andrew Bowden, at Flickr, and the picture of Christ Church, Cockfosters, is minimally modified from an original photograph, copyright John Salmon, at Geograph Britain and Ireland, both made available under the Attribution-ShareAlike 2.0 Generic Licence. Any subsequent reuse is freely permitted under the terms of that licence.