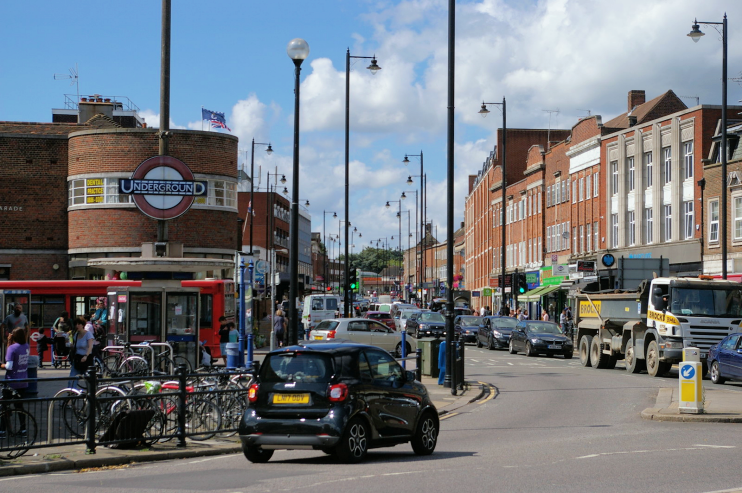 Southgate – the hamlet that grew up by the southern entrance to Enfield Chase – was first mentioned in 1370. The gate stood near the present site of the tube station. Another settle­ment grew up along South Street, in the vicinity of Southgate Green. Much of the surrounding area was woodland at this time, providing a resource for the poor – and for the king, who owned the chase.

Here on the edge of the chase several estates came into existence from the late Middle Ages, often with large houses at their hearts, and after the chase was enclosed in 1777 a similar process took place when this land was divided up among already wealthy knights and gentlemen.

Southgate thus became known for its elegant mansions and the wealthy London merchants who owned them. This state of affairs persisted well into the 19th century, because of the absence of main roads, the hilly terrain that kept away the early railway builders, and the disin­cli­na­tion of several of the larger estates’ owners to sell their land. A few new streets were laid out after 1853 but spec­u­la­tive builders found few takers for the large houses they had started to erect and they soon desisted.

By the outbreak of the First World War Southgate was still essen­tially rural. After the war improve­ments in bus services brought some ripples of interest from potential commuters but it was the arrival of the Piccadilly Line in 1933 that really turned the tide. In the space of six years the area was almost entirely built up with houses and shopping parades, except for chunks of parkland that the enlight­ened council had acquired earlier. The few remaining gaps were rapidly plugged in the 1950s. Since then some larger houses have been replaced by flats.

A rela­tively high propor­tion of prop­er­ties in Southgate are privately rented. South­gate’s most signif­i­cant minority groups are of Indian, Greek (espe­cially Greek Cypriot), black African and Irish origin, in that order.

From the 15th century Grovelands was one of Southgate’s grandest private estates. Its mansion was built in 1797 by John Nash for a Tottenham brewer and brandy merchant, with grounds landscaped by Humphry Repton. The estate ultimately became part of the Walker family’s huge Southgate landholding, which also included Arnos Grove.

Southgate council acquired part of Groveland’s grounds as a public park just before the First World War and the rest of the land was sold for building. The mansion became a military hospital and since 1985 has been a private clinic, now called the Priory Hospital North London. The former Chilean dictator Augusto Pinochet controversially convalesced here in 1998.

* The picture entitled Looking up Chase Side from Southgate underground station at the top of this page is modified from an original photograph, copyright Christopher Hilton, at Geograph Britain and Ireland, made available under the Attribution-ShareAlike 2.0 Generic Licence. Any subsequent reuse is freely permitted under the terms of that licence.