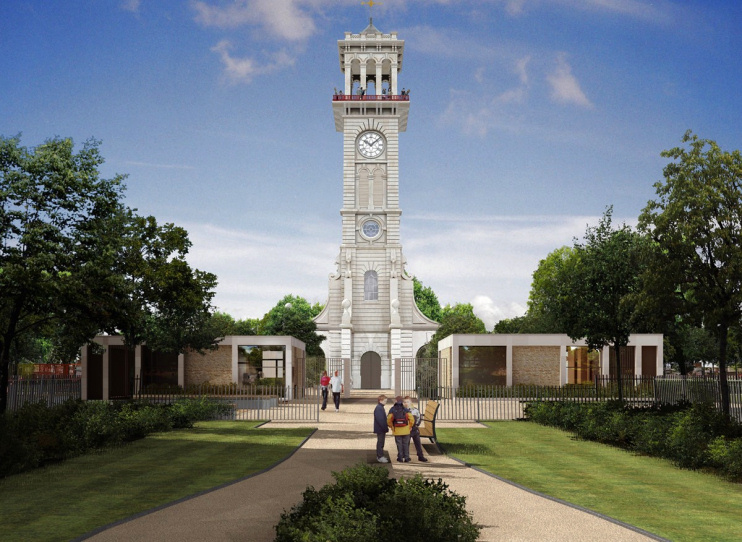 The local­i­ty’s name derives from Copen­hagen House, a 17th-century residence of the Danish ambassador.

In the late 18th century Copen­hagen Fields became a popular venue for radical demon­stra­tions. In 1795 two such protests were attended by crowds of over 100,000, and one was followed by rioting in central London.

On 21 April 1834 thousands marched from Copen­hagen Fields in support of the Tolpuddle Martyrs, who had been sentenced to trans­porta­tion to Australia for forming a trade union.

Copen­hagen House was demol­ished in 1852, when the market for live animals trans­ferred here from Smith­field. This was not a great success and was replaced for the first half of the 20th-century by the Cale­donian market, at which second-hand goods were sold.

Much of the site is now occupied by council-built housing, and Barnard Park on Copen­hagen Street and Cale­donian Park on Market Road are the area’s largest remaining open spaces.

The once-central market clock tower survives in what is now a corner of Cale­donian Park. Its base was orig­i­nally surrounded by the market’s banking and telegraph offices but only the tower’s buttresses now remain. The clock tower is located near the top of the map below.

In December 2016 the Heritage Lottery Fund confirmed a grant award of nearly £2m, which has enabled the restora­tion of the clock tower, the creation of a visitor centre and general improve­ments to Cale­donian Park. Since June 2019 the clock tower has opened to the public on a regular basis, giving free access for people to climb it and enjoy the panoramic views across London. However, some local residents have branded the scheme a ‘white elephant’.

‘Copenhagen Fields’ is the name of a magnificent 2mm-to-the-foot scale layout by the Model Railway Club. The model is set in the 1920–1930 period, in the area near the MRC headquarters in Calshot Street, and includes Copenhagen Fields and the approaches to King’s Cross, as well as the cattle market, Caledonian Road and its station, with working underground line.