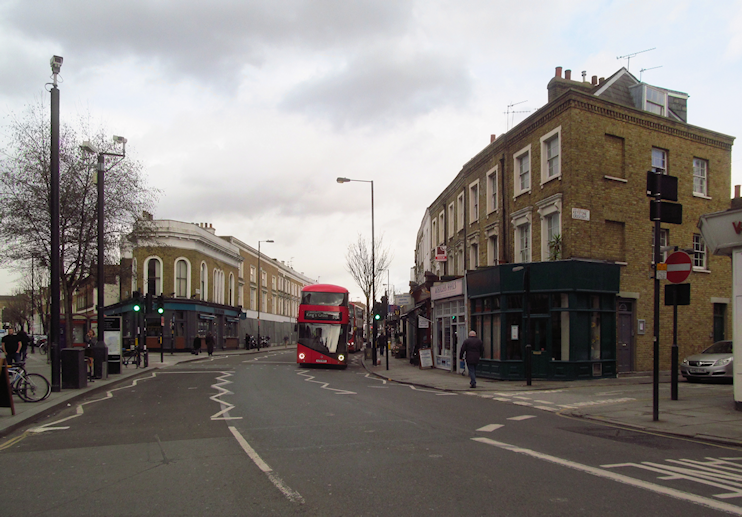 In 1826 a company was formed to build a road from King’s Cross to the Holloway Road. Orig­i­nally named Chalk Road, it ran through the open Copen­hagen Fields for most of its length. In 1861 it was renamed Cale­donian Road, after the Royal Cale­donian Asylum, founded in 1815, which had moved to Copen­hagen Fields in 1827. The asylum cared for “the children of soldiers, sailors and mariners, natives of Scotland, who have died or been disabled in the service of their country; and the children of indigent Scotch parents residing in London, not entitled to parochial relief.” Like the Reedham Asylum near Purley, the building has gone but its purpose survives in the form of a char­i­table trust.

Terraced houses were built for the middle classes in the 1850s but these soon slid down­market, often with more than one family occupying each property.

Pentonville Prison was built on land to the south of the asylum in 1842. The Great Northern Hospital stood on the Cale­donian Road until 1884. In 1892 the first public baths in Islington, with first- and second-class facil­i­ties, were built on the hospital site. The baths were demol­ished and rebuilt in 1980 and are univer­sally known as the Cally Pool.

Most decades of the 20th century saw further devel­op­ments of some kind, including the construc­tion of post-war council flats, and more housing in the 1980s, mainly at the northern end of the road. The area north-east of Cale­donian Road station is the site of a massive waste recycling centre, decanted here as part of Arsenal Football Club’s relo­ca­tion from Highbury to the Emirates Stadium.

Cale­donian Road is home to Housmans Bookshop and to numerous alter­na­tive charities and community organ­i­sa­tions, related to issues as diverse as gay rights and coun­selling, pacifism, Tibetan Buddhism, and support for prisoners’ families. There’s also a number of home improve­ment shops, special­ising in ironwork, glass, paint and second-hand furniture. 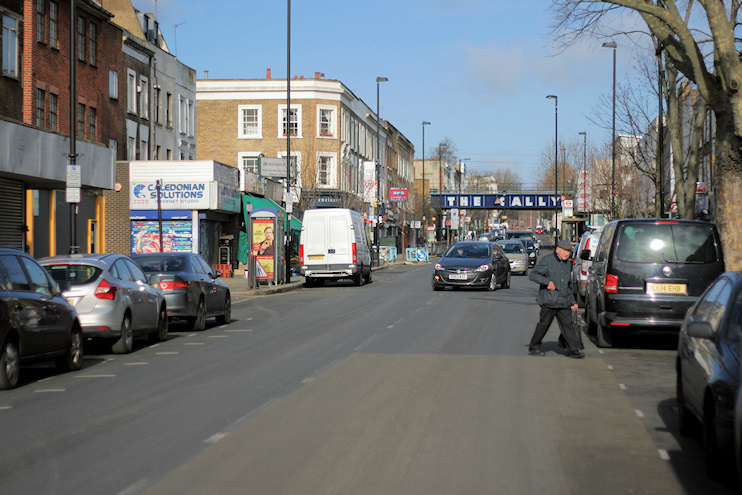 The relative afford­ability of the road and its hinter­land has attracted various groups of incomers in recent times, including young graduates and others who may not stay long. Never­the­less, the Cally remains a compar­a­tive rarity in today’s London: primarily a close-knit working-class community.

More than 70 per cent of the Cale­donian ward’s residents live in rented acco­mo­da­tion, mostly council flats.

The road’s distinc­tive character was the subject of a BBC Two docu­men­tary in 2012, in the Secret History of Our Streets series.

In 2013 Network Rail worked with the local community to repaint the bridge across the Cale­donian Road with the words ‘The Cally’. Like many other railway bridges crossing British main roads, it had previ­ously carried an adver­tise­ment for Ferodo brake pads.

The London Canal Museum, on New Wharf Road, was built as a cold store in 1863 to preserve ice imported from Norway to make ice cream.

* The picture of Caledonian Road at the top of this page is adapted from an original photograph, copyright David Holt, formerly at Flickr, where it was made available under the Attribution-ShareAlike 2.0 Generic Licence. Any subsequent reuse is freely permitted under the terms of that licence.