Famed as the former home of Arsenal football club, Highbury is an elongated settlement in north Islington, between Canonbury and Finsbury Park 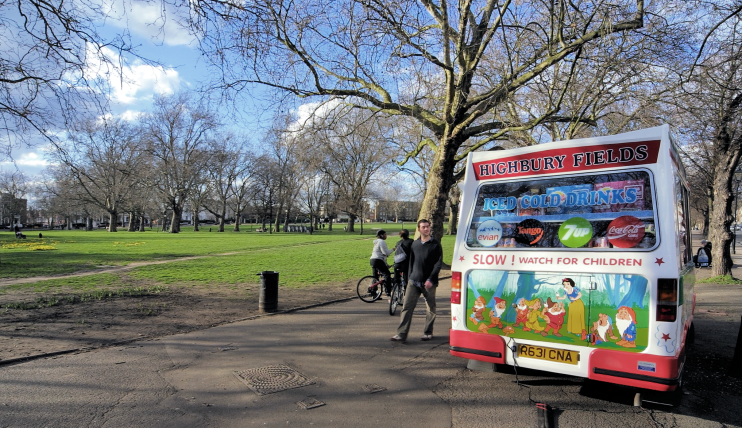 In the 13th century the farms and woodland here came into the posses­sion of the Knights Hospi­taller, a military monastic order. The Hospi­tallers’ manor house was burned down by Wat Tyler’s rebels in the Peasants’ Revolt of 1381.

The woods were mostly cleared during the 17th century. Londoners who had been burned out of their homes in the Great Fire camped out on Highbury Fields.

In 1740 a tea and ale house opened at Highbury Barn, which had orig­i­nally been the barn of Highbury manor farm; Oliver Goldsmith later wrote of the pleasant time he had spent here.

In 1770 John Dawes, a stock­broker, began to acquire land, building a Highbury House for himself and granting building leases for the first suburban houses. Dawes died in 1788 and his son sold off most of the estate for further building. Before the century was out Highbury Fields were encircled by imposing terraces of houses.

In the 1820s Thomas Cubitt built Highbury Park, setting up his own brick­fields nearby. Thirty years later Henry Rydon added Highbury New Park. Other devel­opers constructed rows of villas in the 1860s and 1870s – again using the term ‘park’ to convey an impres­sion of quasi-rural grandeur. This growth led to the opening of Highbury railway station in 1872, when it looked a much more imposing than it does now.

Highbury Fields were saved for the public in 1885. In the same year the present Highbury Barn opened, replacing the old tavern and pleasure gardens, which had become a scene of disrep­utable activ­i­ties. The clock tower at Highbury Quadrant was erected in cele­bra­tion of Queen Victoria’s diamond jubilee in 1897. Arsenal Football Club took over the sports ground of St John’s College of Divinity in 1913 and moved to the Emirates stadium in 2006.

Unlike most parts of suburban London, Highbury saw little change between the wars as the area was already fully built up, although a few of the grandest prop­er­ties were supplanted by more afford­able terraced houses and mansion blocks.

Bombed sites were filled with new housing after the Second World War; the largest project was the London County Council’s Quadrant estate, with 611 homes.

The last of Highbury’s handful of manu­fac­turing firms moved out in the early 1960s.

Like much of the borough, Highbury has an affluent minority and a less visible, less affluent majority. Young singles make up a high propor­tion of the adult residents. A number of early villas have survived, most of which have been subdivided.

According to J. Redding Ware’s Passing English of the Victorian Era (1908), a ‘barner’ was “a roaring blade, a fast man of North London.” Such a character would have been a regular at the Highbury Barn.