A gentrified inner London suburb, though still with a significant working-class community, situated one and a half miles north of St Paul’s Cathedral 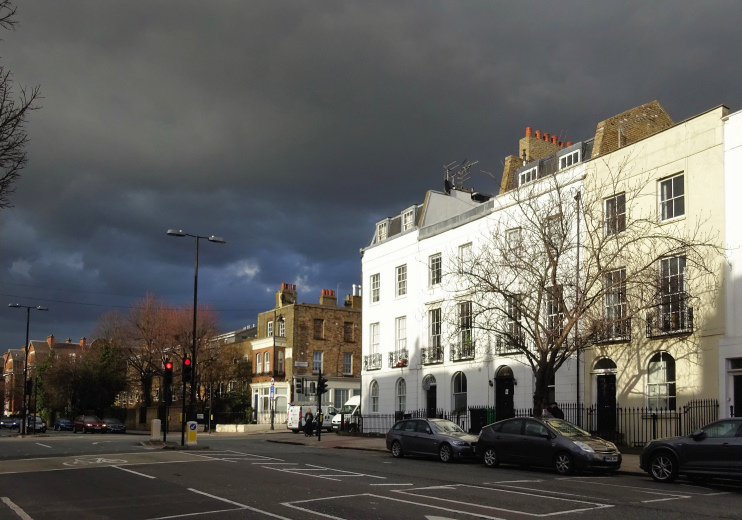 Islington was Gislandune in the year 1000, the ‘hill of a man called Gīsla’.

Until the disso­lu­tion of the monas­teries, the village’s lands were largely in the hands of religious insti­tu­tions such as the canons of St Bartholomew, who gave their name to Canonbury. Henry VIII hunted both animals and mistresses in what became Mildmay Park, remem­bered in street names such as King Henry’s Walk.

Islington was a staging post on the route north from London and the Angel takes its name from an inn on the turnpike road. The New River, built to supply London with water from Hert­ford­shire from 1609, passed through Islington on its way to the round pond at New River Head, south of the Angel. Its creator, Hugh Myddleton, is commem­o­rated by a statue at Islington Green.

By the late 18th century, tens of thousands of oxen and hundreds of thousands of sheep were passing along Islington High Street every year on their way to Smith­field. By that time Islington was devel­oping rapidly as a resi­den­tial suburb, with elegant Georgian and Victorian squares prolif­er­ating in Barnsbury and Canonbury, while Upper Street and Lower Street (now Essex Road) became busy shopping centres.

The 64-acre Mildmay estate to the east was leased for the building of middle-class and working-class homes from the 1840s onwards. During this period, much of Islington became a ‘walking suburb’ – a dormitory for the thousands of clerks who walked to work in the City of London, while street traders came to Chapel Market. Islington’s rural connec­tion survived with the building of the Smith­field Club’s Agri­cul­tural Hall in 1862. The hall was later used for almost every imag­in­able kind of event and was the original venue for Cruft’s dog show. It is now a business design and exhi­bi­tion centre.

The opening of the palatial Highbury and Islington station in 1872 symbol­ised Islington’s role as the typical commuter suburb; appro­pri­ately Weedon Grossmith, co-creator of the arche­typal commuter subur­banite Mr Pooter in The Diary of a Nobody, lived in Canonbury Place in the 1890s.

Soon, however, the middle classes were choosing to move even further out of central London; large homes were subdi­vided and Islington became a working-class area. It was partly in grim appre­ci­a­tion of its down-at-heel grit­ti­ness that George Orwell chose to move into Canonbury Square in 1944.

Islington suffered wartime bomb damage and post-war depop­u­la­tion but from the late 1950s the process of gentri­fi­ca­tion began, bringing the middle classes back to restored and revived squares and terraces. Running in parallel was the building of huge council estates such as the Marquess estate, off Essex Road, for a time reputedly the most crime-ridden in Europe and subse­quently the subject of a major regen­er­a­tion scheme.

The flour­ishing of the Camden Passage antiques market was another sign of changing times, as Upper Street in partic­ular became a golden mile of smart shops and chic restau­rants. Naturally, property devel­opers eagerly take advantage of any vacant sites that become available, creating mixed-use complexes such as Islington Square (shown in the CGI above), which has replaced a former Royal Mail sorting and delivery centre.

The composer Benjamin Britten was an Islington resident for the last ten years of his life, although he died in Aldeburgh, Suffolk.

The writer Joe Orton lived in Noel Road from 1959 until his murder in 1967 by his partner Kenneth Halliwell. The pair were imprisoned in 1962 for stealing and defacing Islington library books. Reproductions of the defaced and doctored book jackets are now part of the Joe Orton collection held by the borough’s local history centre.

* The picture of Liverpool Road, Islington, at the top of this page is adapted from an original photograph, copyright David Holt, formerly at Flickr, where it was made available under the Attribution 2.0 Generic licence. Any subsequent reuse is freely permitted under the terms of that licence.