A commercial quarter and busy road junction at the southern end of Islington High Street, best known to non-Londoners for its place on the Monopoly board 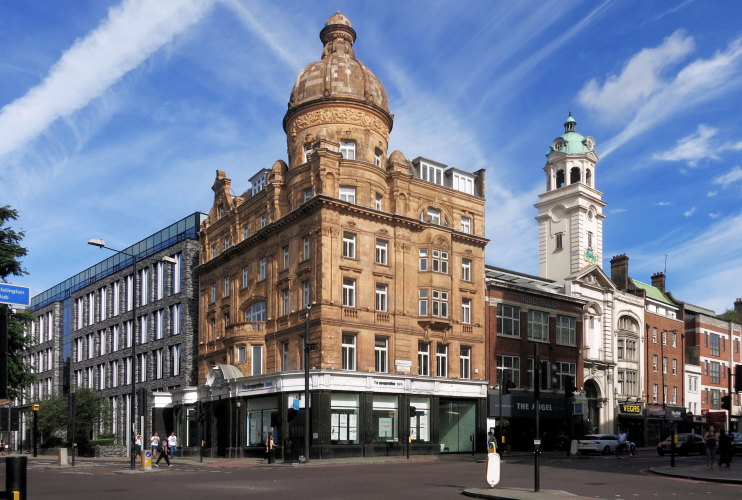 Goswell Road follows a Saxon route out of the City, and the Romans are also believed to have built a road through here. A tavern may have been estab­lished as early as the 13th century, with a sign showing the Angel of the Annun­ci­a­tion with the Virgin Mary. However, the first public house that defi­nitely stood here was the Sheepcote in 1614 and the first confirmed use of the Angel name came when this house was rebuilt in 1638.

The Angel was a coaching inn with a galleried yard, offering enter­tain­ment by groups of trav­el­ling actors and players. It was popular with overnight guests who were trav­el­ling to the City but did not want to risk highway robbery on the hazardous last stretch of their journey. Following the creation of what became City Road in 1761 a turnpike was set up at the Angel; it was moved eastward in 1800.

The galleried inn was demol­ished in 1819 and rebuilt the following year. The Angel was rebuilt yet again at the turn of the 20th century, this time in Flemish style by the archi­tects Frederick Eedle and Sydney Meyers, who were estab­lished public house specialists. 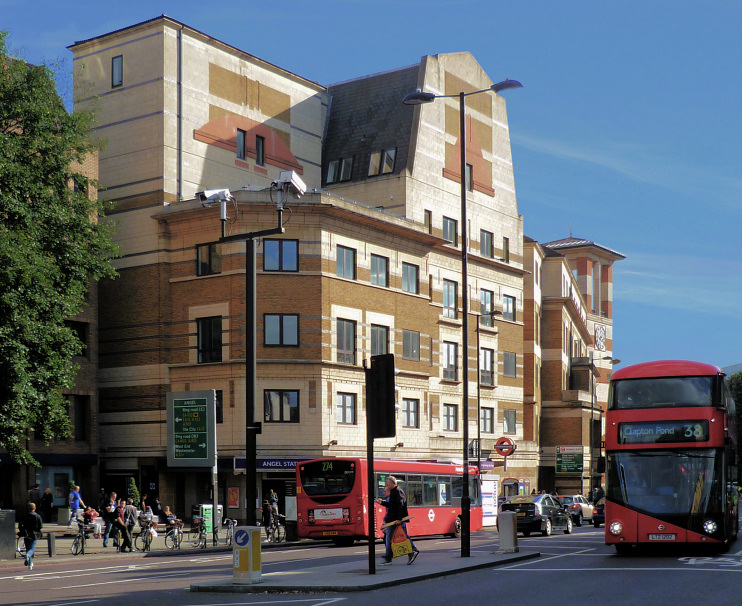 Angel tube station opened in 1901, by which time the surrounding area had become very run-down. Slum clearance after the Second World War brought some improve­ment. In recent decades the construc­tion of commer­cial and apartment complexes has trans­formed much of the vicinity.

A branch of the Co-operative Bank occupies the ground floor of the former inn, but Wether­spoon’s Angel is right next door. The pub’s northern neighbour is a Starbucks that occupies the surviving section of the Angel picture theatre (1913). Its campanile-style tower (which has been converted to resi­den­tial use) is visible on the right of the photo­graph at the top of the page.

Across the road, the recon­structed tube station is now part of the post­modern Angel Square complex, built in 1987–91. Although Angel Square was never much liked by Isling­to­nians, a proposal to ‘reimagine’ it as ‘a piece of exemplar archi­tec­tural and sustain­able design’ was widely crit­i­cised, and campaign group the Twentieth Century Society formally objected. The proposal envisaged the complete removal of the brick and stone façade and all deco­ra­tive elements, while retaining the rein­forced concrete structure of the existing building. Islington Council’s planning committee granted permis­sion for the project in September 2022, and work is expected to start on the site in 2023.

Inspired by the French Revolution, the republican Thomas Paine probably wrote the first part of The Rights of Man while staying at the Angel in 1790, although some have suggested that he was at the Old Red Lion.

Waddington’s brought fame to the Angel by including it in the British version of the Monopoly board game, which the company first produced in 1935.

* The picture of the Angel, Islington at the top of this page is slightly modified from an original photograph, copyright Des Blenkinsopp, at Geograph Britain and Ireland, made available under the Attribution-ShareAlike 2.0 Generic Licence. The picture of Angel tube station is adapted from an original photograph by Philafrenzy at Wikimedia Commons, made available under the Creative Commons Attribution-Share Alike 4.0 International licence. Any subsequent reuse is freely permitted under the terms of those licences.