A tube station in north Highbury, south of Finsbury Park 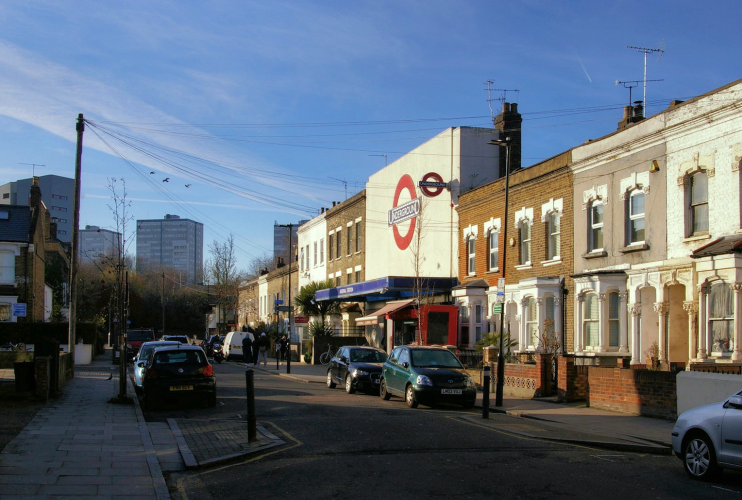 Arsenal football club is far from being a ‘hidden’ feature of London but its early geograph­ical history is not widely known. In 1913 St John’s College of Divinity leased its sports ground at Highbury to Woolwich Arsenal football club, which had been founded in 1886 as the works team of the Royal Arsenal at Woolwich. Tottenham Hotspur and Orient football clubs (the latter then playing at Clapton) objected to the relo­ca­tion but were overruled.

The club’s achieve­ments were modest until York­shireman Herbert Chapman took over as manager in 1925. A strict disci­pli­narian and canny busi­nessman, Chapman guided Arsenal to FA Cup victory in 1930 and then to three league cham­pi­onships. To honour the club’s successes, Gillespie Road station (shown in the photo above*) was renamed Arsenal in 1932. Highbury stadium was erected during the following few years, to the design of Archibald Leitch, who was respon­sible for most of the great British stadia of the interwar era.

St John’s College was demol­ished after a fire in 1946 and the insti­tu­tion subse­quently relocated to Northwood (now in the London Borough of Hillingdon) before settling in Bramcote, Notting­hamshire in 1969. St John’s has a website that makes absolutely no mention of the secular detail that one of the world’s best-known football clubs owes its Islington existence to the college.

Arsenal played their last compet­i­tive game at Highbury on 7th May 2006, beating Wigan Athletic 4–2. Since the 2006/7 season, Arsenal have played at the Emirates Stadium in nearby Drayton Park.

Highbury’s art deco east and west stands have been converted into apart­ments, while the former pitch has become a commem­o­ra­tive area and community garden, which you can see just to the right of centre in the satellite view below.

* The picture of Gillespie Road and Arsenal tube station, on this page is adapted from an original photograph, copyright Christopher Hilton, at Geograph Britain and Ireland, made available under the Attribution-ShareAlike 2.0 Generic Licence. Any subsequent reuse is hereby freely permitted under the terms of that licence.