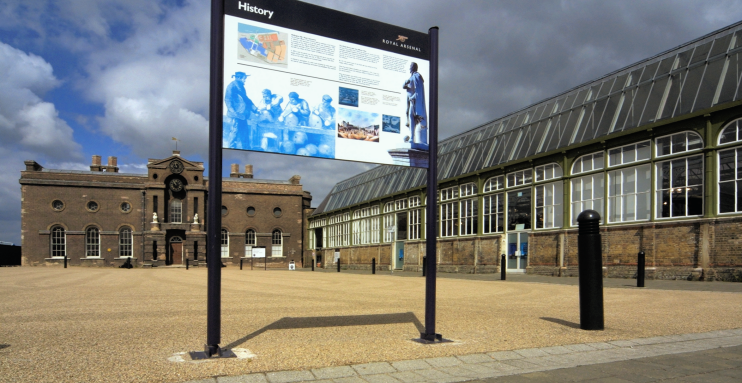 A community has existed by the Thames at Woolwich (pronounced ‘woolitch’ or ‘woolidge’) since at least the Iron Age, and the Romans built a fort here. The Old English place name probably means ‘trading place for wool’, but no evidence has been found of a wool market.

In 1513 Henry VIII founded a dockyard here to build the royal ship Henri Grace à Dieu, popularly known as the ‘Great Harry’. Subse­quent naval expansion brought a rope yard, ordnance storage and a gun battery to the water­front, which at that time may have lain as much as 200 feet south of the present shoreline. Elizabeth I came to Woolwich in 1559 to mark the launch of her ship Elizabeth Jonas.

In 1695 the Royal Labo­ra­tory was estab­lished next to Tower Place, manu­fac­turing explo­sives, fuses and shot. It was built on a site known as Woolwich Warren, which was named for its large rabbit popu­la­tion. A burst of activity from 1716 to 1720 saw the formation of the Royal Regiment of Artillery and the construc­tion of its first barracks – as well as of a brass foundry, a new mansion house and the ‘great pile’ of buildings at Dial Square, which was probably the work of Nicholas Hawksmoor. The Royal Military Academy was founded at Woolwich in 1741.

From 1776 redundant naval vessels were moored offshore to accom­mo­date prisoners who would otherwise have been sent to the American colonies, then in rebellion against the Crown. Convict labour was used to build new wharves and to dredge silt from the river.

Woolwich Common – which formerly covered a much wider area extending into Charlton – was gradually encroached upon for the construc­tion of army quarters. At the height of Britain’s empire-building much of the British Army used to camp on the common until called forward to the Royal Arsenal to collect stores and ammu­ni­tion before embarking on ships moored in the Thames. Between 1776 and 1802 new barracks were built on Woolwich Common for the Royal Regiment of Artillery.

In 1805 the Royal Arsenal was offi­cially estab­lished and no expense was spared in making this the world’s foremost munitions works.

The Royal Military Academy moved to the east side of Woolwich Common in 1808. The academy taught every branch of military science, as well as French and Latin, writing, fencing and drawing. Among the magnif­i­cent military buildings on the common is the Rotunda, designed by John Nash for an exhi­bi­tion in St James’s Park in 1814 and moved here six years later, when it became the first military museum.

The dockyard was extended in 1833 and again in the 1840s, when modern docks were built. Woolwich Arsenal and Dockyard stations opened in 1849 on the South Eastern Railway’s new line from London Bridge to Dartford, Gravesend and Strood. Shops lined the main streets and Woolwich became north Kent’s principal commer­cial centre.

Such was the pressure of expansion that growth began to spill over into Plumstead in the 19th century and later into Eltham.

The prison hulks were abolished in 1858 and the dockyard closed in 1869, when the site was handed over to the War Depart­ment for use as an annexe of the Royal Arsenal. The common continued to be used as an artillery firing range until 1860.

Workers from the Royal Arsenal set up a buyers’ co-operative in 1868, operating at first from members’ houses in Plumstead and then from 147 Powis Street as the Royal Arsenal Co-operative Society. In 1886 another group of workers estab­lished a football club, known initially as Dial Square, and then Royal Arsenal. On moving to Highbury in 1913 the club shortened its name to Arsenal.

By the early 20th century the Royal Arsenal covered 1,285 acres. Including its testing ranges, the site measured three miles long by one mile wide, and had three separate internal railway systems. At the outbreak of the First World War the Royal Arsenal employed over 70,000 workers.

The Royal Military Academy closed in 1939 and was re-estab­lished eight years later at Sandhurst in Berkshire. After the Second World War declining demand for armaments prompted the arsenal’s diver­si­fi­ca­tion into manu­fac­turing for civilian purposes, from railway trucks to automated equipment for the silk-weaving industry.

The Royal Ordnance factory closed in 1967, although many of the buildings continued to be used for testing and storage. Much of the new town of Thames­mead covers the arsenal’s eastern testing ranges.

In an IRA bombing in November 1974, two died and many more were injured when a device was hurled through a window of the King’s Arms, opposite the Royal Artillery Barracks.

In 1975 Woolwich acquired the UK’s first McDonald’s hamburger restau­rant, which took the place of a branch of Burton’s, the tailors.

Military use of the Royal Arsenal site ceased alto­gether in 1994 – the culmi­na­tion of a period of decline from which Woolwich is only now recov­ering. The arsenal’s buildings were taken over by English Part­ner­ships for the devel­op­ment of housing, light industry and leisure facilities.

A new Greenwich Heritage Centre opened at Royal Arsenal West’s Building 41 in 2003. One of the nearby buildings became Firepower – The Royal Artillery Museum. Both these insti­tu­tions have since closed, promising to reopen at new locations without indi­cating when this might be.

The 16th Regiment Royal Artillery left Woolwich Common for rural Rutland in 2007. The barracks are presently home to the King’s Troop and also serve as the Royal Artillery’s National Reserve Headquarters.

At present, the propor­tion of council tenants in Woolwich is very high while owner-​​oc­cu­pa­tion is low but rising. Woolwich has been touted by some property consul­tants as south London’s ‘next big thing’ because of its improving transport links, the devel­op­ments on the Royal Arsenal site and its selection of well-​​built Georgian terraces.

As well as the trans­for­ma­tion of the arsenal site, several other changes have taken place lately, notably in the form of improve­ments to key public spaces. The Royal Borough of Greenwich is promising much more to come over the next 20 years, espe­cially in the vicinity of the new Elizabeth line (Crossrail) station in the zone called Royal Arsenal Riverside.

On the afternoon of 22 May 2013 British Army soldier Fusilier Lee Rigby was attacked and killed by two radical Islamists near the Royal Artillery Barracks.