A wartime housing estate in north Eltham, containing the grounds and barn of a Tudor mansion 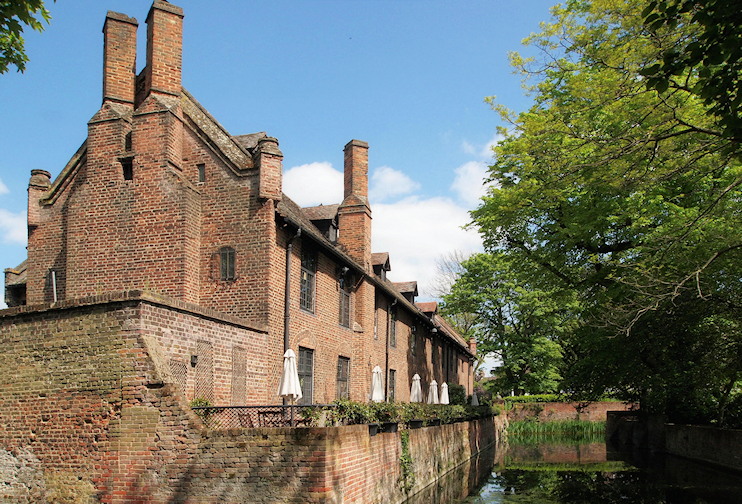 Well Hall was recorded as early as the 13th century and its great house was built for the landowner Sir William Roper and his wife Margaret, daughter of Sir Thomas More, after their marriage in 1521. Sir Gregory Page bought the property in the 1730s and demol­ished the house but its inner moat and barn (shown in the photo above*) have survived, the latter as a restau­rant and function venue.

In 1905 Woolwich council created Well Hall Road (now the A205) from the country track that had been Woolwich Lane, and it became a tram route in 1910. Following the outbreak of the First World War, the govern­ment acquired 96 acres of farmland on either side of Well Hall Road to build an estate for munitions workers at Woolwich. Construc­tion workers were drafted in from all parts of London to build 1,300 homes on ‘garden city’ lines and the project was completed by December 1915. Despite the urgency, the Ministry of Works team, led by Frank Baines, achieved high archi­tec­tural standards, espe­cially in terms of stylistic variation. Many of the three miles of roads curved with the contours of the land and field boundary trees were retained where possible.

The new estate’s streets were named after men with histor­ical asso­ci­a­tions with Woolwich, mostly in munitions produc­tion but with one notable exception: Lovelace Green is named after the poet Richard Lovelace, who was born at Woolwich in 1618. He is best known for the lines ‘Stone walls do not a prison make / Nor iron bars a cage’, from his poem To Althea, From Prison.

In 1925 the govern­ment sold the Well Hall estate to the Royal Arsenal Co-operative Society, which renamed it the Progress estate. The house that Sir Gregory Page built to replace Well Hall (which was later given the same name) was pulled down in 1931 and the gardens of Well Hall Pleas­aunce were laid out in its place.

A swathe of land across the estate had been left empty for the planned construc­tion of Rochester Way, which came through in the early 1930s, leading to the creation of the Well Hall round­about. At the same time Sir Gilbert Scott’s church of St Barnabas was relocated here from Woolwich Dockyard.

The Well Hall Odeon opened in 1936 and later became the Coronet.

The Well Hall estate gained conser­va­tion area status in 1975 and the Co-operative Society sold its interest in the estate to the Hyde Housing Asso­ci­a­tion in 1980.

The Coronet closed in 1999 and lay derelict and vandalised for more than a decade. In 2012 the cinema was at last converted and extended to form a devel­op­ment of 53 flats and a parade of shops, including a Tesco Express. Perhaps the delay was worth it: the art deco corner frontage is once again looking excellent. It’s a shame some of London’s other unwanted cinema buildings couldn’t have been saved in a similar way.

The writer Edith Nesbit lived at Well Hall from 1899 to 1922, the politician Herbert Morrison lived with his family in Well Hall Road from 1923 to 1929, and the actress Sylvia Syms grew up in Maudsley Road in the 1930s.

St Barnabas’ church hall is named in honour of the comedian Frankie Howerd, who grew up in Arbroath Road.

* The picture of Well Hall barn and moat at the top of this page is adapted from an original photograph, copyright David Hallam-Jones, and the picture of St Barnabas, Rochester Way is slightly modified from an original photograph, copyright Stephen Richards, both at Geograph Britain and Ireland, made available under the Attribution-ShareAlike 2.0 Generic Licence. Any subsequent reuse is hereby freely permitted under the terms of that licence.