Once dubbed the ‘town of the twenty-first century’ Thamesmead is a vast housing estate, with some peripheral industry, situated on former marshland between Woolwich and Erith 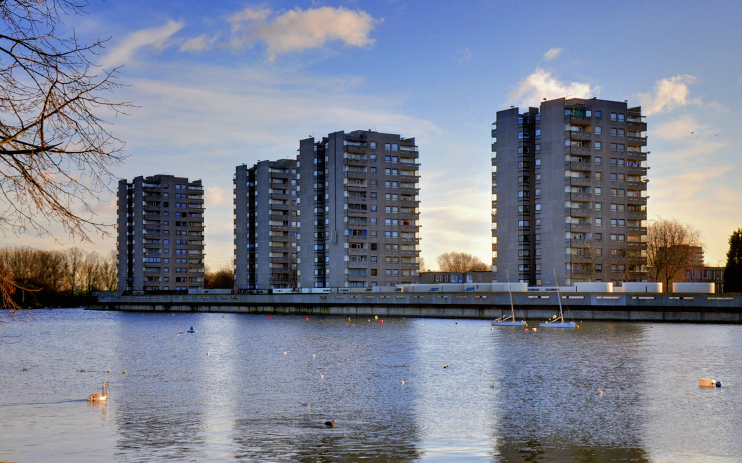 The River Thames here makes its most northerly excursion within Greater London, so Thames­mead is on the same latitude as West­min­ster. Its name was the winning entry in a newspaper compe­ti­tion, although it has been suggested that the planners always had that name in mind – and they simply waited for a compe­ti­tion entrant to come up with it too.

After the land was vacated by the military, the Greater London Council developed Thames­mead in fits and starts from the mid-1960s to the early 1980s. The area was divided into sectors, of which Thames­mead South was the main housing zone, while Thames­mead East was initially desig­nated for industry and commerce. Thames­mead Central offers the majority of the town’s retail facil­i­ties – but these are woefully inad­e­quate for a settle­ment of such propor­tions. Thames­mead North was the last of the munic­i­pally built zones, while Thames­mead West later saw private devel­op­ment on a major scale. The first buildings used pre-cast concrete but this was subse­quently abandoned in favour of more humane materials.

As the map below shows, the topog­raphy is dominated by a series of lakes and canals that serve to drain surface water – as well as providing good fishing and relieving the starkness of the built environment.

After the abolition of the GLC, the estate’s ownership trans­ferred to a trust company and the founders’ wishful vision of a futur­istic community has largely been abandoned in favour of tradi­tional British suburban housebuilding.

Forecasts of Thamesmead’s final popu­la­tion have halved from the original target of 100,000. Despite a rapid spurt of growth since the turn of the century, even the revised figure looks unlikely to eventuate.

Because of its remote­ness – and perhaps also its bleak ambience – Thames­mead has not proved a popular place in which to live. This has led to a spiral of decline and part of the district is now perceived as a ‘sink estate’.

In an effort to address Thamesmead’s problems, the Peabody housing asso­ci­a­tion agreed in May 2013 to work with local author­i­ties and other funders on a 10-year regen­er­a­tion project that would include the construc­tion of 700 new homes and asso­ci­ated community facil­i­ties. The figure was later revised upwards to a remark­able 3,000 homes across two housing zones. In October 2016 Bexley council’s planning committee approved Peabody’s detailed plans for the first 525 homes and outline plans for a thousand more.

Also in October 2016 the Mayor of London announced (tentative) plans for an extension of the Docklands Light Railway from Gallions Reach to Thamesmead.

Stanley Kubrick used Thamesmead South for location scenes in his 1971 masterpiece A Clockwork Orange: Southmere lake doubles as the ‘Flat Block Marina’, an old tramp is attacked under a walkway by the shopping centre and Alex dumps his fellow droogs into the water beside Binsey Walk.

From 2009 to 2013 Thamesmead’s least glamorous parts were the setting for E4’s award-winning comic drama Misfits.

* The picture of Southmere Flats at the top of this page is slightly modified from an original photograph, copyright George Rex, at Flickr, made available under the Attribution-ShareAlike 2.0 Generic Licence. Any subsequent reuse is hereby freely permitted under the terms of that licence.
NB While Hidden London regards both A Clockwork Orange and Misfits highly, neither is suitable for those of a sensitive disposition.