Laurence Housman was a younger brother of the poet AE Housman. Laurence enjoyed some success as an illus­trator, poet, play­wright and author and was a founder member of the Men’s League for Women’s Suffrage and the Peace Pledge Union. With the support and assis­tance of other leading pacifists, he opened the original Housman’s Bookshop (with an apos­trophe in those days) on Shaftes­bury Avenue in October 1945. By then Laurence Housman was 80 years old and he did not play an active role in running the store, but it had been his idea and it was named in his honour. Faced with an unaf­ford­able rent increase, the shop closed after three years and its trading name passed to Peace News, which ran a mail-order book­selling business based in Finsbury Park.

In 1958 the bookshop reopened at its present location at the southern end of the Cale­donian Road in King’s Cross, with Peace News occupying the building’s upper floors. The simul­ta­neous emergence of the Campaign for Nuclear Disar­ma­ment helped the new shop to get off to a strong start. Over the years, Housmans broadened its stocklist to embrace all aspects of progres­sive politics.

In every way, this is not your typical bookstore. For a start, the place feels genuinely welcoming instead of a marketing manager’s idea of welcoming. The shelves sparkle with every vein of radi­calism, from the shop’s founding ethos of pacifism to any other ‑ism you can think of and a few you probably can’t. The Situ­a­tionism section alone is almost as big as Water­stones’ Para­normal Romance section. There are cards, posters, t‑shirts and badges and other campaigning paraphernalia.

The London Writing section is chosen with knowl­edge­able care and there’s a wide range of magazines, all threat­ening to stimulate your brain instead of numbing it. Down in the bargain basement, second­hand books are priced at £1 each. The shop also hosts regular talks, debates and book launches.

Operating on a not-for-profit basis and having acquired the building’s freehold when it first arrived here, Housmans is immune to the lure of pluto­cratic lucre. A few years back, when property spec­u­la­tors started to move in on the King’s Cross area, one developer tried to acquire the bookshop:

“No thanks,” said Housmans.

“I’m serious,” the developer replied. “I want this building. Name your price.” 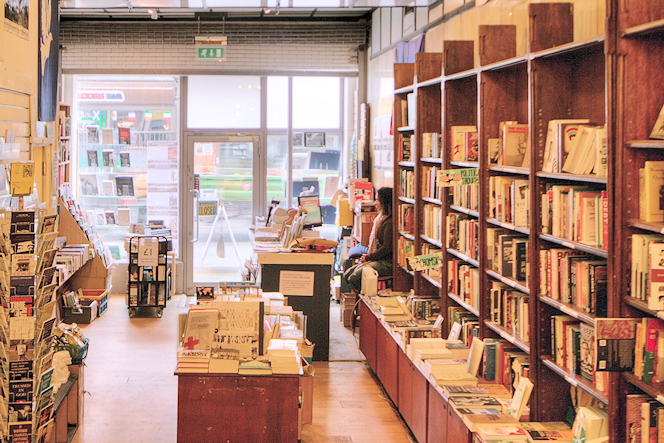