A Fox and Anchor public house has stood on Char­ter­house Street (formerly Char­ter­house Lane) for more than two centuries. The pub’s present, four-storey incar­na­tion was built in 1897–9.

The architect was Lambeth-born Latham A Withall, who trained and practised in Australia before returning to Britain in the late 1880s. The Art Nouveau tiling and grotesques that grace the pub’s facade were the work of William J Neatby, who at that time was head of the archi­tec­tural depart­ment at Doulton and Company of Lambeth, where all the ceramics were produced.

The Survey of London declares that “from an archi­tec­tural stand­point,” the Fox & Anchor is “the district’s premier pub.” It was grade II listed in 1972.

The Fox & Anchor closed in October 2006 and reopened just over a year later under new ownership, having undergone something of a gastropub makeover and with six ‘boutique bedrooms’ added on the upper floors. Most of the interior dates from the time of this refur­bish­ment, but it’s so taste­fully done that you’d hardly know.

The pub now belongs to Young’s and is open from 7am on weekdays and from 8.30am at weekends, until 11pm every night. The early start isn’t some recent mani­fes­ta­tion of Britain’s 24-hour drinking culture – the Fox & Anchor has always opened early to serve Smithfield’s market porters, which is why its break­fasts are so famously filling.

As Time Out has commented, “Only its excru­ci­ating slogan – ‘Hops and chops, cuvées and duvets’ – strikes a false note at this Smith­field treasure.” 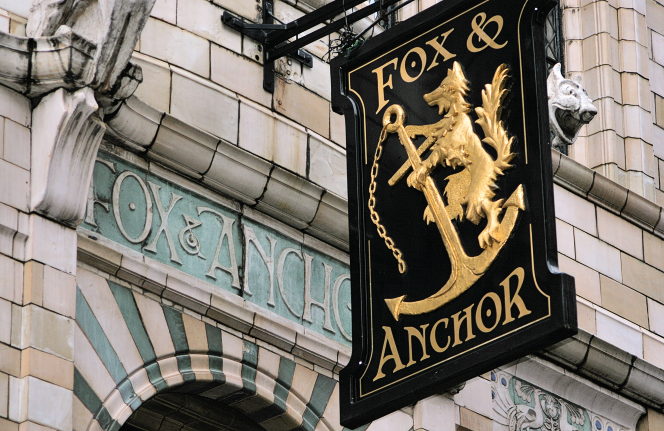