The City of London’s main shopping street for the past millennium, running eastward from St Paul’s towards Bank 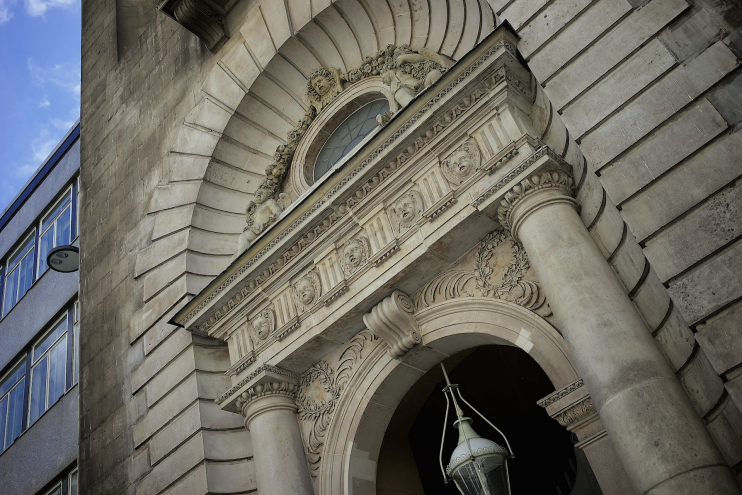 Cheapside takes its name from ‘chepe’, a Saxon word for a market. The street connected the southern end of the Roman Watling Street with the main City settle­ment to its east and its alignment was dictated by a conve­nient bridging point across the (now subter­ranean) River Walbrook.

The first church of St Mary-le-Bow was built c.1080 by Arch­bishop Lanfranc, and may have replaced a church of Saxon origin. Its name probably refers to the bowed shape of the arches supporting its under­croft, which were a novelty at that time.

Market buildings were constructed along the roadside from the late twelfth century, with low roofs that later formed viewing platforms for jousting tour­na­ments. At that time the layout of Cheapside was more like a market­place than a street: up to 62 feet wide but with very narrow exits at each end. Side streets acquired names that indicated their early special­i­sa­tions: fish­mon­gers traded on Friday Street, while Honey Lane, Milk Street and Wood Street are self-explanatory.

Another side street, Gutter Lane, was first recorded around 1185 as Godrun Lane – the lane of a woman called Guthrún – and had become corrupted to its present form by the 15th century. This was an early place of residence for the City’s gold­beaters. ‘Gutter Lane’ was formerly a slang term for the throat, a pun on Latin guttur, ‘throat’, as in ‘guttural’.

Cheapside itself became the centre of the jewellery trade, where most London gold­smiths sold their wares, but it was destroyed in the Great Fire of 1666. It was laid out after­wards with the bottle­necks removed, forming a contin­uous link with Poultry, the connecting street to its east.

Sir Christo­pher Wren rebuilt St Mary-le-Bow in 1680, with a tower that used the Roman gravel roadway as its foun­da­tions. By tradition, a true cockney must be born within the sound of the church’s bells.

It took some time for Cheapside to recover from the economic effects of the Great Fire but over the course of the 18th century it regained its pres­ti­gious status and in 1775 a visitor observed that with its “many thousands of candles … the street looks as if it were illu­mi­nated for some festivity,” although this was just for everyday trade.

Most of the street was rebuilt with blocks of offices from the late 19th century, with shops retained at street level.

The Cheapside Hoard, a remark­able collec­tion of early 17th-century jewellery, was discov­ered in 1912 buried in the cellar of a property at the junction of Cheapside and Friday Street.

When Sir John Bennett’s clock shop closed in 1931, motor manu­fac­turer Henry Ford acquired both the building and its famous clock and shipped them to Dearborn, Michigan, where the shop was (partially) recon­structed as part of the Green­field Village visitor attraction.

In 1933 a commen­tator wrote that “dingy-looking brown buildings have been replaced by tall and handsome buildings which give Cheapside the appear­ance of a new street.”

History did not look so kindly on most of these “handsome buildings” – nor on those erected following the destruc­tion wreaked during the Second World War. Several blocks have recently been replaced once again, bringing more office space and even more retailers and eateries, notably at One New Change.

Thomas More, statesman and author of Utopia, was born in Milk Street in 1478. Just across Cheapside, Bread Street was the birthplace of two poets, John Donne and John Milton.

Postal district: EC2
Further reading: Hermione Hobhouse, The Ward of Cheap in the City of London, Ward of Cheap Club, 1963
See also: The ward of Cordwainer