The central bank of the United Kingdom, located at the heart of the ‘square mile’ that constitutes London’s prime financial district 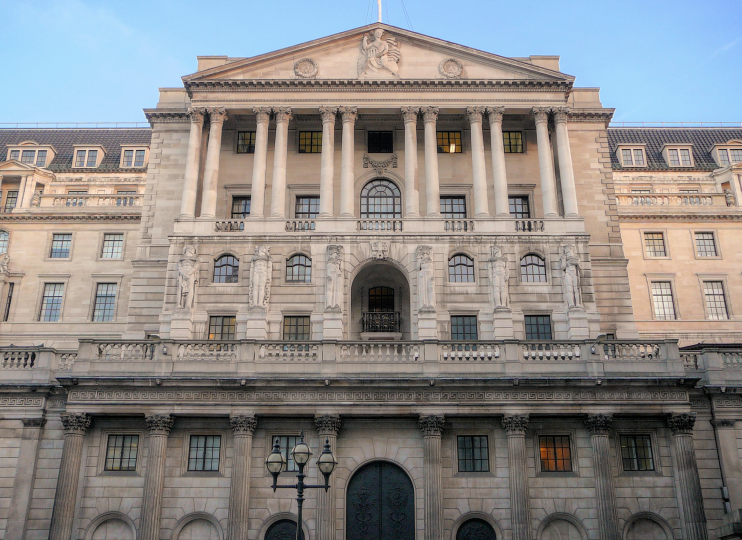 The Bank of England began in 1694 as a commer­cial operation providing funds for a war against France. At first the bank operated out of Mercers’ Hall and then Grocers’ Hall before acquiring its governor’s mansion on Thread­needle Street as the site for its own premises in 1724.

Thread­needle Street’s name probably relates to the street’s early role as a centre of the tailoring trade; the Merchant Taylors’ Company’s hall has been here since the 14th century. However, contrary to a much-repeated fallacy, neither a thread nor a needle appear in the Merchant Taylors’ coat of arms. The name first appears in 1598 as Three Needle Street and if this spelling is reliable there may be a link with the arms of the Needle­makers’ Company, in which three needles appear, or with a signboard depicting three needles that hung outside the Merchant Taylors’ hall. Thread­needle Street seems previ­ously to have been called Broad Street, forming part of what is now Old Broad Street.

By the end of the 18th century the Bank of England had become such a venerable insti­tu­tion that the dramatist Sheridan dubbed it ‘the Old Lady of Thread­needle Street’.

Gradually it became the dominant issuer of notes and the chosen bank of most depart­ments of state but it was not until the 19th century that the Bank of England fully acquired its present national role.

To the untrained eye, the bank’s present head­quar­ters appear to be an archi­tec­turally harmo­nious achieve­ment but the building is actually the product of several contro­ver­sial stages of construc­tion, extension and reconstruction.

Between the two world wars the bank was further enlarged in the only direction left: upwards. This project neces­si­tated the recon­struc­tion of most of Soane’s interiors, although attempts were made to retain the character of the original halls. A statue of Ariel was added atop the dome at Tivoli Corner.

The Bank of England Museum traces the institution’s history and displays a collec­tion of ingots, coins and banknotes.

The present Bank station is an amal­ga­ma­tion of City station, which operated the ‘drain’ service to Waterloo from 1898, and Bank, which was opened by the City and South London Railway Company in 1900 and became the eastern terminus of the Central London Railway later that year. The station has been nicknamed ‘the worm’ for its twisting network of pedes­trian tunnels inter­con­necting its platforms and those at Monument.