One of the City’s smallest wards, bounded by Cheapside and Poultry, Walbrook, Cannon Street and Bread Street

‘Cordwain’ – a corrup­tion of ‘Cordovan’ – was the English word for fine Spanish leather. The Andalu­sian city of Córdoba was (and to some degree still is) renowned for the manu­fac­ture of supple yet strong and water­proof leather.

London’s cord­wainers were shoe­makers (and orig­i­nally other leather workers too) and many of them plied their trade in what is now Bow Lane but in the Middle Ages was called Cordwainer’s Street – which was also the name of the ward.

The Guild of Cord­wainers was in existence by 1272 and obtained a royal charter in 1439. The last incar­na­tion of the Cord­wainers’ livery hall (which was not in the ward of Cord­wainer) was destroyed in the Blitz and the Worshipful Company of Cord­wainers is nowadays a tenant at Cloth­workers’ Hall, which is over to the east in Tower ward.

The ward takes in two grade‑I listed Wren churches: St Mary Aldermary and the most famous of all the City’s churches (not counting a certain cathedral) – St Mary-le-Bow.

The nicest part of Cord­wainer lies between the two St Marys: a mostly pedes­tri­anised group of narrow streets and alleys crowded with places to shop, eat and drink – including Williamson’s Tavern in Groveland Court.

Elsewhere, the ward is dominated by the usual City mix of financial sector insti­tu­tions and their ancillary service providers. The aggres­sively post­modern office and retail complex called No 1 Poultry stands at Cord­wain­er’s north-east corner.

The built envi­ron­ment of Cord­wainer has undergone signif­i­cant change over the past decade, culmi­nating in the construc­tion of the European head­quar­ters for the New York-based business and financial infor­ma­tion company Bloomberg LP. The scheme fills almost the entire south-east quadrant of the ward and consists of two buildings – one very large and one posi­tively mono­lithic – each ten storeys tall, plus three subter­ranean levels. The pair are separated by a pedes­trian arcade and connected by several bridges. Museum of London archae­ol­o­gists uncovered more than 14,000 artefacts at the construc­tion site and went so far as to nickname it ‘the Pompeii of the North’.

Alma Boyes’s bronze statue of a cordwainer at work (shown above) was commissioned in 2002 by the City of London Corporation and the Ward of Cordwainer Club to mark the club’s centenary. It was unveiled in Bow Churchyard before its relocation to a permanent home in the newly paved area of Watling Street beside St Mary Aldermary church. 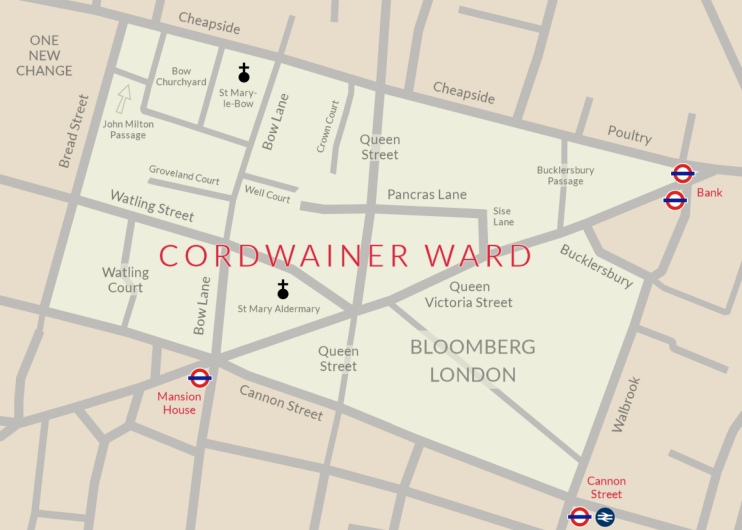 * The picture of the Cordwainer statue at the top of this page is adapted from an original photograph by ‘Eluveitie’ at Wikimedia Commons, made available under the Attribution-ShareAlike 3.0 Unported licence. Any subsequent reuse is freely permitted under the terms of that licence.