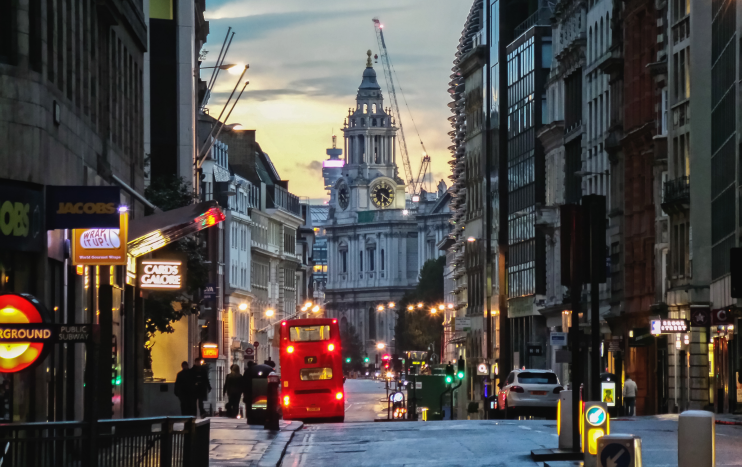 Linking the Monument to St Paul’s Church­yard, Cannon Street traces the route of the ancient riverside track that ran alongside the Thames towards the Strand. It was first recorded in 1183 as Candelewrith­stret – the street of the candle-wrights. The City ward of Candlewick takes its identity from the same root.

Cannon Street used to stretch only as far west as Walbrook. It took its present form in the mid-1850s, when a path was cleared through a network of small lanes south-east of St Paul’s and the whole route was widened.

Cannon Street station and its accom­pa­nying bridge over the Thames opened in 1866. The station served as the new terminus of the South-Eastern Railway, which had orig­i­nally run into London Bridge. British Rail recon­structed the bridge in 1981 and an office block was built over the station later in the same decade.

London Stone is a block of oolitic limestone on external display at 111 Cannon Street. The photo below shows the stone in 2003. It is an ancient relic of uncertain history. The present stone is merely a chunk (perhaps the uppermost part) of the original, which was described as a ‘pillar’, set deep into the ground. There is no record of how or when it came to be frag­mented or what happened to the rest of it, but the diminu­tion must have happened many centuries ago; a woodcut of c.1700 shows a stone of the same size as it is today.

London Stone has been the subject of various legends, including that Brutus brought it here from Troy, that it marked the site of Druidic sacri­fices, and that London’s pros­perity depended on its safe­keeping. The antiquary William Camden thought it to be the point from which the Romans measured distances. Another theory is that it was an Anglo-​​Saxon cere­monial stone or a focus for judicial proceed­ings. Edward III made it the axis of the city’s trade in 1328, when he granted Londoners the right to hold markets within a 7-​​mile (11-​​km) radius of London Stone, as it had by then come to be known.

According to Holinshed’s Chron­i­cles (1577), the 15th-century rebel Jack Cade struck the stone with his sword when proclaiming himself master of the city, and the incident is mentioned in Shakespeare’s Henry VI, Part 2. The visionary artist and poet William Blake regarded London Stone as the hidden centre of London and of the world, the modern equiv­a­lent of the Omphalos at Delphi, and he alluded to it repeat­edly in Jerusalem: The Emanation of the Giant Albion (c.1821). Blake seemed to believe that it should be the foun­da­tion stone upon which a new and divine city must be built.

London Stone was placed against the wall of St Swithin’s Church in 1798 as a safeguard against its destruc­tion. When a bomb destroyed the church in 1940 the Corpo­ra­tion of London moved the stone to Guildhall. In 1962 it was relocated to the Bank of China building that belatedly replaced St Swithin’s.

From early in the 21st century the post-war block was repeat­edly the subject of rede­vel­op­ment proposals, none of which got off the drawing board until planning permis­sion was finally granted in March 2016. The Bank of China building has since been demol­ished and replaced by an office block commis­sioned by London & Oriental. During the recon­struc­tion process the Museum of London exhibited the stone. London Stone was restored to 111 Cannon Street in October 2018, housed in a similar unit to its St Swithin’s antecedent. 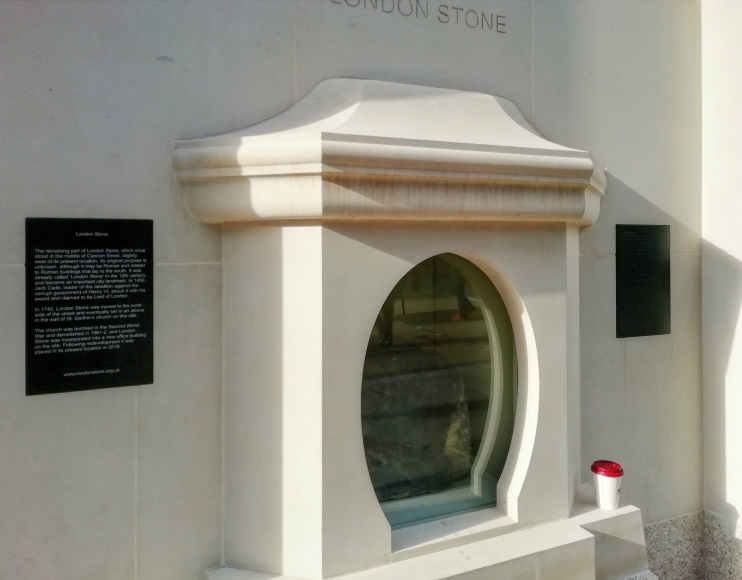 * The picture entitled ‘Looking Down Cannon Street’ at the top of this page – which shows the view down the entire length of the street – is cropped from an original photograph, copyright Garry Knight, at Flickr, made available under the Attribution 2.0 Generic Licence. Any subsequent reuse is freely permitted under the terms of that licence.