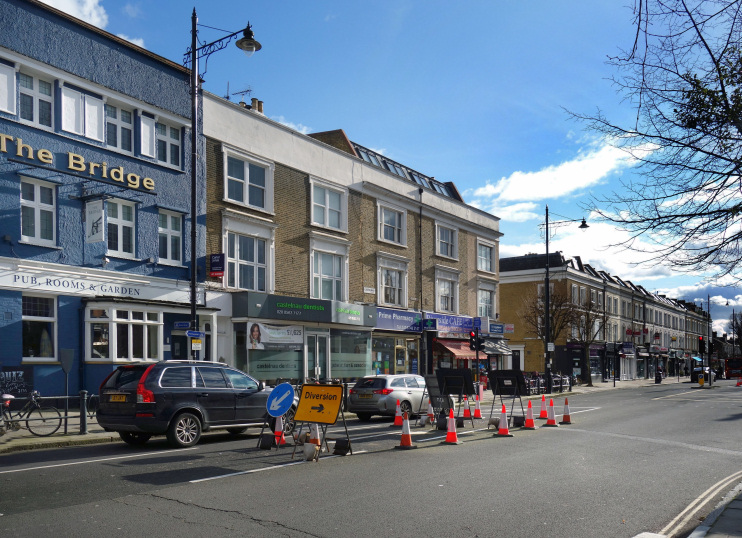 Until the opening of Hammer­smith Bridge in 1827 the only way to cross the river to this point was by ferry from Chiswick.

When Major Charles Lestock Boileau built his home here he called it Castelnau House after his family’s former estate of Castelnau de la Garde, near Nîmes in France. Boileau’s family were Huguenots who had fled to England to escape religious perse­cu­tion and settled in Mortlake.

In 1843 Boileau began to build Castelnau Villas and several rows of cottages. The church of Holy Trinity was conse­crated in 1868, by which time the settle­ment had around 140 houses and 800 residents. The popu­la­tion had more than doubled when Holy Trinity became a parish in 1888. After Boileau’s death the following year Upper Bridge Road was renamed Castelnau.

With the sale of the Boileau estate more streets were laid out and lined with housing over the next two decades. In 1928 the London County Council laid out an estate of 640 houses on the western side of Castelnau, with streets named after deans of St Paul’s, former lords of the manor of Barnes. This increased the housing stock to 2,000 and the popu­la­tion to over 5,000.

Castelnau House was demol­ished in the early 1960s and replaced by a public library. The north-western rim of the peninsula has the Harrodian, Swedish and St Paul’s schools. To the east, the former Harrods Depos­i­tory is now the centre­piece of a gated estate called Harrods Village.

Castelnau is pronounced as in ‘neither castle nor city’. The Castelnau area is increas­ingly consid­ered to include Barn Elms.

The folk-rock singer Sandy Denny died after collapsing at a friend’s house in Castelnau in April 1978.

The picture of Castelnau at the top of this page is slightly modified from an original photograph, copyright Robin Sones, at Geograph Britain and Ireland, made available under the Attribution-ShareAlike 2.0 Generic Licence. Any subsequent reuse is freely permitted under the terms of that licence.