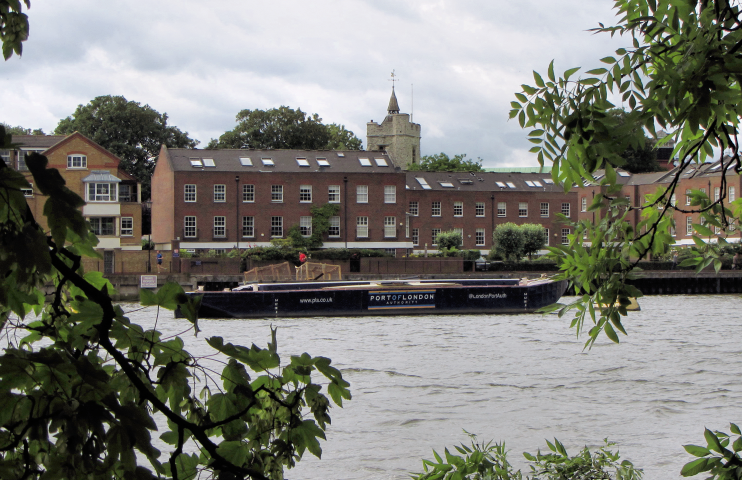 Chiswick (pronounced chizzik) grew up as a Thames-side fishing village, sited somewhere very near present-day Chiswick Wharf, shown in the photo­graph above.* Its name is usually reckoned to have meant ‘farm or trading settle­ment where cheese is made’ but it is possible instead that the eponymous char­ac­ter­istic here was not cheese but chesil – an old word for shingle (as in Dorset’s Chesil Beach). This spot could therefore have been a ‘shingly trading place’ rather than a cheesy one.

There may have been a pagan shrine here in the 7th century but the first reliable confir­ma­tion of the settle­ment’s existence came in a document written around the year 1000 – when its name was rendered as Ceswican.

In 1181 the village’s name was spelt Chesewic and the presence of St Nicholas’ church was first recorded. The dedi­ca­tion of a church to St Nicholas, patron saint of sailors and fishermen, was common practice where the parish­ioners’ liveli­hoods depended on water. The present church dates from the 15th century but it was mostly rebuilt in 1884. St Nicholas’ tower is visible in the top photograph.

The 16th-century Walpole House is the grandest villa on what is now called Chiswick Mall. Though much altered, the house’s imposing façade indicates the status of many of the village’s residents at that time. By the late Middle Ages Chiswick encom­passed the hamlets of Little Sutton, Turnham Green and Strand on the Green, across the peninsula.

Shown in the photo below, Chiswick House was built in Palladian style by the Earl of Burlington in 1729. Of modest propor­tions by aris­to­cratic standards, its splendid decor and ornate ceilings have been faith­fully restored by English Heritage. Both the house and its estate were enlarged by Burlington’s heirs, the dukes of Devonshire. 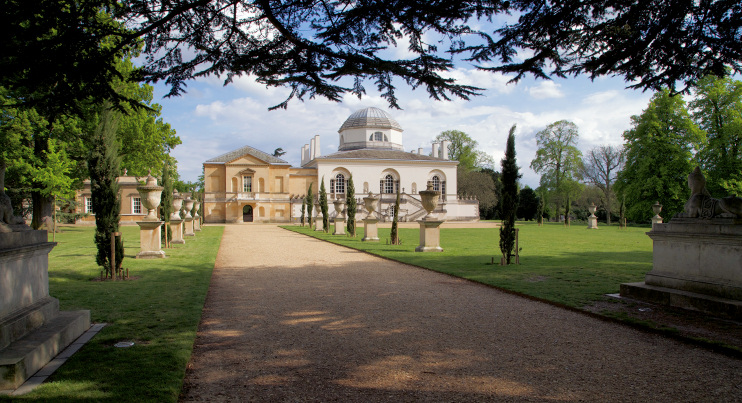 William Hogarth acquired a ‘little country box’ close to Chiswick House in 1749 and spent most of each summer here until his death in 1764. Built in the 1710s, Hogarth’s House is now a museum of his life and a gallery of his work. The artist’s tomb, with a poetic epitaph by his friend David Garrick, stands a short distance to the east of the house in St Nicholas’ churchyard.

Building on a centuries-old tradition of ‘Chiswick ales and stout’, the present Griffin Brewery opened in 1828. In the following year wealthy Wiltshire squire John Fuller made his first invest­ment in the business, progres­sively increasing his stake there­after. His son brought in outside expertise (and more invest­ment) from two key figures at Romford’s Ind & Smith brewery, signing up to the Fuller, Smith & Turner part­ner­ship in 1845. Fuller’s now owns more than 150 pubs in London, with an emphasis on estab­lish­ments with a bit of character. Its flagship ale is London Pride.

From the second quarter of the 19th century, the orchards and market gardens of the Chiswick peninsula began to fill with housing, much of which was subsumed under the identity of Grove Park. Chiswick New Town was an early project for the working classes, now replaced by council flats. The Glebe estate to its north was more upmarket.

On Chiswick’s northern edge, Bedford Park set a new standard for suburban housing after 1875. By this time Turnham Green had become the commer­cial heart of Chiswick. Before the end of the 19th century devel­opers had begun to demolish large villas and replace them with mansion blocks or smaller, more densely packed houses.

Acton Green & Chiswick Park station opened in 1887 and it became plain Chiswick Park in 1910, thus extending the pres­ti­gious ‘Chiswick brand’ far to the north-west of its point of origin.

The Turnham Green area is now synony­mous with Chiswick for many Londoners, and Chiswick High Road is popular for its cafés and restau­rants, and for the variety of its shops. Chiswick’s river­front and Strand on the Green are the least changed parts of this mini-conur­ba­tion, the former still grand in places, the latter hanging on to quaintness.

In 1971 Erin Pizzey founded Chiswick Women’s Aid at 2 Belmont Terrace, where she set up the world’s first shelter for battered women. This evolved into the campaigning charity Refuge, which has grown to become the UK’s largest provider of specialist domestic violence services.

* The picture of Chiswick Wharf (formerly Fisherman’s Place, and before that Slut’s Hole) at the top of this page is adapted from an original photograph, copyright Gareth James, at Geograph Britain and Ireland, and the picture of Chiswick House is slightly modified from an original photograph, copyright Tom Parnell, at Flickr, both made available under the Attribution-ShareAlike 2.0 Generic Licence. Any subsequent reuse is freely permitted under the terms of that licence.