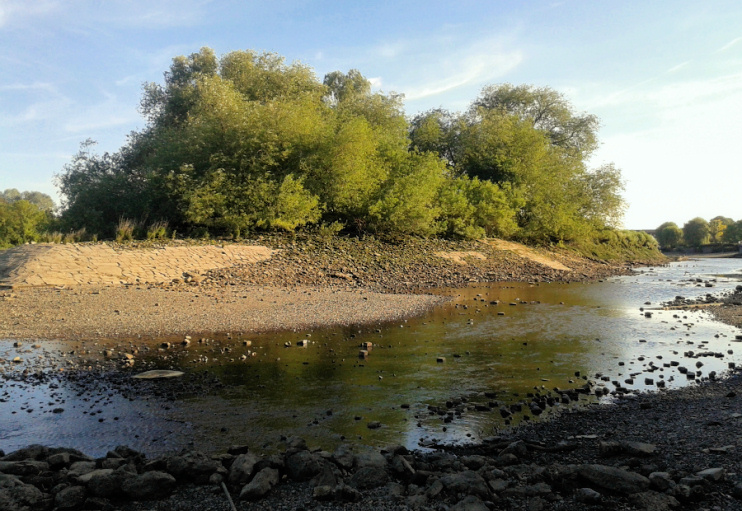 Flint tools and Neolithic and Roman pottery have been discov­ered on Chiswick Eyot (pronounced chizzik ait), indi­cating that there may once have been a small settle­ment here.

By 1800, osier beds around the island were producing willow shoots that were used to make baskets for the market gardens of Chiswick. Commer­cial culti­va­tion continued until the mid-1930s, when the borough of Brentford and Chiswick bought the island from the Eccle­si­as­tical Commissioners.

Chiswick Eyot used to be more than an acre larger than it is now (which is presently about three acres), but all of the part that used to lie within the Hammer­smith borough boundary has slipped away into the Thames. This erosion problem prompted a proposal in the 1970s to raze the entire island but the plan was shelved in the face of public resis­tance. Instead the banks were shored up during the following decade.

In 1993 Chiswick Eyot was declared a local nature reserve and it is now cared for by Thames 21 and the Old Chiswick Preser­va­tion Society. As the photo­graph below suggests, the island is acces­sible at low tide – but the preser­va­tion society asks people to go across only during one of the work days arranged as part of the envi­ron­mental manage­ment programme. This is to help protect the eyot’s fragile ecosystem – and for health and safety reasons. The Chiswick lifeboat has sometimes been called out to rescue explorers marooned by rising waters. 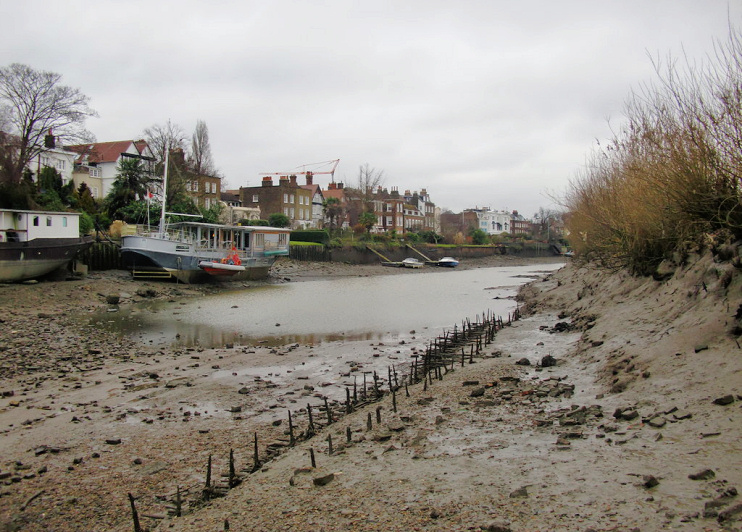 Except for Frog Island – an arti­fi­cially created waste manage­ment facility at Rainham – Chiswick Eyot is the most easterly of London’s Thames islands. It is the only insular obstacle along the ‘Cham­pi­onship Course’ that is used for the Oxford and Cambridge boat race.

Writing in 1902, CJ Cornish reported that a resident reed warbler was “locally supposed to begin his song with the words ‘Chiswick Eyot! Chiswick Eyot!’ which indeed he does pretty exactly.”

In 2010 a homeless pensioner claimed to have been living on Chiswick Eyot and the BBC gave his story some credence. Hounslow council “sent representatives” to the island, who found no evidence of recent human habitation.

* The picture of Chiswick Eyot at the top of this page is adapted from an original photograph, copyright Graham C99, originally posted at Flickr, and the picture of Chiswick Mall, seen from the muddy shore of Chiswick Eyot is adapted from an original photograph, copyright Stefan Czapski, at Geograph Britain and Ireland, both made available under the Attribution-ShareAlike 2.0 Generic Licence. Any subsequent reuse of either image is freely permitted under the terms of that licence.