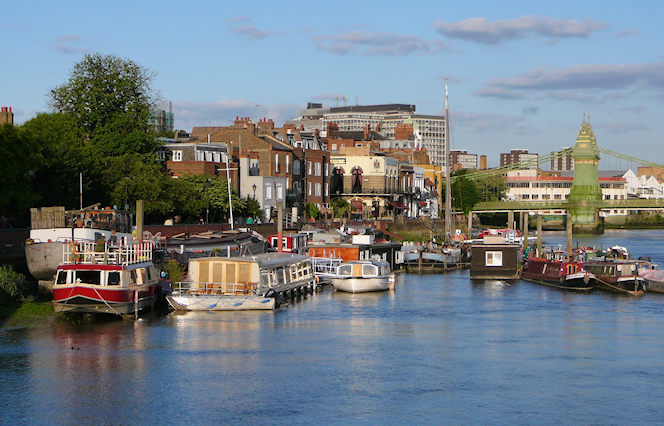 Prehis­toric pottery, flints and a leaf-shaped arrowhead have been found on the embank­ment and there is also evidence of Roman habi­ta­tion. Hammer­smith developed as a Saxon fishing village and its name (which probably refers to the presence of a hammer smithy or forge) was first recorded in 1294.

A foreshore of gravel, rather than the more common marsh, made Hammer­smith a healthy retreat for jaded Londoners from the Middle Ages onwards and a chapel of ease, later St Paul’s church, was built in 1631. Further west, boat builders, lead mills and malt­houses clustered around the outlet of Stamford Creek into the Thames.

Catherine of Braganza, queen consort of Charles II, came to live on Upper Mall in 1687 after she was widowed, and several fine villas were later built by the river here. A ribbon of houses flanked the road to London by the early 19th century and Hammer­smith Bridge opened in 1827, stim­u­lating devel­op­ment on both sides of the river. Hammer­smith gained parochial inde­pen­dence from Fulham in 1834.

Away from the riverside, a poverty-stricken settle­ment evolved at Brook Green during the mid-19th century, since when its repu­ta­tion has risen consid­er­ably. The Hammer­smith and City Railway arrived in 1864. In the late 19th century King Street became the district’s main shopping centre and the Metro­pol­itan Board of Works opened Raven­scourt Park to the public.

Much of Hammersmith’s archi­tec­tural heritage was lost in the middle decades of the 20th century as the district became increas­ingly urbanised but some important examples have survived, espe­cially by the riverside. Subse­quent gentri­fi­ca­tion has reha­bil­i­tated Victorian streets such as those in Brack­en­bury Village.

Hammer­smith flyover – dubbed ‘the gateway to west London’ – was built in 1961 and is now over­looked by the Ark, a copper and glass concoc­tion that is among several office blocks in the vicinity of Hammer­smith Broadway. This is one of London’s busiest traffic junctions, with a bus and tube inter­change and shopping mall at its centre.

Charing Cross hospital moved to its present home on the Fulham Palace Road in 1973. Maggie’s cancer centre, then the first of its kind in England, opened at the hospital in 2008.

Hammer­smith has three note­worthy arts and enter­tain­ment venues: the Lyric, a 19th-century audi­to­rium and a studio theatre encased in concrete; the Apollo, a former cinema that now hosts major rock gigs and stand-up comedy shows; and the Riverside Studios, a cinema and performing arts venue due to be rein­car­nated in 2017. Legendary ballroom the Hammer­smith Palais closed in 2007 and was demol­ished in 2012.

The riverbank west of Hammer­smith Bridge is lined with long-estab­lished inns. The Rutland and Blue Anchor are on Lower Mall, which Nikolaus Pevsner commends as “Hammersmith’s best street” and is shown in the photo­graph at the top of the page. On Upper Mall, James Thomson wrote the words to ‘Rule Britannia’ in an upstairs room at The Dove. One of its bars is reputed to be Britain’s smallest, with less than 33 square feet of floor space. Beyond the Dove you’ll come to the Old Ship and then the Black Lion before you stumble into Chiswick.

JMW Turner lived on Upper Mall from 1808 to 1814. On the same street, Francis Ronalds invented the electric telegraph in 1816, in the garden of a house in which designer-craftsman William Morris lived from the age of 45 until his death in 1896. Morris called the house Kelmscott after his Oxfordshire home and gave the same name to a publishing firm that he founded. Gustav Holst conducted the Hammersmith socialist choir at Kelmscott and composed an orchestral prelude and scherzo entitled Hammersmith.

The BBC2 sitcom Bottom (1991–5, created by and starring Adrian Edmondson and Rik Mayall) was set in a squalid flat in the fictional Mafeking Parade (or Terrace), Hammersmith. Following Mayall’s untimely death in 2014, a memorial bench was installed at the junction of Queen Caroline Street and Hammersmith Bridge Road.