A late-Victorian district occupying a broad Thames peninsula opposite Wandsworth 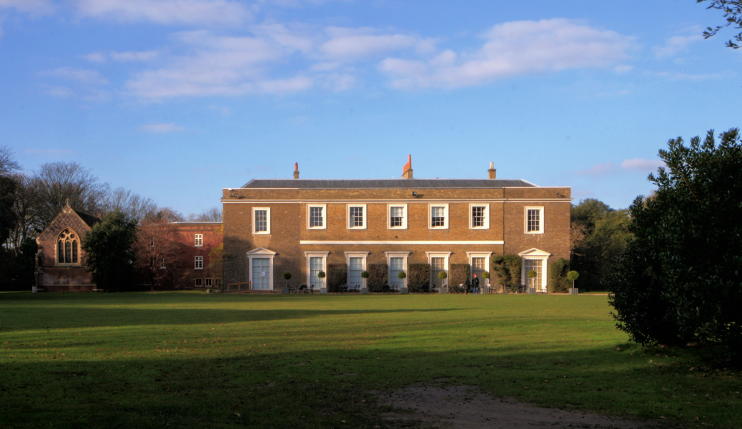 The Bishop of London acquired the manor of Fulham in 704 and Danish invaders landed here in 879. A fishing village grew up in the vicinity of the present Putney Bridge station and Fulham High Street was in existence by 1391, when it was called Burys­trete. The west tower of All Saints’ church was built around 1440. The earliest of the surviving buildings of Fulham Palace date from around 1480, when it became one of the bishop’s country retreats.

Medieval villages grew up at three distinct locations in Fulham in addition to the thriving old town: Parsons Green, Walham Green and North End. Shown in the photo­graph above, Fulham Palace became the bishop’s main residence in the 18th century.

Among the gentlemen’s retreats built in the Georgian era were Hurlingham House, later home to the pres­ti­gious sports club, and Lord Craven’s cottage orné north of the palace, built in 1780. The earlier Peter­bor­ough House was rebuilt around the same time.

Over the course of the 19th century industry filled the reclaimed marshland of Sands End. Elsewhere, terraces of suburban housing rolled out across the former market gardens and gentlemen’s estates from the 1870s.

North End was rebranded West Kens­ington and Fulham Broadway, at Walham Green, became Fulham’s admin­is­tra­tive and shopping centre. Peter­bor­ough House was demol­ished to make way for a pleasing estate that bears its name.

Fulham football club built a permanent home on the site of Craven Cottage in 1896, 17 years after the club’s foun­da­tion. In April 1904 Fulham Theatre held the first public exper­i­ment in ‘talking pictures’ with the aid of a phono­graphic soundtrack.

Much of Fulham’s new housing was built for the lower middle classes but by the 1920s large parts of the district had become wholly working class in character.

Before and after the Second World War the borough council added several housing estates, most visibly on the eastern side of West Kensington.

Fulham Palace ceased to be the bishop’s official residence in 1973 and most of its grounds were opened to the public. Gentri­fi­ca­tion since this time has been so wide­spread throughout the district that it is hard to believe that Fulham had a poor repu­ta­tion 60 years ago. The deserted indus­trial wasteland by the Thames at Sands End has provided the principal zone of oppor­tu­nity for large-scale devel­opers, beginning with Chelsea Harbour in the 1980s and reaching a crescendo at Imperial Wharf.

In underworld slang from the 16th to the late 18th centuries ‘fulhams’ were loaded dice. The word was also written as ‘fullams’, and it is not certain that there was originally any connection with this place – although Fulham was once a noted resort of ‘sharpers’.

Fulham stoneware was a hard ceramic ware, typically brown-glazed, made at Fulham Pottery from 1672.

A Fulham virgin was an ironic 19th-century euphemism for a prostitute. The name may have been inspired by the proximity of Cremorne Gardens, a resort that acquired a reputation as “a nursery of every kind of vice.”