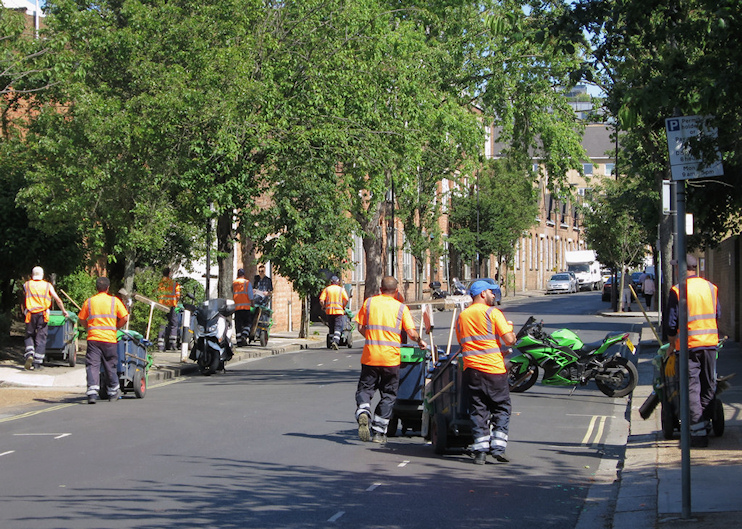 In the Middle Ages the western part of Sands End was occupied by Fulham town meadows, where villagers grazed their cattle on the marshes, while Sandford manor lay to the north-east. The manor came into the posses­sion of West­min­ster Abbey during the reign of Henry VII. Its Eliz­a­bethan manor house became a saltpetre factory in 1762 and various other kinds of factory later, including a pottery and a bleach and die works.

As drainage was improved, orchards and market gardens appeared but these were gradually erased by riverside indus­tries, starting with the Imperial gasworks in the 1820s. The Kens­ington Canal was cut across the district but proved unprof­itable and was later replaced by a railway line. Rows of terraced housing were laid out inland from 1870.

Fulham council built a power station in 1901 and a larger distri­b­u­tion centre in 1936. On Townmead Road Macfar­lane Lang baked biscuits and Van den Bergh’s made margarine until the mid-1930s.

From the end of the Second World War the ware­houses, works and wharves progres­sively closed down, leaving a wasteland by the 1980s. Many of the larger Victorian terraced houses were split into to flats. The Queen Elizabeth – a public house at the corner of Bagleys Lane and Pearscroft Road – was converted to a youth hostel.

The council desig­nated Sands End’s river frontage a conser­va­tion area in 1991 to protect it from unsym­pa­thetic devel­op­ment, following some early excrescences.

A Sainsbury’s super­store has filled the site of the power station, Chelsea Harbour has been created in place of a former coalyard and the huge Imperial Wharf devel­op­ment has replaced the Imperial gasworks. Other projects have included the Harbour Club and apart­ments at Regent on the River.

There’s more to come soon, including the demo­li­tion of the Carnwath Road indus­trial estate and its replace­ment with yet more upmarket residences.

Sandford manor house, which now stands on Gwyn Close, at the end of Rewell Street, has been conserved (but not restored to its original state) and converted to offices. The house is grade II* listed – and hidden behind high walls and tall trees.

It is said that Nell Gwyn lived at Sandford manor house for a while, where Charles II visited her, but Nell was the sort of character who inspired many stories.

The essayist and politician Joseph Addison certainly lived at Sands End in the early 18th century, quite probably at the manor house.

* The picture of street cleaners, Bagleys Lane, at the top of this page is adapted from an original photograph, copyright Oast House Archive, at Geograph Britain and Ireland, made available under the Attribution-ShareAlike 2.0 Generic Licence. Any subsequent reuse is freely permitted under the terms of that licence. The picture of Sandford Manor House is lifted from Thomas Faulkner’s History of Fulham, digitised by Google.