A highly gentrified locality in central Fulham, arranged around a triangular green and the larger Eel Brook Common, which lies to its north-east 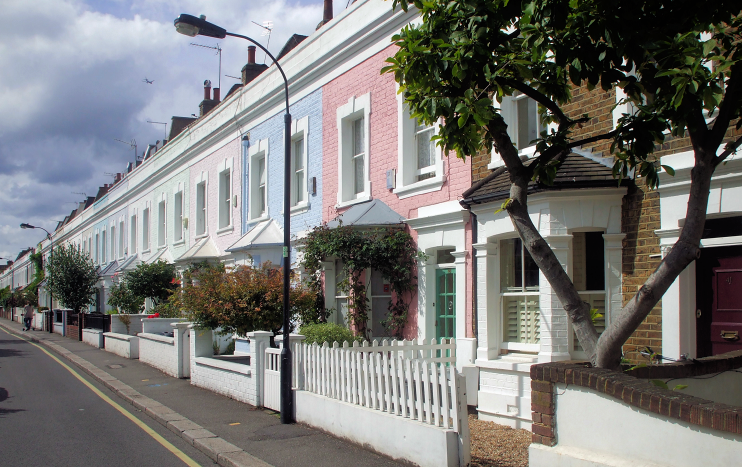 Evidence of an Iron Age settle­ment has been discov­ered at Lady Margaret school. The green’s name derives from the presence of Fulham rectory; which stood on the site of St Dionis’ church from the 14th century. A clump of trees on the west side of the green was known as Parson’s Grove by 1424. Parsons Green had only 16 ratepayers in 1625 and the village remained sparsely populated for the next two centuries.

The White Horse coaching inn was a meeting place for Fulham Albion cricket club, one of the first in England. It is said that the parson played bowls on the green in the early 18th century, when the old rectory was demol­ished and replaced by two brick-built houses. Wealthy Londoners were able to build country retreats here with spacious grounds because the land was not progres­sively subdi­vided into small tenements, as it was at nearby Walham Green.

From the 1840s suburban dwellings began to replace Parsons Green’s grandest houses, although some survived as schools.

The Midland District Railway opened a station in 1880 and within a decade an irregular grid of terraced houses had filled the entire vicinity. St Dionis’ church and the White Horse were rebuilt and the village pond, known as Colepitts, was drained.

Twentieth-century change was mostly limited to infilling, and the replace­ment of St Mark’s school, a Co-op dairy depot and some former light indus­trial premises by housing, shops and offices.

Following its enlarge­ment in 2002, a conser­va­tion area now takes in the whole of Parsons Green between New Kings Road and the railway line.

An Iraqi teenager was jailed for life in March 2018 for making and planting a bomb that partially exploded on a tube train at Parsons Green in September 2017, injuring 51 people.

In the early 19th century Maria Fitzherbert, the clandestine ‘wife’ of George, Prince of Wales (subsequently the Prince Regent, and then George IV) lived at East End House, which stood on the east side of the green.

Media queen Janet Street-Porter grew up in a ground-floor flat on Elmstone Road in the years immediately following the Second World War, when Fulham was a working-class district.

*The picture of Novello Street at the top of this page is slightly modified from an original photograph at Geograph, copyright John Lord, made available under the Attribution-ShareAlike 2.0 Generic licence. Any subsequent reuse is freely permitted under the terms of that licence.