Now ‘a metropolitan front door to London,’ according to the local council, but formerly Fulham’s less-favoured North End 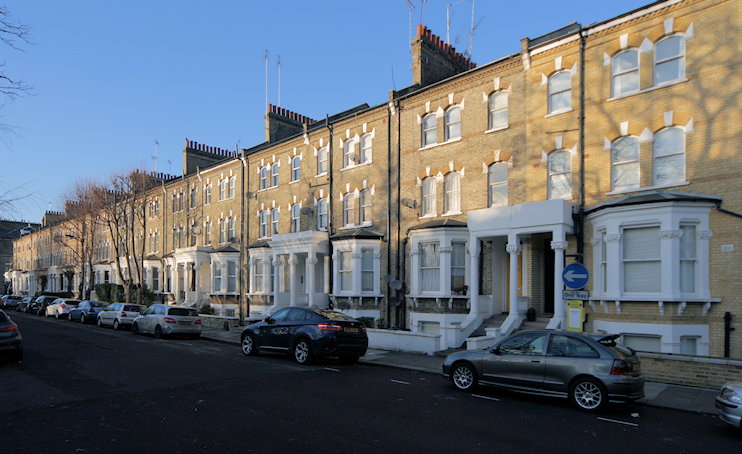 Several of the fields here were part of the glebe lands belonging to Fulham rectory and were used for archery practice from the late Middle Ages. When the arrows ceased to fly early in the 17th century the land was gradually sold off for building and a handful of grand houses appeared.

By 1745 a village had grown up on either side of North End Lane (now Road) between modern Lillie Road and Talgarth Road. The village began to expand rapidly after 1814, when a chapel was built on Hammer­smith Road that became St Mary’s church in 1835.

By the mid-19th century North End had became one of the largest settle­ments in the manor of Fulham, with a mix of dwellings that included multi-storeyed houses with basement quarters for servants, shabby terraces and some old cottages. Market gardens still filled the neigh­bouring fields.

North End station opened in 1874, prompting two Dorset builders – William Henry Gibbs and John P Flew – to select the village as the site for an ambitious scheme that they called the West Kens­ington estate, which they laid out on land that had belonged to the confec­tioner James Gunter (whose family orig­i­nated from Gunter­stone, or Tregunter, near Brecon). Their High Victorian archi­tec­ture was repet­i­tive but the terraced houses were grandly endowed with stuccoed bay windows and porticoes, enhanced by leafy plas­ter­work flour­ishes. Gibbs bought and enlarged Morn­ington Lodge as his own home.

The two entre­pre­neurs persuaded the railway company to change the name of the station to West Kens­ington and built over 1,200 homes here but depressed market condi­tions in the 1880s brought the process to a halt, leaving vacant lots and unoc­cu­pied prop­er­ties. The absence of access routes across the two railway lines was another drawback and the West Kens­ington Estate Company went under in 1885.

The district’s rapid recovery was led by its popu­larity with artists (like Edward Burne-Jones and John Tenniel) and writers (like H Rider Haggard). In 1888–9 the architect James MacLaren built a studio house on Avonmore Road for the society portrait sculptor Henry Pinker. The house is now grade II* listed.

From the early years of the 20th century, West Kens­ing­ton’s desir­ability (espe­cially north of Talgarth Road) reached such a peak that devel­opers squeezed in more buyers by building mansion blocks, sometimes in place of existing rows of houses.

Fulham council demol­ished Morn­ington Lodge in the process of putting up some flats in the 1920s. With the opening of the West Cromwell Road in 1942 access was at last improved, although at the expense of some Gibbs and Flew houses.

St Mary’s church was completely destroyed by a flying bomb in June 1944. Its replace­ment was conse­crated in January 1961. The council built exten­sively but not prettily in the southern part of the district in the decades after the Second World War, culmi­nating in the West Kens­ington estate of the early 1970s, which is shown in the photo­graph on the right.

On the east side of the district, William White­ley’s former furniture depos­i­to­ries now form the nucleus of a business park called Kens­ington Village.

West Kens­ington is a densely built-up area with very few open spaces. A small bipartite park at the northern end of North End Road is named in honour of Marcus Garvey, ‘Jamaica’s first national hero’, who spent his latter years living in this locality.

The area’s slightly seedy post-war repu­ta­tion has receded (but not entirely disap­peared) in recent times with the arrival of a stream of young profes­sionals. More than half the residents of the North End ward have a degree and a similar propor­tion are single.

The defi­n­i­tion of the West Kens­ington area has contracted over the last century, in part because Fulham has shed its down­market image, but many residents of the streets branching off the North End Road are still keen on the Kens­ington cachet.

Scottish residents of West Kensington have included Whisky Galore author Compton Mackenzie, who lived on Avonmore Road as a child, and Renton and Sick Boy, who stayed in a Talgarth Road flat in the 1996 film Trainspotting.