The principal shopping street of Hammersmith, running from Hammersmith Broadway west to Stamford Brook, where it meets Chiswick High Road and Goldhawk Road 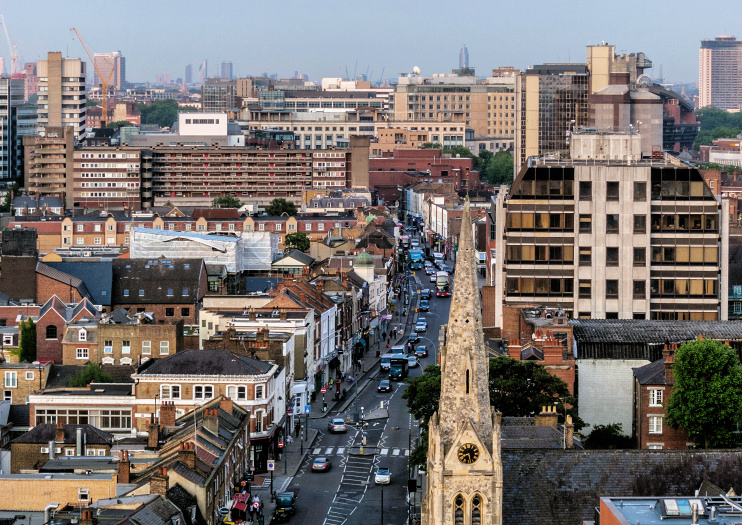 This was a turnpike road from 1717 and during the course of the 18th century it acquired houses, inns, stables and Cromwell’s brewery. Before it was covered over, Stamford Brook used to open out into a creek near the brewery. King Street gained its present name around 1794.

River­court Methodist church was built on the corner River­court Road and King Street in 1874–5. The church’s 125-foot tall spire is visible in the photo­graph above,* which shows the view looking eastward down King Street from the Premier Inn.

Shops began to line the street towards the end of the 19th century. King Street was widened in the 1930s, when Hammer­smith town hall was built and many of the original shops were demol­ished. The construc­tion of the A4 two decades later relieved the street of its role as part of the Great West Road.

Nowadays, the big-name stores are clustered towards the eastern end, including those within the Ashcroft Square precinct and (just beyond the end) at the Broadway shopping centre. Ingka Centres, the property arm of Swedish furniture retailer Ikea, bought the Kings Mall in January 2020 and relaunched it just over two years later as Livat Hammer­smith, “a unique expe­ri­ence that goes far beyond just shopping … anchored by IKEA.”

The Lyric theatre is a focal arts venue for west London. A gilt and velvet audi­to­rium has been rebuilt inside this 1970s concrete structure. Lyric Square host a farmers’ market on Thursdays. It’s partic­u­larly noted for its freshly prepared takeaway food.

The Latymer arts centre, at 237 King Street, is a private facility for Latymer upper school with a four-storey atrium serving as a theatre foyer and art gallery. 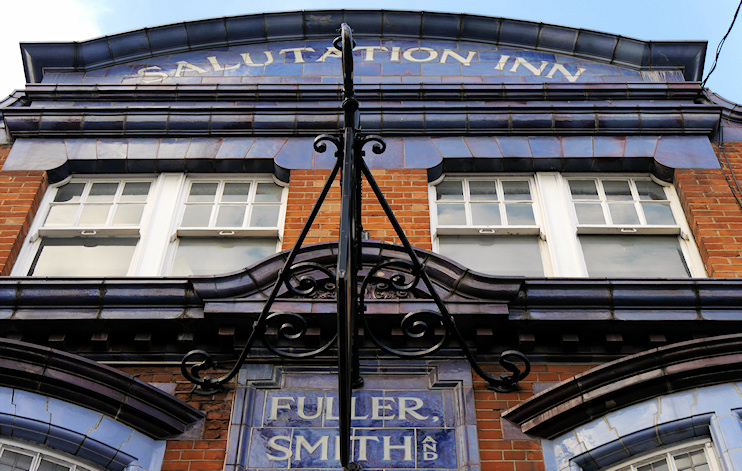 Shown in the photo­graph above,* the azure and aubergine tiling of the Salu­ta­tion Inn consti­tutes one of King Street’s few archi­tec­tural high­lights. The Salu­ta­tion was built in 1910 on the site of a Victorian pub of the same name. Awarding it a grade II listing, Historic England says this is “a rare and complete survival in London of the use of lustrous finish faience tiling.” It’s a very pleasant place inside too, with several original details intact. The map below is centred on the ‘purple pub’.

The western part of King Street has a strong Polish presence, with retailers, services and the Polski Ośrodek Społeczno Kultur­alny w Londynie, a social and cultural centre that incor­po­rates a theatre and a restaurant.

† The picture of King Street, seen from the Premier Inn, at the top of this page is a slightly modified version of an original photograph, copyright Peter McDermott, at Geograph Britain and Ireland, made available under the Attribution-ShareAlike 2.0 Generic Licence. The picture of the Salutation is adapted from an original photograph by Edward Hands at Wikimedia Commons, made available under the Attribution-ShareAlike 4.0 International licence. Any subsequent reuse is freely permitted under the terms of those licences.