Designed by Ralph Erskine, the Ark is a 10-storey copper and glass office block located at 201 Talgarth Road, over­looking the Hammer­smith flyover. So called for its shape, the Ark was completed in 1992 but initially failed to find a tenant after the Swedish company that comis­sioned its construc­tion ran into financial diffi­cul­ties. The drinks and media conglom­erate Seagram leased the Ark as its UK head­quar­ters from 1996 until the busi­ness’s demise in 2000.

German real estate group Deka bought the Ark in 1997 for £43 million and sold it in 2006 for £49.5 million – not a remark­able profit. The building had orig­i­nally been touted as pioneering the concept of ‘the office as a community’ but it was inter­nally recon­fig­ured at great cost in 2008, doing away with its central ‘village’ to increase the lettable floor area.

Having remained empty for much of its existence despite attempts to market it for both single and multiple tenancy, the Ark has been variously described as a white elephant and an albatross (neither of which were mentioned in Noah’s inventory).

Primary occupiers and owners General Electric put the Ark on the market in September 2012 for £79 million. A year later it was sold to Citibank, on behalf of uniden­ti­fied private investors.

Press Gazette reported in October 2019 that Asso­ci­ated News­pa­pers “has its eye on The Ark building”, adding that the Daily Mail and Mail on Sunday could leave Kensington’s North­cliffe House for Hammer­smith by 2023, according to sources. However, there seemed to be no sign of this happening as of November 2022.

In 2022/23 the building was stripped back to the shell and core and then refur­bished. The project also included recon­fig­ured land­scaping to create new pathways surrounded by stone seating, shrubbery and paving. 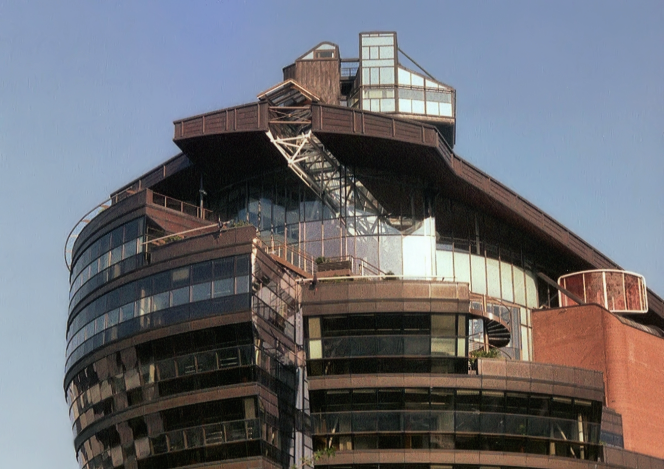