A public park and its neighbouring residential locality, situated at the western end of Hammersmith 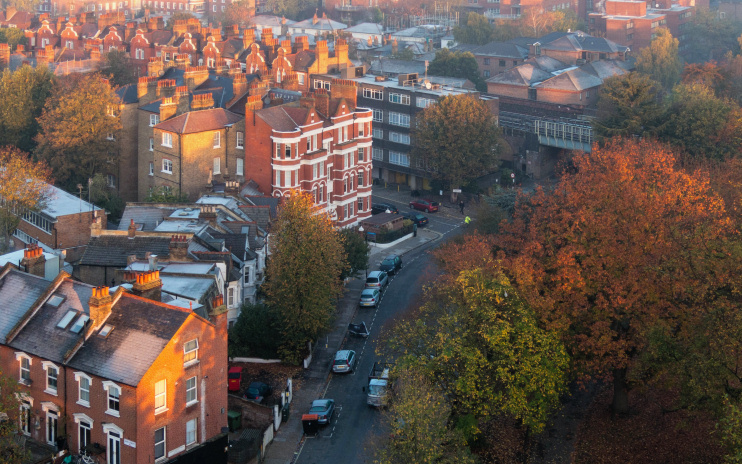 From at least the 14th century this was the manor of Pallingswick or Paddenswick. In 1746 Secretary to the Admiralty Thomas Corbett bought the estate and rebuilt the manor house, naming it Raven­scourt after the bird on his family’s coat of arms. Parts of the 80-acre estate were leased to tenant farmers after Corbett’s death.

George Scott, who lived at Raven­scourt from 1812 to 1859, progres­sively sold off chunks of his land for house­building and insisted on high standards of archi­tec­ture and construc­tion. He also improved the parkland and added flower gardens. Some of the new houses were soon demol­ished during the building of the railway that cut across the southern end of the estate. The station opened in 1877, and was called Shaftes­bury Road for the first eleven years of its existence.

In 1887 Scott’s heirs sold Raven­scourt and 32 acres of grounds to the Metro­pol­itan Board of Works, which converted the gardens into a park. “To my mind this indeed is the most beautiful park in London,” wrote WH Hudson in Birds in London in 1898.

Queen Charlotte’s hospital (now merged with Chelsea hospital and situated in Wormwood Scrubs) opened in a large Victorian house on the west side of the park in 1929. Two years later the Royal Masonic hospital replaced some neigh­bouring houses. Later called Raven­scourt Park hospital, it is presently proposed to become the London Inter­na­tional, described as ‘London’s first inde­pen­dent super speciality hospital’. However, this project appears to have proceeded more slowly than had been expected.

The site of Queens Charlotte’s hospital has been rede­vel­oped with housing, a community centre, doctors’ surgery and shops. Former nurses’ accom­mo­da­tion at the Royal Masonic has been converted to the flats of Ashlar Court.

The mansion called Raven­scourt served as a public library in its later years but was destroyed in an air raid in 1941.

Raven­scourt Park was desig­nated a conser­va­tion area in 1974 and plans to demolish old houses in Paddenswick Road were abandoned.

Half of Raven­scourt Park’s residents are single and a similar number are univer­sity-educated. Among the area’s many ethnic minori­ties the Polish community is the most visible, with a cultural centre on King Street and specialist shops nearby.

The northern tip of Ravenscourt Park is still named on some maps as Starch Green. Earlier called Gagglegoose Green, it had a pond that was filled in c.1926. Starch Green acquired its name from the laundries that operated hereabouts in the 18th and 19th centuries. Another speciality of this micro-district was rabbit-breeding for the City meat markets.

* The picture of Ravenscourt Park, seen from the Premier Inn, at the top of this page is a slightly modified version of an original photograph, copyright Peter McDermott, at Geograph Britain and Ireland, made available under the Attribution-ShareAlike 2.0 Generic Licence. Any subsequent reuse is hereby freely permitted under the terms of that licence.