A residential district lying south of Hornchurch, interspersed with commerce and industry, particularly along New Road 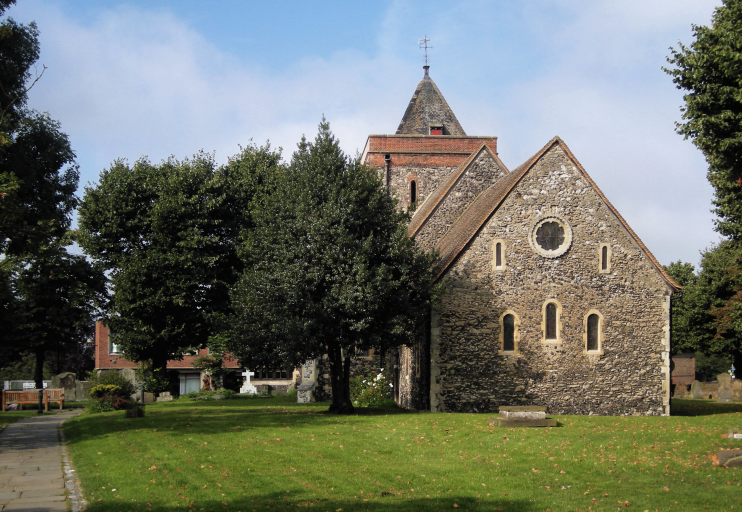 Because of its situation beside the Ingre­bourne River, with access to the Thames via Rainham Creek, there appears to have been human occu­pa­tion of this area virtually since the ice retreated. Prehis­toric imple­ments have been found in Rainham Marshes and there is evidence of a Saxon burial ground. The name is probably a corrup­tion of Reoginga-ham, from the Old English for ‘settle­ment of the ruling people’.

The church of St Helen and St Giles was built c.1178 by Richard de Lucy, who also founded Lesnes Abbey on the other side of the Thames. It has survived (unlike the abbey) as one of the best preserved medieval struc­tures in outer east London.

Rainham Hall was built in 1729 for John Harle, a sea captain from South Shields who had married a Stepney widow and acquired Rainham Wharf. This compact red-brick house is a rela­tively late example of the English domestic baroque style.

Rainham grew rapidly from the end of the 19th century, following the typical pattern that begins with larger villas for the well-off and then gives way to cheaper accom­mo­da­tion for the masses as advance­ments in transport provide improved accessibility.

Between 1945 and the end of the century Rainham doubled in size as a result of the seemingly uncon­trolled construc­tion of housing on former farmland north of the A13, where there is also a large Jewish cemetery. Beyond this is Launders Lane, where London’s only road bowling contests used to take place on Sunday after­noons until a few years ago.

Rainham Hall was given to the National Trust in 1949. A £2.5m restora­tion project was completed in 2015 and the house is now open more often than it used to be, with increased community involvement.

There are suffi­cient remaining elements of old Rainham to suggest what a charming marshland village this once was, but these have been engulfed by unsightly additions from the second half of the 20th century. Rainham Hall and the neigh­bouring church, for example, gaze across the road at a library and social services offices that are truly offensive.

Strad­dling the borough boundary to the west, the new neigh­bour­hood of Beam Park is taking shape on a site that previ­ously formed part of the Ford’s sprawling Dagenham plant. Around 4,000 homes will be built and a new c2c station may (or may not) open beside Marsh Way. The neigh­bour­hood takes its name from the Beam River, also known as the Mardyke (here) and the River Rom (where it passes through Romford). The ‘Beam’ name orig­i­nally referred to a tree-trunk foot­bridge across the river.

* The picture of the church of St Helen and St Giles at the top of this page is adapted from an original photograph by ‘Fay1982’ at Wikimedia Commons, made available under the Attribution-ShareAlike 3.0 Unported licence. Any subsequent reuse is hereby freely permitted under the terms of that licence.