A desolate landscape of marshland and silt lagoons situated east of Rainham Creek, and part of the ecological and development zone sometimes called Havering Riverside 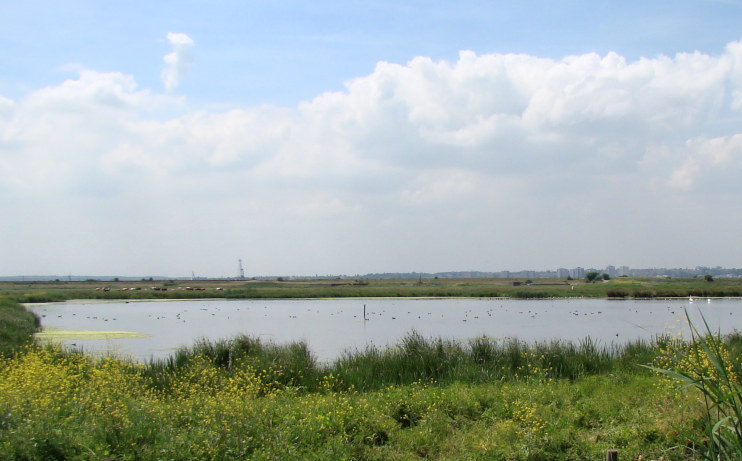 In the Middle Ages the monks of Lessness Abbey their sheep on the pasture here, and around 400 acres were in arable use in 1309. The first incar­na­tion of the Three Crowns inn may have been built beside Rainham Creek as early as 1550, serving passen­gers for the Rainham ferry, which carried Canter­bury-bound pilgrims across the Thames. The agri­cul­tural land was extended by 185 acres through recla­ma­tion in the 17th century.

The Three Crowns was rebuilt in the early 19th century and wharves and indus­trial premises appeared on the river­front from the 1880s and later filled much of Ferry Lane.

In 1906 the War Office bought a swathe of the mudflats for use as rifle ranges, but these became rela­tively inactive after the Second World War.

The Three Crowns was mostly demol­ished in the early 1970s, and more recently the rerouted A13 and the Channel Tunnel rail link have been constructed across the marshes.

In 2000 the Royal Society for the Protec­tion of Birds acquired 850 acres of Rainham, Wennington and Aveley Marshes from the Ministry of Defence for the creation of the society’s only nature reserve in Greater London. Not surpris­ingly, the reserve is of partic­ular note for its diverse avian popu­la­tion, espe­cially its wading birds, wintering wildfowl, finches and birds of prey. The reserve also supports some scarce wetland plants and insects and has one of the highest densities of water voles in the country. Shown in the photo above, Rainham Marshes visitor centre has been built across the London border in Purfleet, Essex.

* The picture of Coots in the large lake in Rainham Marshes Nature Reserve at the top of this page is adapted from an original photograph, copyright Robert Lamb, and the picture of Rainham Marshes Visitor Centre is adapted from an original photograph, copyright Des Blenkinsopp, both at Geograph Britain and Ireland, made available under the Attribution-ShareAlike 2.0 Generic Licence. Any subsequent reuse is freely permitted under the terms of that licence.