A remote and dispersed marshland village situated two miles south-east of Rainham, on the outer edge of east London 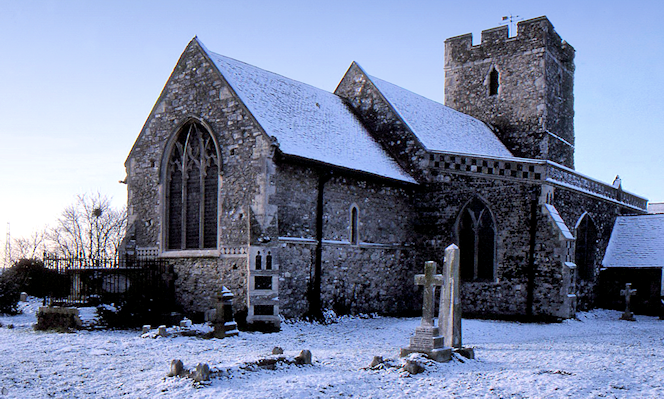 First recorded in the tenth century as Winintuna, this was probably the home of a Saxon chief named Wynna. West­min­ster Abbey held the manor of Wennington from 1066, and possibly from consid­er­ably earlier.

A manor house was in existence by 1198 and the church of St Mary and St Peter (shown in the photo above*) was built around this time. Much of the fabric of the present church dates from the 14th century.

The manor house was called Wennington Hall by 1345 and was probably plundered in the Peasants’ Revolt of 1381. The principal manor became known as Wennington West­min­ster to distin­guish it from neigh­bouring Wennington Enveyse and was briefly seized by the Crown in the 14th century when its tenant landlord was impris­oned as a rebel.

The area of the manor varied greatly over the centuries but reached a peak in 1664, when it covered 563 acres, which consisted mostly of marshland that had been progres­sively reclaimed over several centuries.

Noke (or Noak) House was built in the 17th century and in 1808 it became the joint workhouse for Rainham, Aveley and West Thurrock. It served this purpose until 1836 and was later converted into five cottages.

Wennington Hall, which had become a farmhouse, was rebuilt in the early 1850s and was later modified and refaced with red brick.

Arguably, Wennington’s heyday came during the 60 years following 1868 when the training ship Cornwall was moored at nearby Purfleet and terraced cottages were built here for some of the staff, with a neigh­bouring laundry. A few council and private houses were built near the square village green in the 1920s, when the popu­la­tion reached a peak of 432.

Several of the village’s older buildings were demol­ished in the second half of the 20th century, but survivors include three groups of cottages – and Wennington Hall Farm, near the junction of Wennington Road and New Road.

On 19 July 2022 a wildfire inflicted disas­trous damage across the village, destroying two rows of terraced houses and four other homes. The fire, which is believed to have begun in a back garden, possibly in a compost heap, ravaged almost 100 acres (40 hectares) of grassland, farm buildings and stables. Aerial photographs of the Wennington fire dominated the front pages of Britain’s national news­pa­pers on the following day.

The village has around 300 inhab­i­tants, most of whom live in houses scattered along the south side of Wennington Road. To the south lie the barren Wennington Marshes, which now form part of the RSPB’s Rainham Marshes nature reserve.

Located to the north-east of the village, and just inside the Greater London border, Ingre­bourne Links golf and country club is the capital’s largest such amenity, covering more than 360 acres (146 hectares). The site formerly consisted of poorly restored sand and gravel workings, some of which had been used for landfill.

* The picture of Wennington church on this page is adapted from an original photograph, copyright Christopher Hilton, at Geograph Britain and Ireland, made available under the Attribution-ShareAlike 2.0 Generic Licence. Any subsequent reuse is freely permitted under the terms of that licence.