A ‘people’s suburb’, as its developer described it, in eastern Ilford 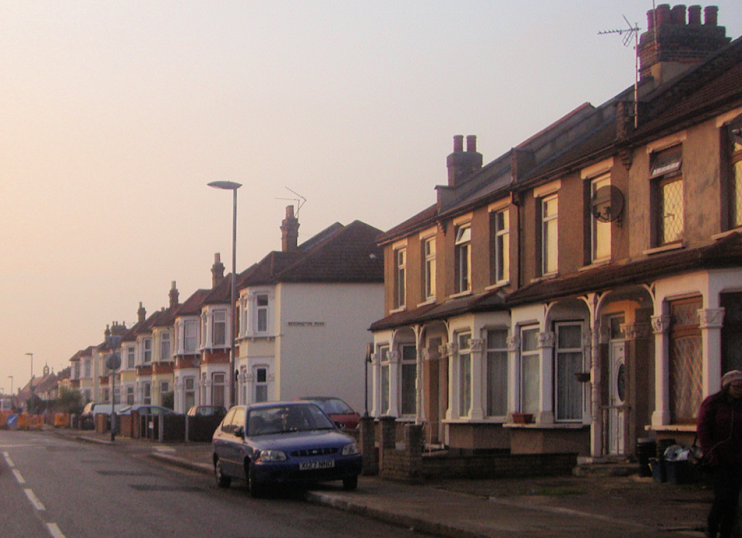 This place probably began its existence as Seofecingas, meaning ‘settle­ment of Seofeca’s people’. Seofeca may (at best) have been a local Saxon chief.

In 1285† the spelling was rendered as Sevekyn­gges – and it must have been around this time that someone noticed a resem­blance to the words ‘Seven Kings’. All subse­quent appear­ances of the place’s name employed this folksy corrup­tion, later embroi­dered with a whimsical story that its identity honoured an occasion when seven royal huntsmen paused here at a clearing in Hainault Forest, while their horses drank from a stream.

Seven Kings – or at least the part north of the High Road with the street plan that looks like an egg slicer – has been called “the town built in a year.” This was 1898–9, when local developer Cameron Corbett laid out an estate of good quality houses that clerks and lower grade civil servants could afford.

Because of its rapid growth and relative inac­ces­si­bility the new suburb was nicknamed Klondike by its first residents, but a station was quickly opened. With Corbett adding the Mayfield estate to the south and Downshall to the north, Seven Kings soon had 10,000 inhabitants.

Shown in the photo­graph on the right,* the grade-II listed Cauli­flower Hotel opened in 1900 on the site of an earlier public house. English Heritage describes it as “a good example of the opulent late-19th-century gin palace style with an imposing street presence … designed in a free Flemish/Jacobean style.”

The attrac­tive Seven Kings bungalow estate of the 1920s and 1930s is now a conser­va­tion area.

In 1991 Redbridge council tried to convert Seven Kings Park into a new cemetery, but was dissuaded by a 10,000-signature petition.

Like neigh­bouring parts of Ilford, Seven Kings has become popular with Asian families. At the 2011 census 25 per cent of residents were of Indian heritage, 16 per cent white British, 14 per cent Pakistani, 9 per cent Bangladeshi, 5 per cent black African and 4 per cent black Caribbean. Three-quarters of homes here are owner-occupied.

At Tate Britain, the artist Michael Landy created a full-size replica of his parents’ house at 62 Kingswood Road, on the Seven Kings/Goodmayes border. The installation, entitled Semi-detached, was demolished after the six-month show in 2004.

* The picture of Mead’s Lane at the top of this page is adapted from an original photograph, copyright David Howard, and the picture of The Cauliflower is adapted from an original photograph, copyright Robin Webster, both at Geograph Britain and Ireland, made available under the Attribution-ShareAlike 2.0 Generic Licence. Any subsequent reuse is hereby freely permitted under the terms of that licence.
† In the Essex eyre of 1285, veredictum of Becontree hundred, to the best of Hidden London’s knowledge