A 20th-century urban creation (plus a country park) situated in the north-east corner of the borough of Redbridge, three miles east of Woodford 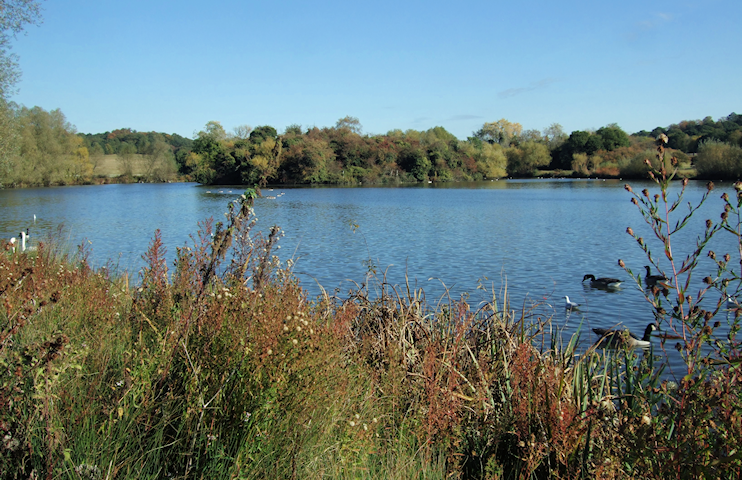 Hainault’s name comes from the Old English higna holt, meaning a ‘wood belonging to a monastic community’, in this case the Abbey of Barking. It was first recorded in 1221, as Henehout, and in 1513 it was spelt Heynold. According to AD Mills’s Dictio­nary of London Place Names, “the modern spelling, found only from the 17th century, is due to a ficti­tious connec­tion with Philippa of Hainault (1314–69), queen to Edward III.”

Hainault Forest once covered a swathe of the coun­try­side here (and stretching as far as Bark­ing­side and Marks Gate) but was savagely cleared in 1851, when more than 2,000 acres of trees (mostly oaks) were felled in the space of six weeks. New North Road was cut as a logging track for removing the timber, and farms and market gardens were estab­lished on the newly razed land, helping to feed London’s fast-growing population.

In 1902 Edward North Buxton, a Woodford resident and verderer of Epping Forest, persuaded the London County Council to acquire the remains of Hainault Forest and the adjoining land of Fox Burrows Farm, which was then replanted and reland­scaped. Hainault Forest country park, as it is now called, has woodland, meadows, plains, a lake (shown in the photo­graph above*) and a pair of golf courses, situated on the eastern edge of the satellite map below. The park is desig­nated a site of special scien­tific interest. The neigh­bouring Hainault Lodge local nature reserve is a 14-acre patch of woodland, rich in wildlife. The lodge itself has gone, but was once a residence of the high sheriff of Essex.

In the hope of encour­aging resi­den­tial devel­op­ment, the Great Eastern Railway opened a station at Hainault in 1903 on its newly built Ilford to Woodford branch line. Very few homes mate­ri­alised, and the company closed the station five years later as it was being used by fewer than 20 passen­gers a day. Hainault station reopened in 1930, when devel­opers were finally beginning to buy parcels of land for spec­u­la­tive house­building. The first streets of terraced and semi-detached dwellings were laid out to the west and east of the station and Hainault free church (later Baptist church) was founded in 1935.

In the mid-1930s the London County Council began to plan one of its ‘out-county cottage estates’ in the part of Hainault that was then a rural corner of Chigwell urban district – but the project was delayed by the outbreak of the Second World War. The LCC acquired the land in 1943 and construc­tion of the estate began in 1947. Almost 2,800 homes were built during the following six years, together with a shopping centre on Manford Way, Roman Catholic and Anglican churches and other communal amenities.

The extensive municipal housing ensured the lasting success of the reopened station, which came within the London Under­ground system in 1948.

At the same time as the cottage estate was taking shape, around 200 temporary, prefab­ri­cated houses were rapidly erected at the junction of Elmbridge Road and Forest Road, providing what was supposed to be short-term accom­mo­da­tion for returning soldiers and bombed out families from London. In the end, the Elmbridge Prefabs survived for around 20 years. Forest Road recre­ation ground now occupies the site of these homes.

South-east of the resi­den­tial zone, Hainault indus­trial estate was laid out in the early 1950s as part of the LCC’s master­plan. Following a period of decline, a 21st-century regen­er­a­tion project has made improve­ments to the estate, which is now called Hainault business park. More than 150 companies operate here.

On Elmbridge Road, the Gardens of Peace Muslim cemetery opened in 2002. It is now almost full and a new Muslim burial ground is being laid out to the south-east, on Five Oaks Lane. The multi-denom­i­na­tional Forest Park cemetery and crema­to­rium opened on Forest Road in 2005. It was the first new crema­to­rium to be built in London for over forty years.

The Forest Academy opened on Harbourer Road in January 2012 in place of the (failing) Hainault Forest high school, which had been built in 1951. The academy is sponsored by Beal high school. Hainault has three primary schools: Manford (the first school to open on the LCC estate), Coppice and John Bramston.

Hainault residents have tended to be white and compar­a­tively old, with low levels of educa­tional attain­ment. However, this is changing as all kinds of Londoners seek accom­mo­da­tion in rela­tively afford­able corners of the metrop­olis. The vast majority of homes are now owner-occupied, with most of the rest rented from the council.

During the 2012 Olympics temporary accommodation for 4,000 troops and security staff was built on land in Hainault Forest country park. After the games the ‘Snoozebox portable hotel’ was dismantled and the site was restored to its original condition.

* The lake was excavated in 1909 by unemployed men from Shoreditch. The picture of the lake is adapted from an original photograph, copyright Richard Hoare, and the picture of Manford Way is adapted from an original photograph, copyright Robin Webster, both at Geograph Britain and Ireland, made available under the Attribution-ShareAlike 2.0 Generic Licence. Any subsequent reuse is hereby freely permitted under the terms of that licence.