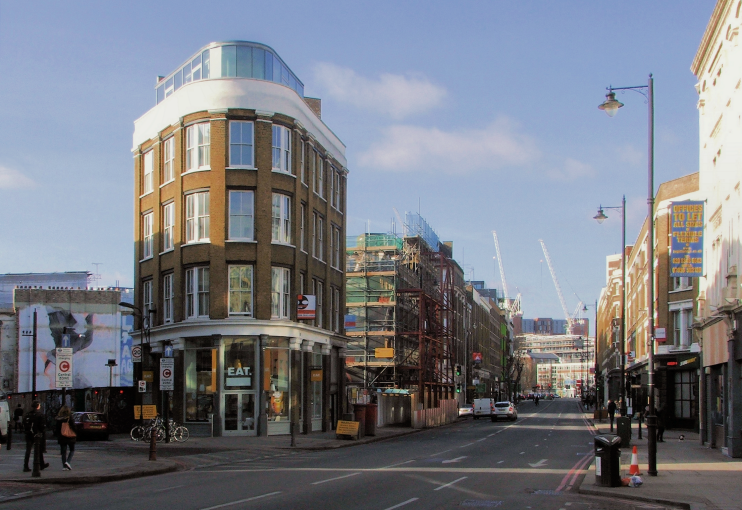 Shored­itch’s name is of Old English origin and refers to a dyke by a steep bank but the more fanciful expla­na­tion, espoused in Thomas Percy’s Reliques, is that Jane Shore, mistress of Edward IV, died in a ditch here in 1527.

Augus­tinian nuns founded a priory in Shored­itch in the twelfth century but signif­i­cant devel­op­ment did not begin in the area until the 16th century, when building extended northward from Bish­ops­gate. Houses lined the High Street and a few more ran westwards on Old Street. The Theatre and the Curtain were the first successful London theatres when they were built west of the High Street in the fourth quarter of the 16th century.

The parish – and later the borough – of Shored­itch extended as far north as Hoxton and Hagger­ston; the vicinity of the medieval village is now sometimes called South Shored­itch to distin­guish it from those outlying localities.

Shored­itch was one of the first ‘outer London’ districts to fuse with the City and the parish had around 10,000 inhab­i­tants by 1750, together with 15 almshouses and St Leonard’s church.

Within a hundred years the popu­la­tion had increased tenfold, with many residents working in local indus­tries – espe­cially the furniture, uphol­stery and timber trades. Phil­an­thropists and the borough and county councils replaced slum housing with blocks of flats but the area remained over­crowded until after the Second World War.

Central Shored­itch is still crammed with Victorian ware­houses and indus­trial buildings, contrasting starkly with the marble and glass of the neigh­bouring City of London. The printing, engi­neering, furniture and clothing indus­tries maintain a presence here but in the early 1990s Shored­itch became popular with a wide spectrum of the arts and media commu­ni­ties, ranging from sculptors to website designers. The trend stuttered as a result of rising rents – and perhaps an excess of hype – but the phenom­enon is far from dead.

Shored­itch House is a private members’ club and art-house cinema on Ebor Street, Shored­itch Town Hall has been restored as a cultural and leisure desti­na­tion and XOYO is a hip nightclub and live music venue on Cowper Street.

The south­ern­most tip of the district, beyond Worship Street, has the greatest concen­tra­tion of office blocks, merging geograph­i­cally and archi­tec­turally with the City.

Shoreditch Tw*t was a 2002 Channel 4 television production based on the content of a long-running fanzine (which did not use an asterisk) that lampooned the lifestyle of local media trendies.

Malcolm Needs’ unsuccessful 2003 film Shoreditch unravelled the mystery of a corpse found in the cellar of a derelict jazz club.

* The picture of Great Eastern Street at the top of this page is adapted from an original photograph, copyright Chris Whippet, at Geograph Britain and Ireland, made available under the Attribution-ShareAlike 2.0 Generic Licence. Any subsequent reuse is hereby freely permitted under the terms of that licence.