Until recently a solidly working-class neighbourhood, this north-western corner of Shoreditch is now popular with members of London’s creative industries 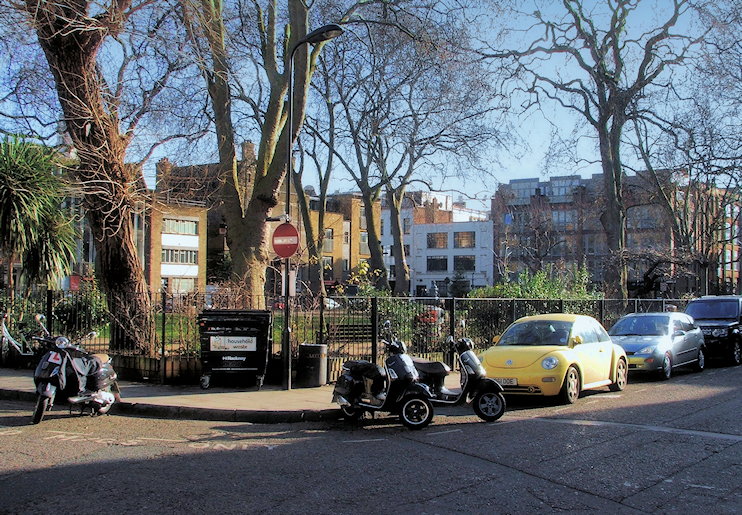 It is possible that hogs were once kept here (hence Hogsden, a widely used alter­na­tive spelling in the past) but more likely that the place name derives from a farm belonging to a man called Hōc. St Paul’s Cathedral owned the manor at the time of Domesday Book.

There were attempts in the 1680s to make Hoxton a sort of ‘North End’ to rival the West End, but the creation of Hoxton Square (shown in the photo­graph above*) and Charles Square failed to spark an inrush of wealthy home­buyers. Instead, Hoxton’s open spaces retained their market gardens and gained hospitals, schools and public houses.

In 1685 the wealthy Cornish merchant Sir Robert Geffrye donated land for almshouses on Kingsland Road where Hoxton meets Hagger­ston. These were completed in 1715 and are now home to the Geffrye Museum.

A number of religious dissenters came to live in Hoxton, most memorably the Ancient Deists, who believed they conversed with the dead.

In The Birth of Modern London, Elizabeth McKellar suggests that Hoxton’s unusual character encour­aged “an alter­na­tive building tradition even on the very edge of the commer­cial centre itself and ensured the continued survival of these buildings unmod­ernised throughout the 18th century.” The district’s piecemeal devel­op­ment encom­passed a wide range: from mansions to mean tenements. Hoxton Fields had disap­peared beneath Hoxton New Town by 1850.

Hoxton was home to the renowned Britannia Theatre, a music hall that Dickens compared with Milan’s La Scala. Built in 1858 it became one of Victorian London’s greatest palaces of enter­tain­ment. Converted to a cinema in 1923, then demol­ished after wartime bomb damage, its name lives on in the leisure centre at the corner of Shored­itch Park.

Hoxton Hall, a saloon-style music hall built in 1863, survives and is used for community arts and education purposes.

Slum terraces were replaced by blocks of council flats after the Second World War but these changes pale into insignif­i­cance compared with the trans­for­ma­tion that’s been wrought here since the turn of the millennium.

Presaged by the arrival of some pioneering creative types – as seen in 2005’s TV parody Nathan Barley – Hoxton has evolved into one of the most sought-after corners of hipster London. The ward’s popu­la­tion increased by 42 per cent between 2001 and 2011.

This has encour­aged property devel­opers to build ever more inten­sively, for example in the hexagonal form of Mono and Duo, the two towers of Hoxton Press shown under construc­tion in the photo below. The devel­op­ment is named in honour of the Mullord Brothers, fancy paper and card makers, fine art publishers and manu­fac­turers of stove ornaments (now there’s a lost art), whose Bijou Stationery Works stood on Penn Street in the late 19th and early 20th centuries. 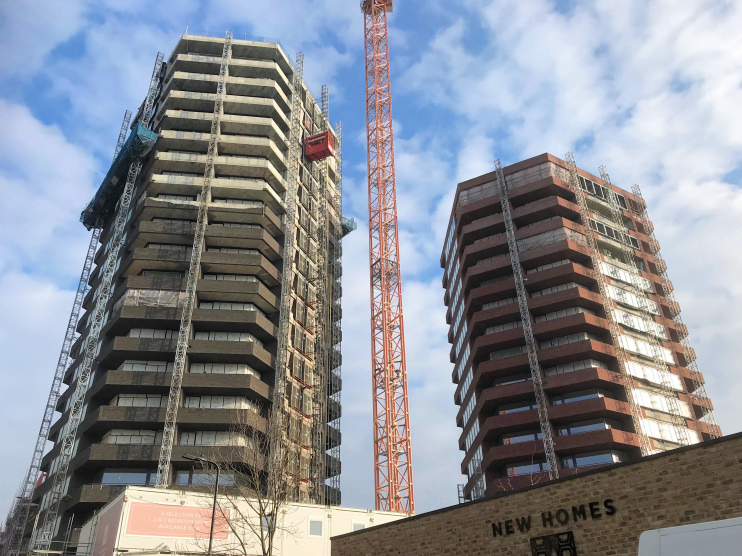 The poet and playwright Ben Jonson killed fellow actor Gabriel Spencer in a duel on Hoxton Fields in 1598, evading a death sentence because he could read from the Latin Bible.

The proto-feminist writer Mary Wollstonecraft was born in Hoxton, where her father was a silk weaver.

Among the professional men who settled here was James Parkinson of Hoxton Square. His Essay on Shaking Palsy, written in 1815, identified the disease that now bears his name.

The picture of Hoxton Square at the top of this article is adapted from an original photograph, copyright Chris Whippet, at Geograph Britain and Ireland and made available under the Attribution-ShareAlike 2.0 Generic Licence. The picture of Hoxton Press is minimally modified from an original photograph, copyright Matt Brown, at Flickr, made available under the Attribution 2.0 Generic licence. Any subsequent reuse is freely permitted under the terms of those licences.