A northern outpost of the borough, situated a mile north of Chadwell Heath, still surrounded by the fields of wheat, oats and barley that were once its raison d’être 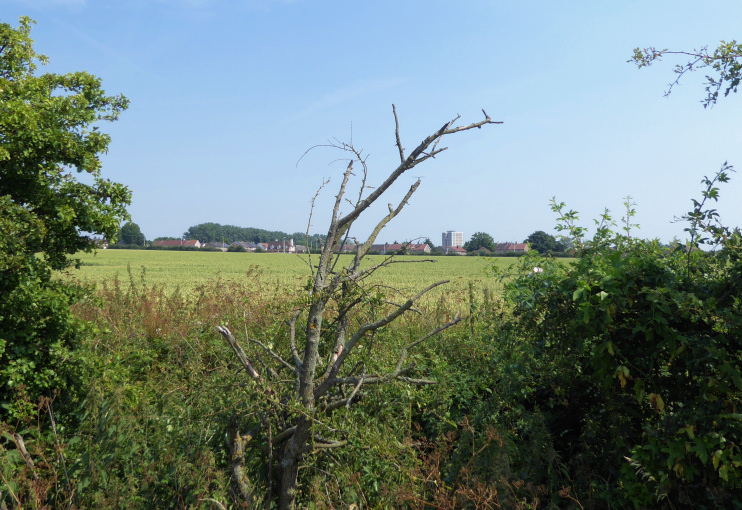 Around 600bc a fortified hilltop village was estab­lished here, of which almost nothing remains but the hill itself. The medieval manor of Marks was one of Barking’s oldest free tenements (an estate held for life or longer), with its own manor court from the 14th century and special rights in Hainault Forest.

Marks Hall, the 20-bedroom moated manor house, was built in the mid-15th century and demol­ished in 1808. The estate, which was much reduced over the centuries, was sold to the Crown in 1855. It is now part of Warren Hall Farm, where part of the moat survives, as does a 17th-century brick barn, which is still in use.

Nearby were two other hamlets, now lost. Roselane Gate had its own entrance to the forest, at the northern end of Rose Lane near the Harrow public house. Padnall Corner was virtually wiped out when the Eastern Avenue was constructed. It was located at the bend in Padnall Road and Padnall Hall stood to its west.

The photo­graph above shows part of Furze House Farm. ‘Marathon’, who took the picture, writes: “Although the fields here serve as a reminder of how most of Barking & Dagenham once looked, this partic­ular farmland is of rela­tively recent origin. In the early 19th century this land lay within Hainault Forest. The name ‘Furze House’ refers to the heathy nature of the forest, furze being an old name for gorse. It was only after the removal of the forest’s legal protec­tion in 1851 that this area was turned over to agri­cul­tural use.”

In 1934 Chadwell Heath cemetery opened on an eleven-acre site on Whalebone Lane North. It has since been extended by eight acres.

Dagenham council built an estate at Marks Gate in the late 1950s and much of the housing remains in municipal ownership. The northern edge of the estate is visible in the photo­graph at the top.

At the southern edge of the estate, Padnall Lake is used as a flood storage basin and is part of the local land-drainage system. Working with the local community, the Friends of Padnall Lake have imple­mented a package of envi­ron­mental improve­ments to increase habitat diversity, enhance the lake’s aesthetics and add ‘natural play facil­i­ties’ for kids. A remnant from the grounds of Padnall Hall has been planted as a community orchard. 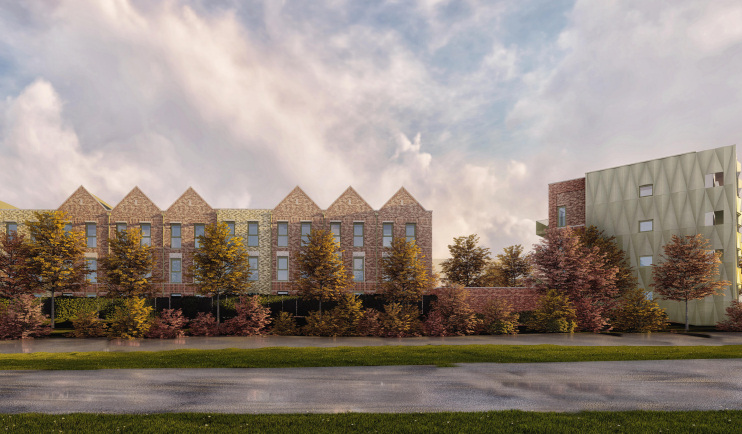 In November 2019 Barking and Dagenham council’s cabinet approved a £63m plan to build at least 200 ‘afford­able’ homes on a strip of council-owned grassland next to Padnall Lake. The master­plan has since evolved to envisage up to 300 modular homes designed for off-site manu­fac­turing, two supporting community spaces and a new public open space. Designed by the archi­tects HTA, some of the proposed homes are shown in the CGI above.

The City Pavilion (formerly City Limits) is a local leisure facility on Collier Row Road, with function rooms, bars, a restau­rant and a bowling centre.

* The picture of Furze House Farm and Marks Gate on this page is cropped and slightly modified from an original photograph, copyright Marathon, at Geograph Britain and Ireland, made available under the Attribution-ShareAlike 2.0 Generic Licence. Any subsequent reuse of the image is freely permitted under the terms of that licence. The licence also applies to Marathon’s commentary, quoted above.